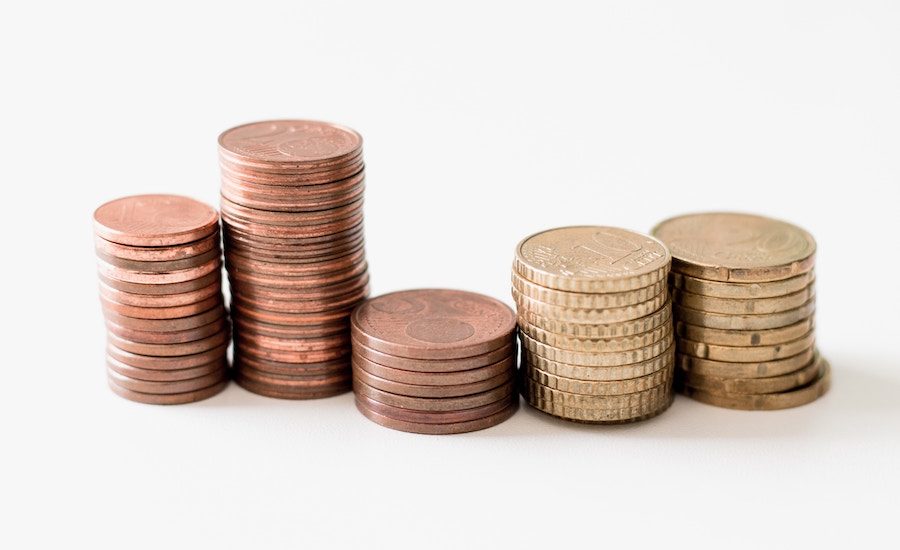 How, exactly, is fiscal policy related to human rights?

How, exactly, is fiscal policy related to human rights?

Taxes and expenditures are an increasingly frequent component in the debate on protecting human rights. But how, exactly, is fiscal policy related to human rights? This question had no clear answer until a few years ago, when the connection began to gain more recognition.

Fiscal policy is a fundamental part of States’ obligations to guarantee the fulfilment of human rights—in particular, Economic, Social and Cultural Rights (ESCR). The enjoyment of these rights, as recognized by the ESCR Committee, intrinsically depends on fiscal dimensions.

This new focus strengthens the human rights field´s arguments, and at the same time provides valuable tools of good governance to economic institutions that adopt human rights principles in their policy design.

Considering this, there are three ways in which fiscal policy and human rights can directly relate, which I will describe further below.

The first, and most obvious, is the use of resources for the enjoyment of human rights. Keeping in mind that human rights need resources for their fulfillment, the analysis of fiscal policy—and the ways it facilitates or obstructs the complete or progressive realization of rights—is key.

This relationship is the product of a notion that is becoming more and more clear: all rights have a cost. It is a fact that assuring the right to vote or to providing access to dignified living conditions requires a financial effort by the State. Thus, the way in which States gather funds, as well as the way they utilize them is fundamental for the realization of the rights of citizens. 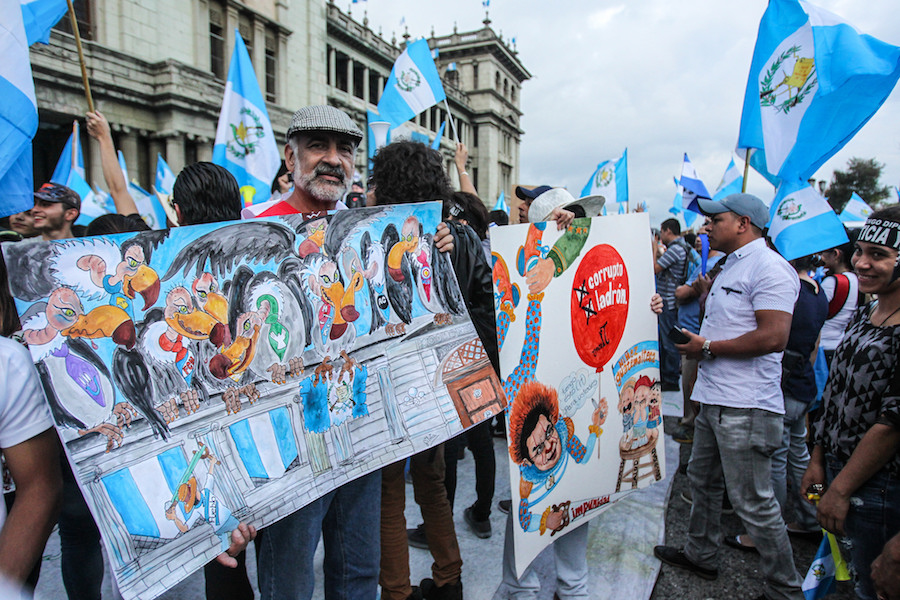 As a consequence of this relationship, particular treaties in the universal and the Inter-American systems of human rights have incorporated a financial element: the clause of “maximum available resources,” which can be found, for example, in the International Covenant on Economic, Social and Cultural Rights (Art. 2), in the Convention on the Rights of the Child (Art. 4) and in the San Salvador Protocol to the American Convention on Human Rights (Art. 1). This norm essentially indicates that States are obligated to guarantee the progressive access to human rights “to the maximum extent of their resources”—understanding that, in most cases, these resources are limited.

Just because they are limited, however, that is not to say that there are not ways to mobilize resources to guarantee the enjoyment of rights. Tax burden (the taxes that the State gathers, as a proportion of GDP) and the efficiency of taxation are crucial for being able to fulfill the human rights obligations that States have undertaken. Countries with high levels of tax evasion, or who provide benefits that limit tax revenue, are clearly violating the norm of maximum available resources by not utilizing all of the potential resources to assure progressive access to rights. Likewise, countries that demonstrate the greatest inefficiencies in public expenditures (they spend a lot and do little), or who have high levels of corruption, are also violating the norm by wasting available resources that could have been used to guarantee the realization of their people’s rights.

Seeking equality through taxes and transfers

Another form of fiscal policy that can play in the favor of human rights is the reduction of socioeconomic inequality. Although inequality was, for a long time, considered purely an economic matter, extreme inequality is now often considered a matter of human rights. According to Philip Alston, where extreme inequality exists, extreme poverty exists, and as such, grave violations of the human rights of the most vulnerable populations (especially in terms of economic, social, and cultural rights). Fiscal policy, by having the power to redistribute wealth within a society, is an important tool for closing socioeconomic divides and assuring the enjoyment of the rights of those who are disadvantaged. 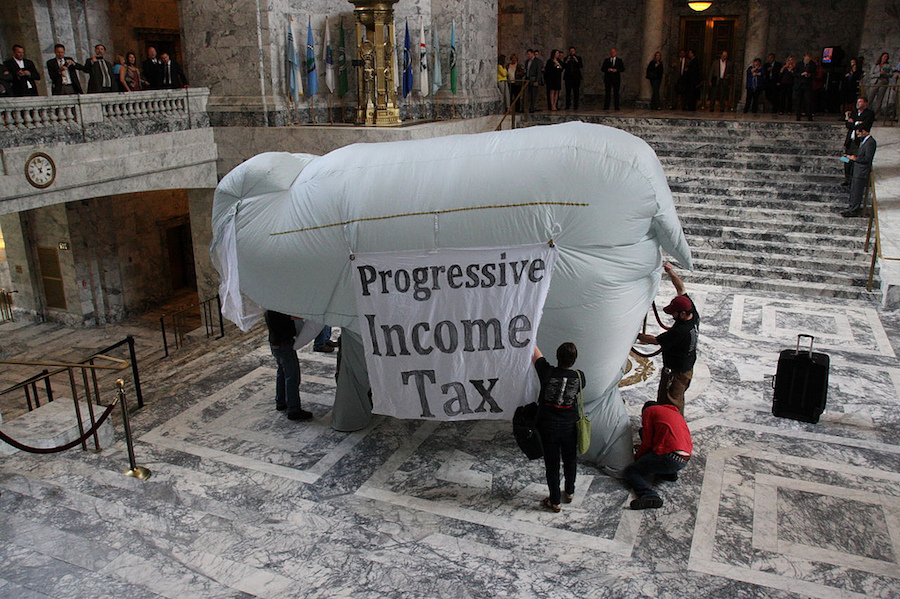 Activists set up an inflatable elephant in the Washington State legislature, USA to call for a progressive tax system. Source: Robert F.W. Whitlock, Flickr (CC BY 2.0).

To reduce inequality, fiscal policy has two mechanisms. On the tax side, tax systems must take on the task of progressively collecting taxes, that is to say, taxes proportional to the income and wealth of individuals. In this way, a greater portion of the taxes (a higher rate) are charged to those at the top of the income scale, while those at the bottom are charged a more marginal rate, or are exempt from taxes altogether.

With these resources, the State, by way of transferring public resources, can invest in public goods that provide for the progressive realization of the rights of all individuals. In the same way, by the targeted redistribution of resources to people in more vulnerable situations, States can assure the effective enjoyment of rights for populations marginalized by market dynamics, and can help to close socioeconomic divides.

Targeted taxes for the protection of rights

Finally, another form of connecting fiscal policy to the realization of human rights is through taxes that target goods and services that endanger the enjoyment of people’s rights. Taxes, by molding incentives for agents in the economic market, have the power to change behaviors and habits that contribute to the violation of rights.

This is the case, for example, with green taxes. This kind of tax is aimed at activities that deteriorate the environment and have direct repercussions on the enjoyment of ESC rights. Taxes on single-use plastics, which have been adopted by various countries for plastic bags, or taxes on carbon emissions are a few examples of green taxes that have been implemented in Europe and Latin America. 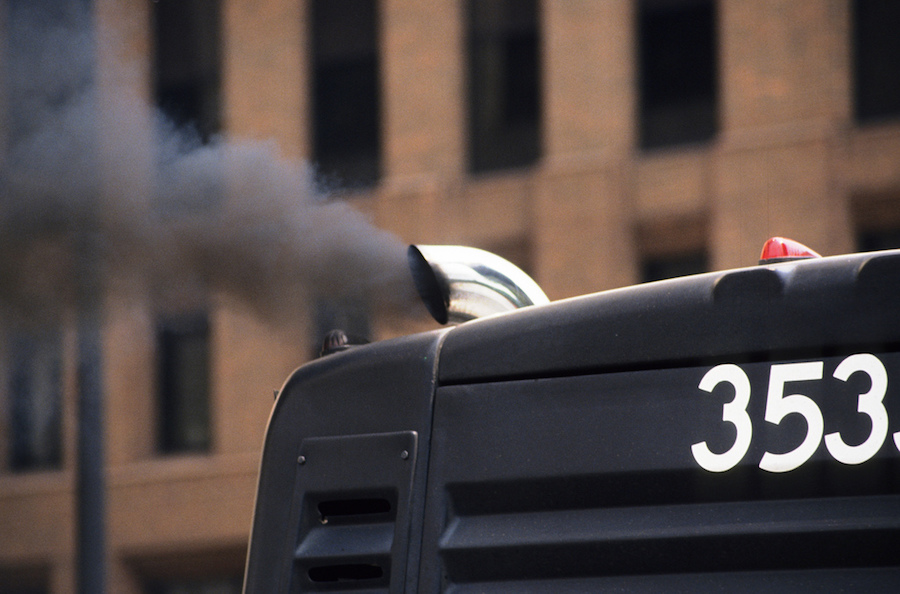 Some taxes are designed to disincentivize harmful activities and materials, such as carbon emissions.  Source: Wisconsin Department of Natural Resources, Flickr (CC BY-ND 2.0).

Another example is what is known as health taxes. This kind of tax is placed on food or other products that, in the short, medium, or long term, cause serious complications in the health of consumers. These taxes can be used to disincentivize certain habits and incentivize other, healthier options, resulting in the protection of the right to health. These additional taxes have been used in most places around the world for tobacco and alcohol; the taxes on sugary drinks in countries such as Mexico and Chile are another example of this kind of economic instrument.

In the case that these taxes don’t successfully disincentivize harmful health habits or the use of detrimental materials, the resources gathered through these taxes can be used to mitigate their negative impacts, thus protecting and guaranteeing associated rights.

While the introduction to this piece mentioned that in the last few years the relationship between fiscal policy and human rights has become clearer, there are still substantial challenges and tensions in the articulation of these two fields. For example, the development of a more profound framework for the “maximum available resources clause” is still greatly needed in order to establish consolidated standards for the systematic evaluation of compliance.

The adoption of human rights principles and guidelines in fiscal policy is still very weak. International economic actors such as the International Monetary Fund (IMF), the World Bank (WB), and the Organization for Economic Cooperation and Development (OECD) are still removed from the field of human rights and limited in their expertise in these topics. It is very important, then, to develop a framework that dialogues with both so that the design of fiscal policy considers the normative criteria of human rights. Several organizations in Latin America have already begun to work in this line, initiating also the collection of human rights principles and guidelines created by experts in both fields, which can be used when making fiscal decisions. The central objective of this initiative is to have more and more economic policies that are congruent with the human rights obligations of States.