States have the responsibility of protecting human rights violations that arise not only from climate impacts, but from actions taken to mitigate emissions or adapt to climate change.

States have the responsibility of protecting human rights violations that arise not only from climate impacts, but from actions taken to mitigate emissions or adapt to climate change.

Climate change is already impacting communities across the world. From rising sea levels in Bangladesh to droughts in Brazil, experts have called climate change the greatest human rights challenge of our time. Not only will it aggravate existing inequalities and threaten the right to development, but it will also disproportionately impact the poorest and most marginalized populations. The graphic below shows some of the implications particular climate impacts have. 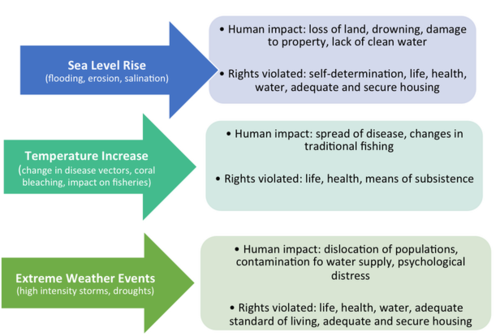 Based on the Maldives submission to the OHCHR in September 2008.

Coal is the dirtiest fossil fuel and responsible for one-third of all CO2emissions. The coal industry presents a particular challenge to human rights not only because coal is a main driver of rising temperatures, but because its extraction and transport also lead to serious human rights violations.

We have heard over and over again that “coal is dead”. A significant number of coal plants in the Global North – mainly in the United States, Australia and Europe – have closed in the past few years. The divestment movement has increased momentum towards ending financial support for coal exploration and burning. New reports have demonstrated that coal is not the answer to energy poverty. Even the World Bank has announced it will limit its financing of coal plants to “rare circumstances”. More and more leaders have made clear the imperative to reduce greenhouse gas emissions from coal. And yet the notion that “coal is dead” is nothing more than an illusion.

According to a U.S. National Academy of Sciences report in 2014, global coal consumption has actually risen in the past decade. Coal exploration continues to ravage countries in the Global South, particularly given growing demand in other developing and developed countries. In 2012, the World Resources Institute identified 1,200 new coal plants planned worldwide, with approximately 75% of them located in China and India. It is expected that it will break the 9-billion-tonne level by 2019 (in 2014 production was almost 7.8 billion tonnes), presenting a major challenge to the reduction of global emissions and the human rights of communities affected by coal production.

Colombia is an example of a country that has recently become a victim of its own dependency on coal exploration. Despite the fact that Colombia does not use most of the coal it produces – it exports 92% of it to countries like the Netherlands and the United States – its population is highly vulnerable to the impacts of coal burning and human rights violations by the coal industry.

As the largest contributor to climate change and the high social costs associated with its production, we must frame coal as a human rights issue. Applying a human rights lens to climate change impacts as well as its drivers provides an opportunity for a more holistic approach than current frameworks. As Mary Robinson said earlier this year: “a focus on rights can inform and strengthen our response and maximize the effectiveness of our local, national and international climate actions.”

Experts have argued that existing duties under human rights should be extended to climate change, particularly considering an increasing recognition that environmental impacts constitute human rights violations. As John Knox, United Nations Special Rapporteur on human rights and the environment, has argued: “The protection of human rights and a healthy environment are mutually reinforcing.”

States have the responsibility of protecting human rights violations that arise not only from climate impacts like the ones described in the beginning of this blog, but from actions taken to mitigate emissions or adapt to climate change. This means that whatever measures we take to reduce emissions (e.g. stop coal extraction or build hydroelectric plants) should not violate human rights. Coherence among different international regimes is crucial.

While the status quo is perpetuated, coal extraction, transport, export, and burning will continue to present gross human rights violations. This will be felt not only in the lives of communities who live nearby coal extraction or transport sites, but by those who are vulnerable to the devastating impacts of fossil fuel burning.

World leaders are expected to deliver a climate agreement to keep average global temperatures below 2˚C at the end of this year. A human rights and climate change working group has urged State parties to the UN Framework Convention on Climate Change to include human rights obligations in the new accord. This would strengthen our current response, build coherence among different international regimes, and ensure the protection of human rights in the face of continued coal production and burning.

More information on the effects of climate change and the full enjoyment of human rights can be found here.