Human Rights in Times of Austerity, Who Should Answer? 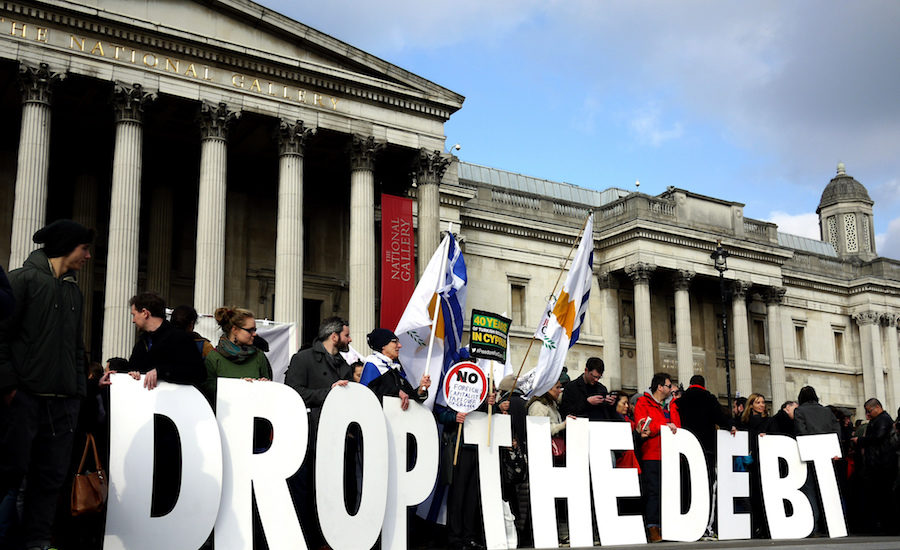 The adjustment policies that resulted from the Troika negotiations have meant a heavy weight that, as in Aeschylus’s tragedy, have fallen relentlessly and ruthlessly on the human rights of the Greek people.

The adjustment policies that resulted from the Troika negotiations have meant a heavy weight that, as in Aeschylus’s tragedy, have fallen relentlessly and ruthlessly on the human rights of the Greek people.

Greece, the cradle of democracy, confronted one of the bitterest elections this year. In these elections, the general sensation was of the impotence of democracy in the face of the iron grip of austerity. “Why should we vote if its not going to change anything”? a Greek citizen interviewed on TV explained. This general sensation is, perhaps, what explains that the level of abstention in this latest exercise in democracy was the highest in the country’s history.

And it’s no wonder. The adjustment policies that resulted from the Troika negotiations have meant a heavy weight that, as in Aeschylus’s tragedy, have fallen relentlessly and ruthlessly on the human rights of the Greek people, even when they had refused to accept them with the triumph of the resounding NO in the July 5 referendum. Since the adjustment programs began, the Greek GDP has fallen 25 percent, child poverty has reached 28.8 percent, youth unemployment reached 52.4 percent, and the number of households with no one working is over 350,000. The impact has been so strong that the fertility rate has reduced, and the number of suicides has soared: austerity has created a society that is uncertain of and desperate about its future.

The Committees responsible for monitoring United Nations human rights treaties have recognized that austerity has disproportionately affected some populations. The Committee for the Elimination of Discrimination against Women noted with concern that women’s unemployment was 31 percent, in comparison to 24 percent for men, and highlighted that pension cuts had negatively affected widows and other groups of women. The Committee also warned of the high rate of women in part-time and forced labor. Other studieshave shown that the gender gap in the labor market has increased as a result of the crisis.

The Committee on the Rights of the Child warned of the negative effects that public spending cuts were having on services provided to children, and the increased pressure subsistence spending represents for families to cover their basic necessities, such as food, fuel, housing, and in particular health and public services, various of which have been privatized. It also noted the lack of transparency in fiscal information and the absence of studies that could identify the true impact of austerity on the rights of children.

Doubtless, the Greek governments that increased the debt levels, backed by practices that Goldman Sachs questioned, in order to hide the real deficit is responsible for what happened. Later governments that did not adopt adjustment policies that respected human right standards that must be met even during economic crises are also to blame. But the maneuvering room of governments such as Tsipras, the leader of the Syriza party, has been seriously restricted. The loan conditionalities imposed by the European Commission, the Central European Bank, the International Monetary Fund, and the European Stabilization Fund, under the control of Germany that refused to accept debt restructurations such as those that the international community granted it after the two world wars have not been built in the framework that allows to minimize the human rights impacts on the Greek people, and has left few alternatives to this country’s government. Although today there are legal instruments that permit claims of extraterritorial responsibility against countries for decisions that violate ESCR taken in these types of multilateral spaces, as is the case of the Maastricht Principles or the Principles of State Responsibility for Internationally Wrongful Acts, which the International Law Commission adopted in 2001, the procedural mechanisms by which such responsibility may be alleged or enforced are not clear.

The Committee for the Elimination of Discrimination against Women already emphasized that financial and economic measures the Greek State adopted to address its situation, designed in collaboration with European Union institutions and the International Monetary Fund (IMF) “are having prejudicial effects on women in all spheres of life.” The Human Rights Council adopted, in a 33 to 5 vote, in which practically all Global South countries voted in favor and the richest countries against, a Declaration on the effects of foreign debt and other related international financial obligations of States on the full enjoyment of all human rights, particularly economic, social and cultural rights. But there is still a long path ahead before necessary corrective steps are taken so that human rights obligations prevail over the mandates of a financial order that creates increasing injustice and avoidable suffering.

The Greek crisis has showed that, even when the voice of the people whose rights are sacrificed for the interests of creditors opposes it, a country cannot, acting alone, force international financial institutions to accept the restructuration of a debt that the very IMF recognizes is unsustainable. This impossibility shows that, in the current economic order, there is a failure to make human rights prevail over other considerations.

In a world of inequalities, in which human rights and democratic decisions cannot be used as trump cards against the interests of more powerful actors oft he international financial system, or the trade and investment regime, Global South countries, together with the most exposed countries of Europe, face and enormous challenge: establishing mechanisms to make the multiple responsibilities of human rights violations enforceable in an increasingly interdependent world.

Colombia and Its Outrageous Paradox

The Alarming Rate of Imprisoned Women for Drug-Related Offenses

Prohibitionists and Gangsters: Two Faces of the Same Coin

Against the War: The Mom Political Camp

War on Drugs, War on Women

States must guarantee the ESCR of refugees and migrants