Even though the price of gold has now reached its lowest level in the last five years, gold price increased steadily between 2000 and 2012. This increase produced a worldwide growth in mining activities, including illegal gold mining, which has become an unleashed monster for human rights.

Even though the price of gold has now reached its lowest level in the last five years, gold price increased steadily between 2000 and 2012. This increase produced a worldwide growth in mining activities, including illegal gold mining, which has become an unleashed monster for human rights.

Even though the price of gold has now reached its lowest level in the last five years, its price increased precipitously between 2000 and 2012. This increase produced a worldwide growth in mining activities, including illegal gold mining, which has become an unleashed monster for human rights.  These illegal mining activities have wreaked havoc on labor rights, health rights, children rights, civil participation rights and rights of ethnic minorities; especially in the Global South where illegal production is concentrated. Nevertheless, neither states nor gold buying companies have adequately responded to these violations.  In fact, this situation concerning human rights is a transgression of the United Nations´ Guiding Principles on Business and Human Rights and of the extralegal state obligations clarified in the Maastricht principles.

As the map below shows, gold production is widespread in the world. China is the leading producer (370 tons), followed by Australia (250) and the United States (230 tons). 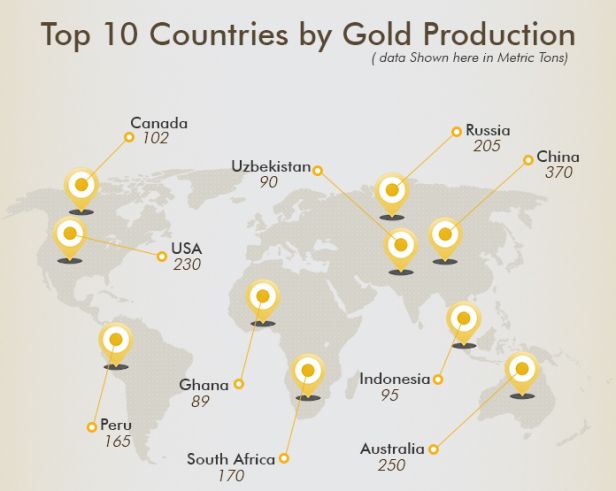 This illegal production has had dramatic effects on human rights in the South. For example, in Colombia, it has increased death rates because it has augmented violence and it has amplified child labor, as illustrated by a recent documentary on a municipality called Segovia in the northwest of the country. In Ghana, it has caused horrible child labor conditions and illnesses caused by mercury (as in many other places).

Like all commodities, someone buys illegally produced gold. Buyer companies and their host states have a responsibility in the human rights mess brought about by this illegal activity.

Who buys it? Most gold buyers are located in the North. As such, the supply chain has to get the commodities to this region, requiring the illegal production to be “cleaned” somewhere. A recent ethnography done by Peruvian journalists shows how illegal gold from Colombia, Bolivia, Ecuador and Peru merges with legal sources in Medellin (Col), La Paz (Bol) and Guayaquil (Ec) then later bought by “companies from the US, Switzerland, Italy and the United Arab Emirates… associated or linked to the London Bullion Market Association (Lbma), the union that sets the international price of gold and that gathers the major traders of this asset in the world.” As earlier referred to here, this is not an exclusively Latin American phenomenon, as some of these companies also operate in Africa.

The link between human rights and companies is an important advocacy area for human rights activists. These companies should comply with the United Nations’ Guiding Principles on Business and Human Rights and if not, their states should make them do so.

The Guiding Principles are based on three pillars: first, states (where the companies are operating or are domiciled in, or which own the companies) should make companies protect human rights; second, companies have to respect human rights; and, finally, companies which violate human rights must provide remedy. There is an even greater need to adhere to this last principle given how the prices of gold are currently going down and some people may think that it is better for market incentives to operate and make illegal gold mining unattractive, move on, and do not remedy. Illegal mining has caused tremendous human rights damages that ought to be repaired.

These principles are reinforced by the extralegal obligations provided for in the Maastricht principles. These principles clarify that states have the obligation to protect rights whenever private individuals, organizations, transnational corporations or other business enterprises are violating these rights in their territory, or when the non-State actor that is violating rights has its parent or controlling company or its main place of business or substantial business activities in the State’s territory.

In short, companies in the US, Switzerland, Italy and the United Arab Emirates are prohibited by international principles from buying illegal gold. Furthermore, their states have the obligation to prohibit these deals that mine human rights in the South.

Legal gold mining has also endangered many human rights in many parts of the world. Nothing in this post should be understood as concealing this fact.

Economy, politics, peace and inequality: What can we learn from Rwanda?

Informal Justice: the conflict resolution formula in areas that the FARC will vacate

After conflict, forgiveness will not be the most important: lessons from Sierra Leone

Blog to the Supporters of “Merit Pays”