Innovative approaches to the drug problem and imprisonment 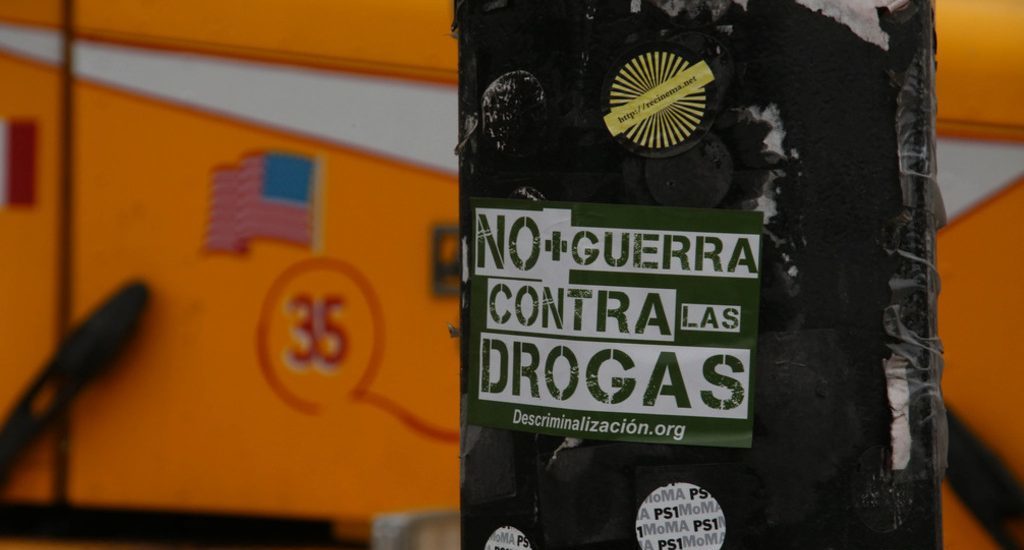 The experiences of Uruguay, Costa Rica and Ecuador show that it is possible and useful to apply innovative approaches to drug-related incarceration. However, they also highlight the limits of these programs and their failure to prevent further criminal activity.

The experiences of Uruguay, Costa Rica and Ecuador show that it is possible and useful to apply innovative approaches to drug-related incarceration. However, they also highlight the limits of these programs and their failure to prevent further criminal activity.

According to the Research Consortium on Drugs and the Law (CEED), there has been a sustained increase in the incarcerated population for drug offenses in Latin America in recent years, an increase that is greater than for other crimes as shown on the graph below: 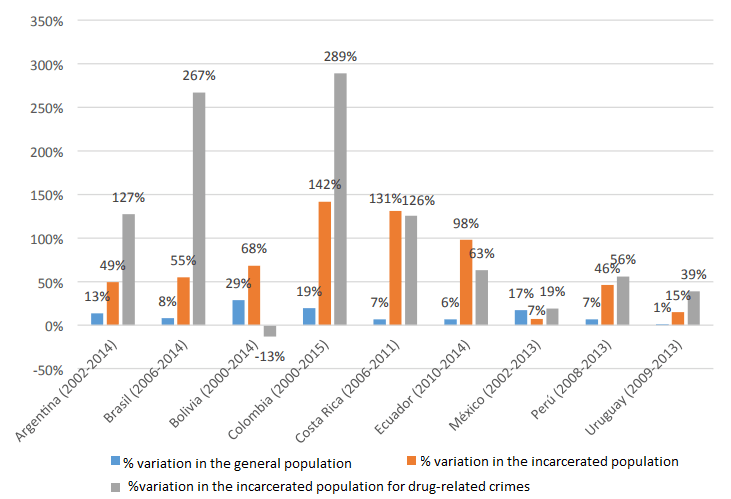 Why has this situation occurred? One of the main causes stems from the punitive populism that has been applied, characterized by the establishment of disproportionately high penalties, the excessive use of preventive detention, and sentences requiring jail time. In short, the imposition of punishment based on the amount of drugs seized without considering the role of the person committing the action. These are policies that take the form of sanctions, failing to work towards the prevention of drug crimes, significantly undermine the drug market, or prevent organized crime from continuing to thrive.

Faced with this situation, it is necessary to look at international experiences that foster an innovative approach to the traditional punitive response to the drug problem. With this goal in mind, WOLA, the International Drug Policy Consortium, the Inter-American Commission of Women of the OAS, and Dejusticia, began the task of collecting these experiences.

In this entry, I will refer to those policies implemented in Uruguay, Costa Rica, and Ecuador, countries that have opted for alternative measures against the traditional punitive response to drug-related crime; measures that seek to reduce the damage caused by prison time on people in vulnerable conditions and who do not hold leadership roles in the drug market. These policies have also taken on the challenge to address inequality and poverty related issues of those who are punished for drug-related crimes, which are predominantly women and young people.

In Uruguay, a number of programs have been promoted, particularly aimed at preventing the commission of drug offenses, providing health care for people with some type of dependency, and advancing the reintegration of those who have been in prisons. These are financed through funds from the Decommissioned Property Fund, the entity responsible for the reception, inventory and administration of assets seized in cases of drug trafficking and money laundering. The programs have been especially targeted at women and trans women who are incarcerated. This photo is part of a WOLA series created to show the human cost of current drug policies in the Americas. Photo credit: WOLA Flckr

According to program evaluations, between 2011 and 2014, in the area of social inclusion, 50% of program participants were working; 72.7% of them, within the formal economy. In terms of drug consumption, 66% of those who participated in the programs no longer consume, 24% consume sporadically, and only 10% consume equal amounts or more than before.

In Costa Rica, the national drug law (Law 8204 of 2001) was amended in 2013 to include greater proportionality and to ensure that the law had a gender focus (article 77bis). This included differentiated criminal treatment (a reduction in prison sentences from 8 to 20 years to a sentence of 3 to 8 years) for women in vulnerable conditions who were authors, or had participated in the crime of introducing drugs to the penitentiary system.

But the change did not stop with legal reform. In 2014, a program called the “Interinstitutional Network” was created, which seeks to “remove vulnerable women from the criminal justice system and refer them to counseling, drug treatment and job training services”, facilitating their access to economic subsidies, scholarships, vocational training and advising on the creation of small businesses. Additionally, it provides support for children care so that women can work and study.

Finally, there is the case of Ecuador. The country had one of the toughest drug laws in Latin America, which had contributed to an increase in overcrowding within the prison and penitentiary system (it reached 157%). In 2008 and in response to this situation, the Constituent Assembly pardoned 2,300 people convicted of minor drug offenses, 30% of whom were women.

However, contradictory regulatory reforms have since been introduced. In 2014 the penal code was amended by introducing more proportional penalties for drug offenses. It created different levels according to the scale of the drug traffic (minimum, medium and high), reduced penalties for minor drug offenses, and distinguished between traffickers and growers, between violent and non-violent crimes, and between traffickers and consumers. One year after the entry into force of the reform, the percentage of women incarcerated for drug offenses dropped to 43%.

Regrettably, in spite of the significant results that the measure achieved in 2014, in 2015 the government promoted an increase in penal sanctions included within the penal code and a reduction of thresholds that define the minimum, medium, high, and large scale of traffic.

These three experiences show on the one hand that it is possible and useful to apply innovative approaches, but they also highlight the limits of these programs. Because they are predominantly seeking to reduce the damages stemming from the increasing prosecution of individuals linked to drug offenses, they fail to create strong prevention programs that allow for action before criminal behavior takes place and that could reduce the conditions of poverty and lack of opportunities. For example, the predominant profile of women who are involved in drug related crimes is well known: poor women with dependents, with low education levels, unemployed, etc. If so, the aim of these policies should be on counteracting the vulnerability faced by large population sectors that are cannon fodder in the drug market.

Where will the 9 million hectares needed for zidres come from?

Where are these so-called monsters born?

The déjà vu of untitled lands: the Constitutional Court can prevent us from returning a century