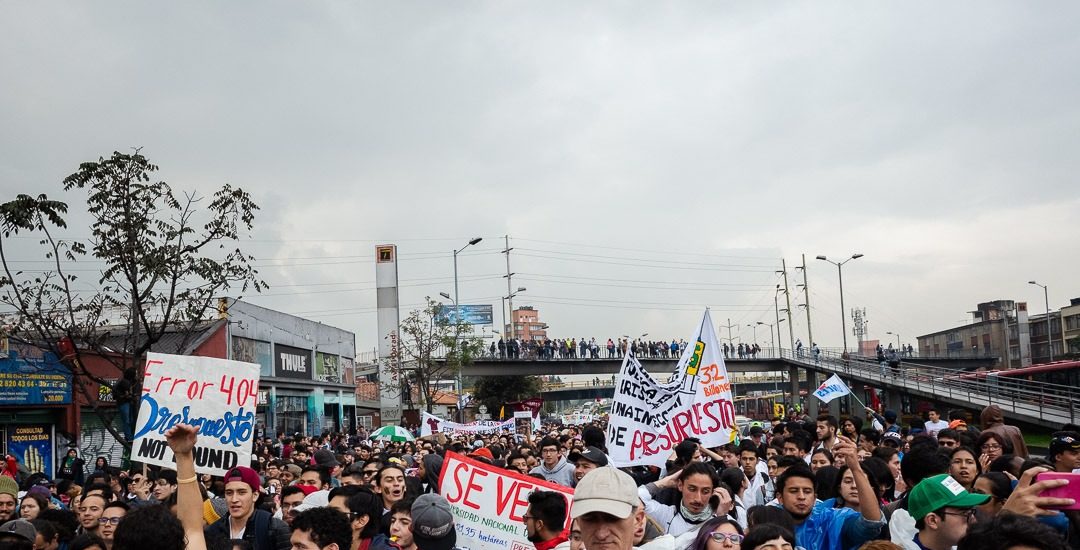 On October 10, students, teachers, and administrators crowded through the gates of la Universidad Nacional de Colombia in Bogotá, Colombia’s premier public university (and among the nation’s top overall institutions of higher education). These were the first steps of a march for public education that would take them through the city to La Plaza de Bolívar, Bogotá’s governmental square. Despite the rain, thousands of students from public, private, and technical institutions alike took to the streets with chants and songs, their counterparts in cities around the country doing the same.

For La Nacional students in Bogotá, this marked the first day of what is now over a month-long strike supported by over 32 universities around Colombia, calling for a solution to the financial crisis facing higher education. Students have continued public marches—by torchlight, in Halloween costumes, with giant pencils, and, in one instance, by dividing lanes of traffic in a haunting, candlelit protest. While students have worked hard to preserve the image of their movement (including cleaning graffiti as they march), several recent protests have resulted in confrontations with police. Concerningly, human rights groups have reported excessive use of force, arbitrary and illegal detentions, and the disappearance of students. 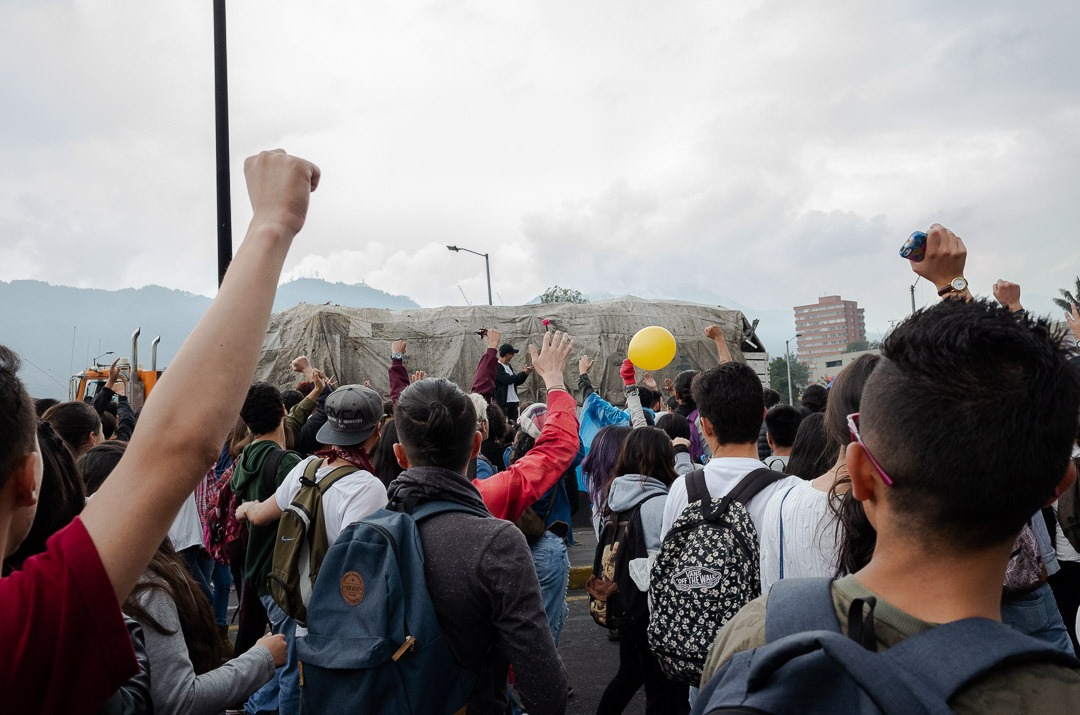 During the October 10 march in Bogotá, students cheer as a passing semi-truck honks its horn in solidarity. Photo by Lucas Paulson.

The government of President Ivan Duque has responded to the student movements by increasing next year’s budget by 500 billion pesos, and promising to seek more funds over the coming years. While this is an expression of political will, many remain concerned that it does not assure sustainability for the system. Many experts attribute the current crisis to Law 30 of 1992, which adjusts funding according to the Consumer Price Index (CPI). While this formula adjusts funding to inflation, it does not account for increasing enrollment (which has grown by 284% in the public sector since 1993), and other unforeseen costs, such as wifi, that have become vital components of educational institutions. Students have had to bear the cost of this inconsistency: in the last four years, tuition costs at la Universidad Nacional have doubled. Some 50,000 students in Colombia are reportedly unable to pay back their student loans.

The pattern is not unique to Colombia. In the past year, Argentina, Chile, and France have all seen major protests concerned with equity and access to higher education. In countries like the United States, funding for public education has been steadily decaying. From 2008 to 2013, states cut funding to public research institutions in the United States by 20%. In a notable case, then-governor of Wisconsin, Scott Walker cut $250 million USD from the University of Wisconsin’s biennial budget. The university was forced to lay off employees and cut research spending and course offerings. Many top researchers left, and the institution fell in rankings.

But so what? The government can’t afford everything, and universities are certainly more of a luxury than a necessity, right?

It would certainly be easier to fall back on such ideas of individualism and resource scarcity—yet these arguments ultimately ignore that budgets are always the result of decisions made by people. This is not abstract economics; defunding public education is a conscious choice by policy makers not to prioritize education. And that choice has consequences.

From 1979 to 2012, the income gap in the United States between a family of two college graduates and a family of two high school graduates grew by $30,000 USD. A US worker with a college degree makes 74% more than a worker with a high school degree. In Colombia, one study estimates that labor returns on education are 23% more for an undergraduate degree, and 53% more for a master’s degree. In OECD countries, those with higher education earn on average 55% more than those without. While education alone will not solve inequality, the role that it plays is crucial. This is, after all, one of the tenets of public education—that the opportunities that come with education should not be available only to those already with the means. 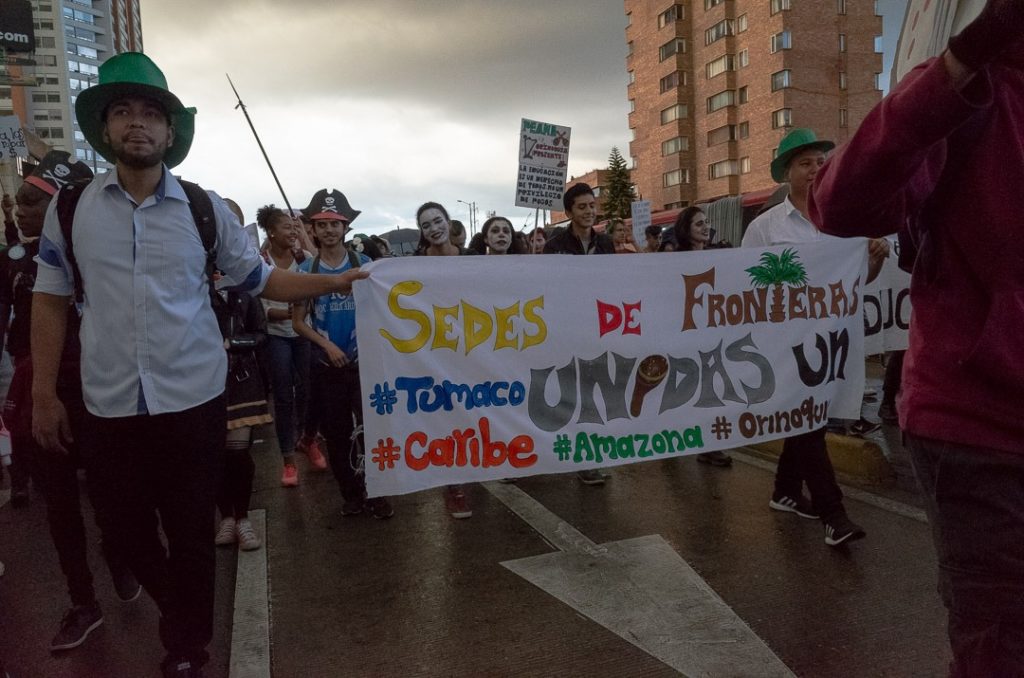 Regional Campuses: La Universidad Nacional in Colombia has four campuses located in more isolated regions of the country, opening access to more students around the country.  Photo by Lucas Paulson.

However, as funding for public education drops, educational institutions are forced to seek funds elsewhere, which usually implies some mix of increasing tuition and privatization—both of which run the risk of deepening inequality.

Moves to privatize education are often based on the idea that market logic will improve educational quality through competition, improve efficiency (i.e. decrease wasteful spending), and increase access. While the growth of private institutions has expanded access to education, research also shows that higher status groups benefit more from deregulation, and that competition and choice do not necessarily improve quality.

Introducing business-model logic to higher education also comes at a cost to the focus of university finances and energy. In the face of decreasing state funding, universities often hire incredibly expensive, business-like administrators to cut spending (at U.C. Berkeley, the number of senior administrators is five times greater than 20 years ago, while faculty positions have hardly increased). Equally concerning is the nationwide shift from tenure-track positions to lecturer positions: in 40 years, the percentage has shifted from 57:43 to 34:66. This means fewer highly desirable positions, which has increased pressure on both professors and graduate students to publish, and risks decreasing graduate school enrollment—meaning less time and fewer bodies dedicated to teaching. Furthermore, as public universities become dependent on external sources of funding (through business partnerships, for example), they risk compromising their role as a public good, in the service of society. 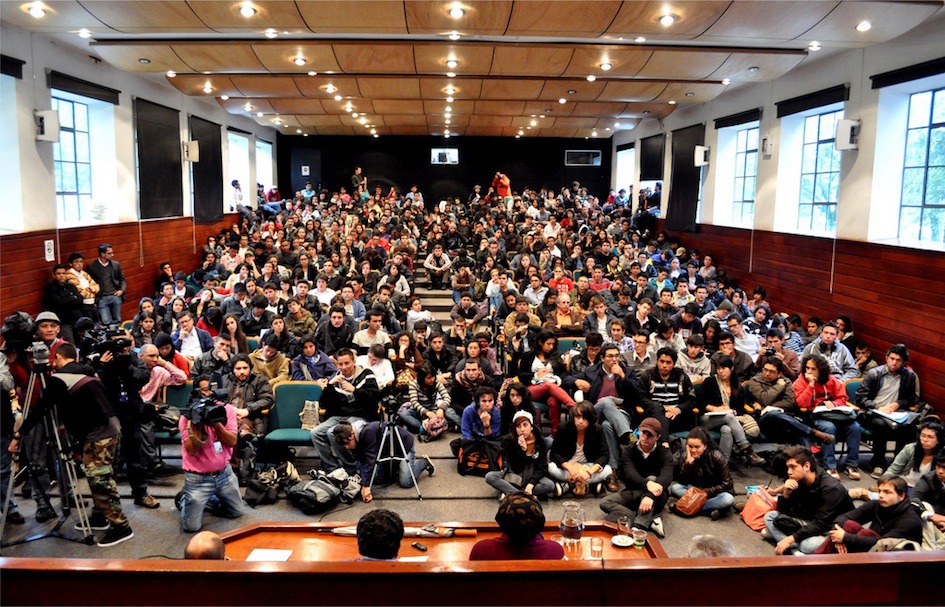 In spite of all of this, solutions are not clear cut. Free, universal education has become the rallying cry for many education advocates. One frequently cited example is Chile: in 2016, following student protests in 2011, Chile introduced a program moving progressively towards tuition-free higher education. While the program is not universal, it does seem to have expanded access to higher education.

A Brookings Institution report suggests, however, that the program seems to have mostly replaced other, more targeted financial aid policies of scholarships and loans (low-income students received between 63-70% of tuition costs in scholarships). The students who benefited the most from the new program were those who previously didn’t meet academic requirements for scholarships, suggesting that increasing access, particularly for low-income students, may have been more efficiently achieved by simply removing merit requirements for scholarships.

More concerning is the unintended consequence of limiting access of the lowest strata of students to competitive universities. As funding becomes more accessible to middle-class families, universities become more selective, thus forcing out those lower-income students with lower test scores. An MIT study suggests that the fully implemented program could lead to a 20% decrease in university enrollment among low-income students. 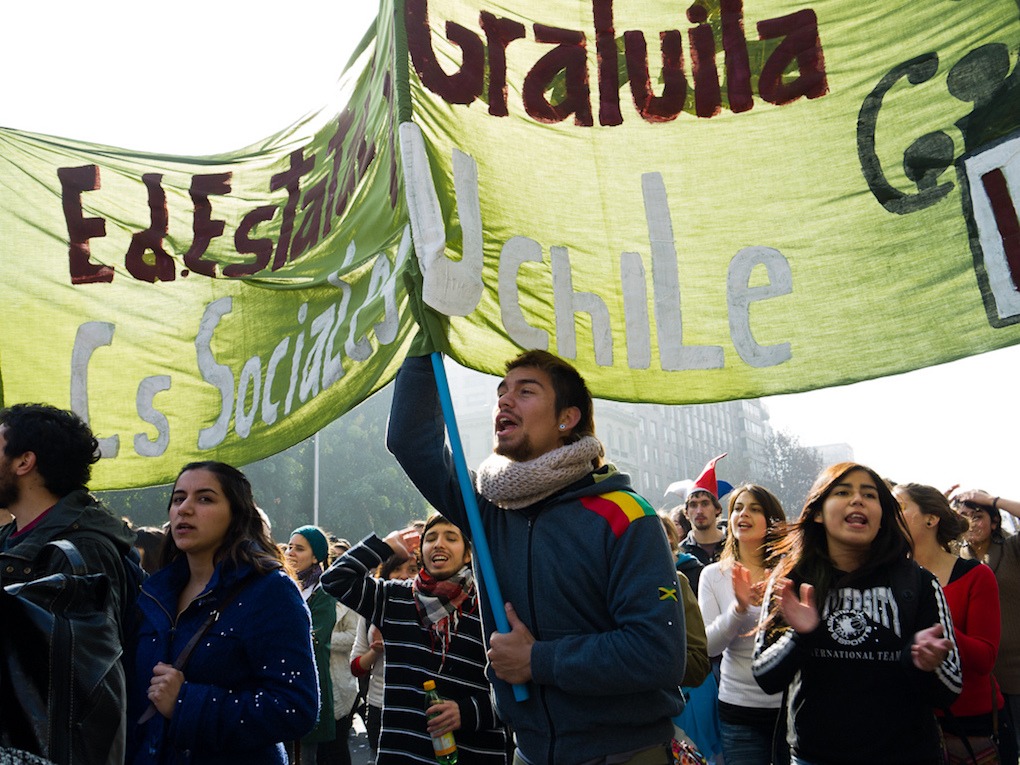 So, free does not always translate to good. Policy specifics matter. Nevertheless, public education is a vitally important institution to society—one certainly worth investing in. While it may be true that the demand for education has grown to a point where it is unsustainable without the private sector, those interests must be managed and controlled in ways that preserve the values of the institution.

This, ultimately, is the reckoning that cutbacks to public education represent. We—in the United States, in Colombia, in France, around the world—are being asked to define the purpose of education. Is it simply to reproduce and reward already vested and privileged interests? Or, is the purpose of education to invest in equity, in accessibility, in enriching our societies and our lives through knowledge and discovery and community? Are we to “wither away” against the challenges of funding, or are we to fight to build systems and controls that sustainably protect and invigorate the values for which public education exists?

In the streets of Bogotá, young voices sing:

Governments, can you hear them?