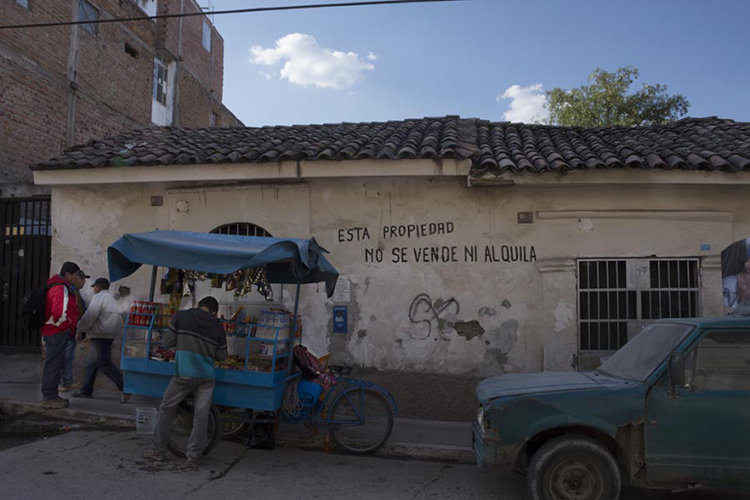 And it meant that the “Not for Sale” signs pointed to something more than the constant potential for theft. They also pointed to the structural problem of land distribution and access to property in the country.

And it meant that the “Not for Sale” signs pointed to something more than the constant potential for theft. They also pointed to the structural problem of land distribution and access to property in the country.

On my first road trip in Colombia outside of Bogotá, many years ago, I remember being surprised at a type of sign that frequently dotted the side of the road. They stated clearly the same message: “NO SE VENDE” (“NOT FOR SALE”), or occasionally, “NO SE VENDE ESTE LOTE” (“THIS LOT IS NOT FOR SALE”). Often they were billboard sized, blaring the fact of not being for sale over the road and the surrounding landscape. Most of them loomed above largely empty plots of scrubland or pasture. I was mystified. I had seen For Sale signs all over the world, For Rent signs, and even For Exchange signs in Cuba when the purchase and sale of homes were still prohibited. But why would someone advertise that a plot was not for sale?

A few questions to friends illuminated the matter. These signs were to avoid theft, they said. Criminals could just come along and sell a plot they didn’t own to a willing buyer, and by the time the real owner figured it out, the criminal would be long gone. This could embroil both the owner and the innocent buyer in legal problems. And such a situation was particularly possible with largely empty rural plots like those I had seen, they said, since owners didn’t live there or, in some cases, even monitor frequently. These conversations revealed an understanding of “Not for Sale” signs essentially as crime prevention strategies.

Over time, however, I came to understand that these “Not for Sale” signs also pointed to something deeper and more structural about access to property in Colombia. The signs occasionally appeared in urban centers – I even saw one recently on a dilapidated historic building on one of the main avenues in Bogotá – but were much more common in rural areas. In the rural areas where I work, many of them appeared on empty plots that were owned by large landholders or corporations. They were rarely, if ever, in active use. In a country in which the Gini coefficient for land in 2009 was .863 – where 1 is defined as perfect inequality, this coefficient indicates an extremely unequal distribution of land – the fact that there would be large landholders sitting on empty plots is unsurprising. And it meant that the “Not for Sale” signs pointed to something more than the constant potential for theft. They also pointed to the structural problem of land distribution and access to property in the country, where empty plots in fertile areas could lie fallow and serve a largely speculative function, even as the numbers of landless in Colombia remained high. A colleague related to me a play on the “Not for Sale” theme that speaks to this relationship: “No Se Vende, Se Engorda” (“Not for Sale – For Fattening”), referring to the fattening of the wallet that comes with land speculation.

This past week, The New York Times published an investigation about real estate shell companies that have performed fraudulent deed transfers on New York City homes. Like the imagined potential thieves of “Not for Sale” lots in Colombia, these companies were designed to sell properties that did not belong to them to third parties, pocketing the profit and leaving owners high and dry. Some of the cases reviewed by The Times actually involved owners who had willingly sold their homes to these companies, with a promise that the companies would provide owners full relief from their mortgages. These promises never came through, and many owners found themselves both homeless and still in debt to their lenders. The shell companies often specifically targeted owners who were behind on their mortgages, using their financial vulnerability to trick them into signing over the deeds to their homes.

Like in Colombia, this phenomenon does not just point to the existence of a particular kind of criminal practice, but also to more structural issues of property in New York City, and the United States more broadly. Most importantly, it speaks to the troubled relationship between property and debt.

The 2008 financial crisis led to the collapse of the housing bubble, followed by a massive and ongoing wave of foreclosures. Nearly five million homes were subject to foreclosure in the ensuing eight years. While some of this problem was concentrated in subprime loans to homeowners (understood as more risky loans), a study from the National Bureau of Economic Research (NBER) demonstrated that 656,003 more prime than subprime borrowers were subject to foreclosure between 2009 and 2012. This study identified the primary factor in foreclosure outcomes as “negative equity,” which is the debt that occurs when the market value of a home falls below the outstanding amount of a homeowner’s mortgage.

This means that the problem underlying foreclosures was not simply risky lending practices, but a more basic, structural relationship between debt and homeownership that landed millions of U.S. homeowners in deep financial trouble. This relationship between debt and homeownership created the conditions of possibility for the criminal practices described in the Times’ investigation. A 2014 report on the problem is more explicit about the underlying debt conditions that made these practices possible, calling the deed transfers “foreclosure rescue scams.”

It is easy to read the fraudulent deed transfer problems in both Colombia and the U.S. as a question of criminality, to which the solution is “Not for Sale” signs, or public education about real estate scams. But the very existence of these scams points to their conditions of possibility: structural problems of access to property, be it due to distribution or to debt. It will take more than a “Not for Sale” sign to solve that.

Repairing Victims: Lessons Learned from a Study on Return