Not Pretty in Pink: The Undisclosed Fashions of Farmed Salmon

People often choose cuts with bright pink to reddish hues, under the impression that these are fresher, tastier, and of better quality, thus warranting premium prices. The reality, however, is that “color does not affect these characteristics” and, in the case of farmed salmon, this color is actually manufactured.

People often choose cuts with bright pink to reddish hues, under the impression that these are fresher, tastier, and of better quality, thus warranting premium prices. The reality, however, is that “color does not affect these characteristics” and, in the case of farmed salmon, this color is actually manufactured.

Choosing seafood on a restaurant menu used to be so easy for me: the first thing to invariably catch my eye would be salmon—either freshly baked, with its signature pink peeking under perfectly melted cheese, or smoked and sprinkled with chopped dill. And it seems many others love it, too.

Demand for salmon has been rising because many consumers see it as healthy and tasty. With more doctors advocating diets composed mostly of fish and vegetables, and people consciously shifting their food choices to healthier, more ethical, and/or environmentally sustainable options, fish has become a more crucial source of protein, and salmon has been a top choice. Also, salmon is considered a high-end product in many societies: in China, for example, eating fresh salmon has become a status symbol. Thus, despite—or perhaps because of—its high price vis-à-vis other fish, the growing middle class and their increasing purchasing power have made salmon more popular and fashionable, driving up demand for it. In 2017, Chile’s Los Lagos region, China’s largest source of Atlantic salmon, saw a 73.9% rise in exports to China.

But when I learned how salmon usually gets from sea to table, it made me squeamish and wonder: how much do other salmon lovers really know about it? Are we adequately informed about our food choices?

When buying salmon in supermarkets, people often choose cuts with bright pink to reddish hues, under the impression that these are fresher, tastier, and of better quality, thus warranting premium prices. The reality, however, is that “color does not affect these characteristics” and, in the case of farmed salmon, this color is actually manufactured. Very precisely manufactured, in fact, as it is the result of a deliberate intent to produce an exact level of reddish-pink that feed producers have found to trigger the consumer’s decision to purchase. Until recently, however, few consumers knew that the fish they were eating had been fed synthetic chemical colorants produced from petrochemicals, although these artificial colors were actually the prime motivation to buy them. 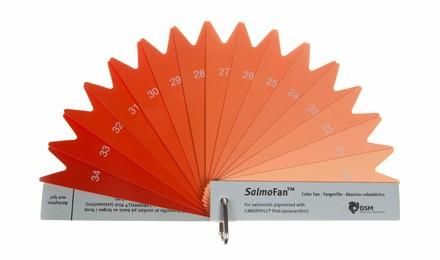 The SalmoFan, a color fan that allows salmon farmers to select the exact shade of pink in their salmon’s flesh (DSM).

According to World Wildlife Fund (WWF), salmon aquaculture—or farming salmon in pens—is the world’s fastest growing food production system, currently accounting for 70% of the market. Farmed salmon has overtaken wild-caught salmon, which can be twice or thrice as expensive. Thus, most of the salmon sold in supermarkets is farmed, and most of that is artificially colored based on a color fan called SalmoFan, which contains different shades of pink for salmon farmers to choose from, to dictate the precise color of the fish they breed. This, because salmon farmers know that consumers buy salmon that are a certain level of pink (33-34 on the SalmoFan). Research by the creator of the SalmoFan revealed that consumers will pay up to US$2.20 per kilogram more for redder salmon. To achieve the correct color, as early as 1989, feed companies have been adding synthetic colorants to salmon feed. Otherwise, farm-bred salmon would have unappealing gray flesh. 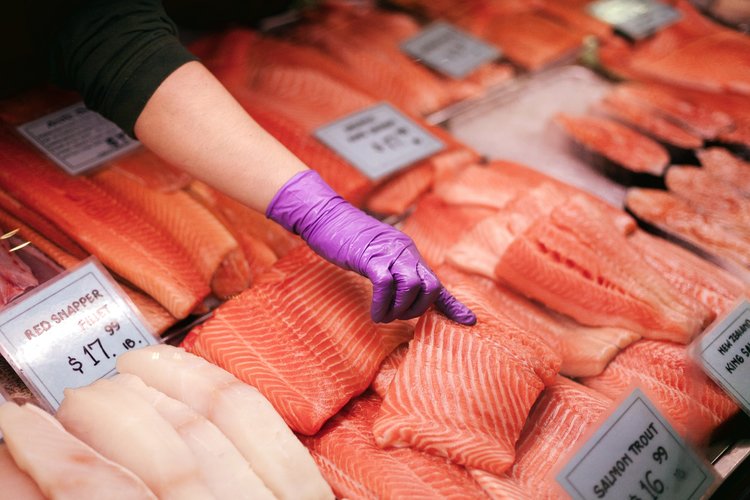 Wild salmon, on the other hand, get their naturally pink flesh from astaxanthin, a carotenoid found in their diet, which includes plankton, krill, small crustaceans, and fish that themselves previously ate crustaceans. (This is the same carotenoid that makes flamingoes pink, from the shrimp they eat.) Wild salmon are born in rivers, where clean and highly oxygenated water help them survive. They then move to sea as they mature and, when ready to spawn, most of them jump upriver, returning to the exact stream where they were born. They rely on the earth’s magnetic field to guide them through the ocean and on their keen sense of smell to go back to their natal streams. During these journeys, which can last hundreds of kilometers, the salmon’s body undergoes numerous changes, influencing its fat and nutrient content. Farmed salmon do not undergo any of these, as they live all their lives in stationary pens in the sea, eating kibble made of “oil and flesh of smaller fish (e.g. herring and anchovies), corn gluten, ground-up feathers, soybeans, chicken fat, [and] genetically engineered yeast”—food that would mostly be absent from salmon’s natural diet.

All these make farmed salmon (although still safe to eat) nutritionally inferior to wild salmon, and mislabeling or a failure to disclose (1) its origins and/or (2) the addition of synthetic colorants violates consumers’ right to be properly informed about their food choices.

Food Labels: the Right to be adequately informed

Wild and farmed salmon look very similar, and it is extremely difficult for an average consumer to differentiate them by visual inspection. Thus, food labeling regulations play a crucial role in safeguarding consumer rights. At the very least, they allow consumers to make informed decisions about whether or not they wish to eat farmed and/or artificially colored food.

The Codex Alimentarius, which sets very basic food production and food safety standards, prohibits prepackaged food from being described on any label “in a manner that is false, misleading or deceptive or is likely to create an erroneous impression regarding its character in any respect (§3 General Principles)”. However, Oceana, an organization working to protect global oceans, found that in the US, about 43% of farmed Atlantic salmon had been mislabeled as wild. Alarmingly, US food labeling regulations are already more advanced than in the Global South.

The issue on information about our food takes different forms, depending on where consumers live and where their salmon comes from: (1) whether or not labeling regulations exist in their and the supplier countries, (2) if they do, whether or not suppliers (foreign and local) comply with them and, if not, whether or not they are sufficiently policed, (3) in the absence of regulations, whether there are other (e.g., voluntary) means by which consumers are informed adequately about their food. In the US, for example, labeling regulations do exist, but their existence has not provided adequate safeguards; many consumers still do not know the origins of the salmon they eat, or that their colors are artificial, or both. In much of the Global South, which has driven the increasing demand for salmon, regulations either do not exist at all or are not implemented fully, resulting in the same information inadequacy.

This has numerous knock-on effects because, in addition to inferior nutrition from farmed salmon, questions remain about the safety of synthetic colorants (particularly the cheaper canthaxanthin), and salmon farming itself has multiple adverse environmental impacts. For example, mass infestations of sea lice in farmed salmon have put wild salmon species at risk, especially when lice escape and infest wild salmon swimming nearby as they migrate between seawater and freshwater to breed, sometimes killing them. Further, the chemicals and pesticides used to contain these lice pollute the marine environment, killing fish and other marine animals. 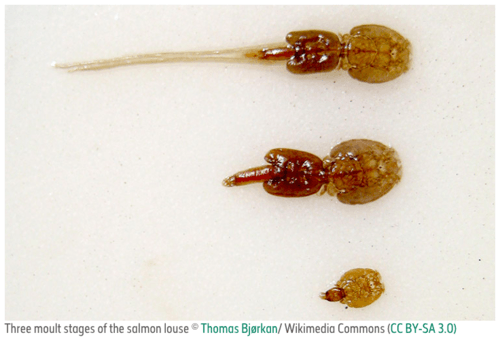 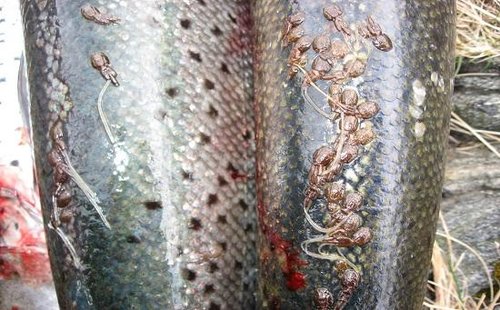 Additionally, on numerous documented occasions, farmed salmon have escaped into the ocean, potentially interbreeding with wild salmon and weakening the latter’s genes.

Yet, the solution is not as easy as switching from farmed to wild salmon. Many commercial fisheries practice unsustainable methods that result in large amounts of by-catch, unnecessarily killing numerous species for the select few they want, and regularly lose nets that last up to 600 years, resulting in ghost fishing. One solution is to choose salmon certified as sustainably caught, like those bearing the Marine Stewardship Council seal. For farmed fish, look for Aquaculture Stewardship Council or Best Aquaculture Practices certifications.

Ultimately, as consumers, we need to be more conscious about where our food comes from, and demand to know what it underwent before reaching our plates. While advocating for food producers to adopt voluntary standards is certainly one way to defend our right to be adequately informed, demanding strict (and strictly enforced) regulations is a more impactful way of correcting imbalances between what we should know and what we actually know about the food we eat.