Protecting the rights of peasants and rural workers implies the protection of the fundamental rights guaranteed to the rest of the population, including those in urban areas, given the impact that food production has on the rights to health and a healthy environment.

Protecting the rights of peasants and rural workers implies the protection of the fundamental rights guaranteed to the rest of the population, including those in urban areas, given the impact that food production has on the rights to health and a healthy environment.

On the first day of class, Martha, my fifth-grade teacher, asked who the most important person in society was. We listed the president, firefighters, people who build houses and highways—we even named Martha, but none of us were right. “It’s the rural farmers, because without them, we wouldn’t have anything to eat,” she answered. I returned home that day very confused. My grandma, herself a rural farmer, a campesina who lived in the Andean mountains of Nariño (Colombia), was always reminding me that I had to study and work hard to have a good life in the city, so that I wouldn’t have to live in the country. She would tell me that the countryside was full of a lot of need and a lot of poverty. At nine years old, I didn’t understand how Ms. Martha could say that campesinos were the most important people, yet at the same time they could have such difficult lives. Why were the most important people those who were receiving the least in society?

According to the World Bank, there are more than 3.4 billion people living in rural regions, upon which some 70% of the human population depends for food (Image 1). Yet in a cruel twist, 80% of the rural population suffers from hunger and poverty. Inequality in access to land, climate change that increases the risks associated with natural disasters, and other challenges confront this population when they seek a better standard of living. This, as well as being subjected to forced displacement and marginalization are a part of the reason why many rural peasants can no longer earn a living from the land upon which they work, forcing them to migrate cities in search of opportunities. 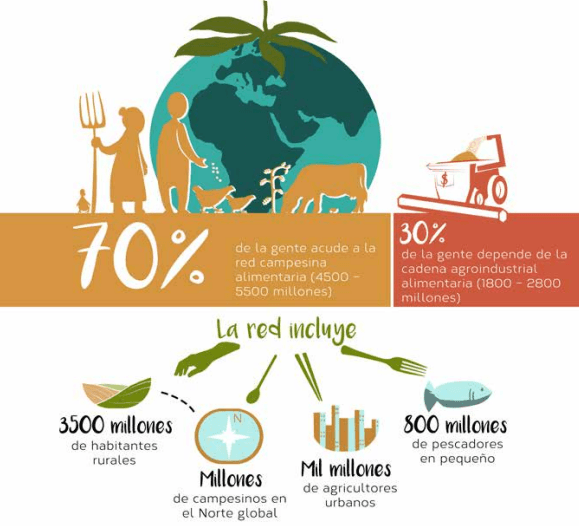 In spite of the fact that the UN, via its 2030 Agenda, the World Food Organization, and the past three rapporteurs on the right to food (Ziegler, De Shutter y Elver) have highlighted the need for a paradigm shift in the global food system and a revitalization in the role of rural populations, these pronouncements have not had much impact. There remains an enormous gap in the international framework of human rights for making such rights a reality.

Nevertheless, the final week of September of this year was a historic one, which reflected more than 17 years of long and arduous negotiations by campesino movements. Thousands of people from around the world came together through public demonstrations and social media with a single voice, calling for #DerechosCampesinosYA, or #PeasantsRightsNOW in English (Image 2). The demonstrations sought to call the attention of the UN Human Rights Council, which is currently holding its 39th session in Geneva (Switzerland) and was on the verge of deciding if it would support the declaration on rural and peasants’ rights. Their voices were heard, and on September 28, the Human Rights Council, with 33 votes in favor, 11 abstentions, and 3 votes against*, voted in support of the declaration.

This vote signifies that rural and peasant populations are one step closer to having their rights recognized and protected. The final vote will be held in November in the General Assembly of the UN in New York. While many states have been skeptical of supporting the declaration, rural advocacy organizations believe they will be able to secure the necessary votes. 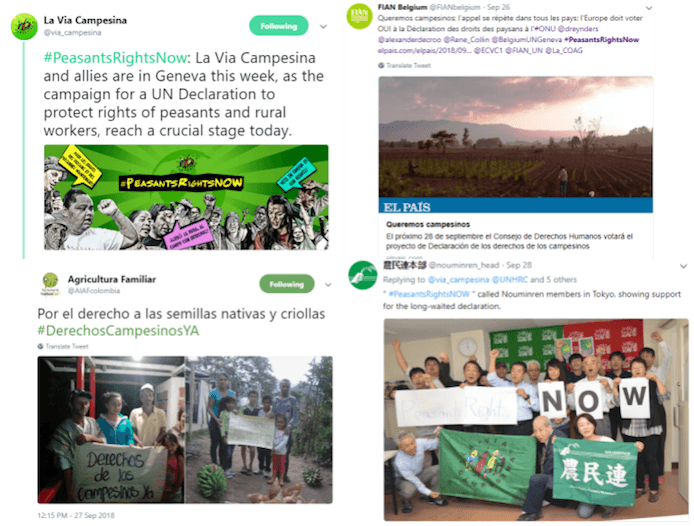 How did the declaration on peasants rights arise?

The Declaration on the Rights of Peasants and Other People Working in Rural Areas has been led by rural social movements and organizations since the 1990s, such as La Vía Campesina, FIAN International, Centre Europe – Tiers Monde (CETIM), among others. After years of international compromises and consultations, these groups completed the text of the declaration, and in 2008, presented it for the first time for consideration by the UN.

“It has been a long and hard process, but as rural workers, as people who have seen the most bitter face of poverty and indifference, we are resistant and will never allow our arm to be twisted,” said Elizabeth Mpofu, general coordinator of La Vía Campesina after learning the results of the September 28 vote. The UN adopting the declaration will require the most important, and not necessarily the easiest component: that governments ratify their promise to peasants and rural workers, including a process of implementing public policies that effectively recognize and guarantee enjoyment of these rights. 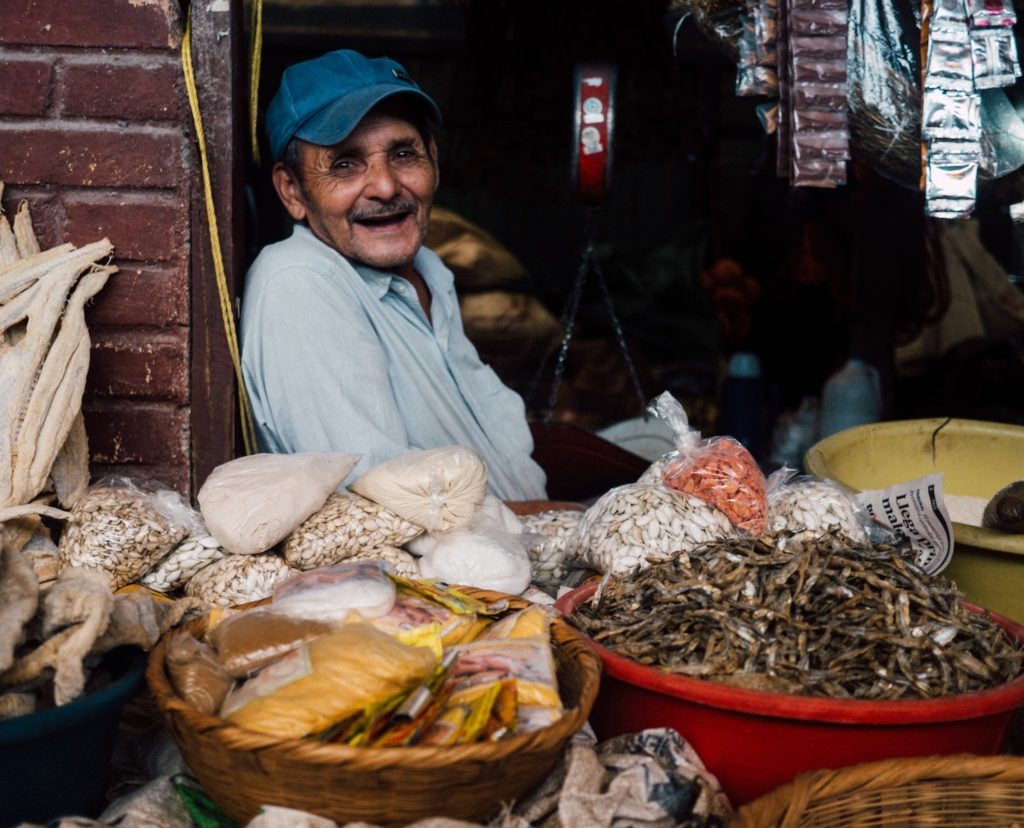 The draft of the declaration that will be voted upon by the General Assembly contains 28 articles, which are organized by six fundamental concepts: i) the right to an adequate standard of living, ii) the right to food sovereignty, the fight against climate change, and the conservation of biodiversity, iii) the adoption of structural agrarian reforms and protection against land grabbing, iv) the right of peasants and rural workers to conserve, use, exchange and/or sell their own seeds, v) the right to receive a suitable payment for their crops and labor, and vi) the collective right to contribute to social justice, free from any kind of discrimination.

It is important to emphasize that protecting the rights of peasants and rural workers implies the protection of the fundamental rights guaranteed to the rest of the population, including those in urban areas, given the impact that food production has on the rights to health and a healthy environment. According to the 2030 Agenda for Sustainable Development, the world population will reach 9 billion people by 2050, which would require almost three planets to produce the natural resources needed to maintain current lifestyles. How, then, can we sustainably provide food for current generations, without affecting the resources of future generations?

A growing body of researchers and activists in food justice suggest that it is possible to create a more sustainable food system through small-scale agriculture with an agro-ecological approach, as its use of of agrochemicals is significantly lower, it protects biodiversity and ecosystems, and guarantees the sustainable use of arable land for food production in the long term. In fact, crop efficiency of smaller scale farms can be up to 79% greater than the agroindustrial model. In spite of all this, however, the lives of peasants and rural workers remain extremely precarious within the current food system, which fails to recognize them.

After many years, with a head full of more questions than answers, I am now certain that my teacher Martha was telling the truth—and so was my grandmother. The people who we have to thank for the food we eat every day find themselves in situations of extreme food insecurity, and in many cases without access to basic services like water, health, and education. I celebrate this declaration, which is one step closer to assuring that the most important people in our society are heard and embraced. I hope that sooner, rather than later, we can truly have #PeasantsRights.

Against: United Kingdom, Hungary, and Austria

What do we mean by freedom of food choice?: The link between nutrition labeling and human rights

Fisherfolk file a tutela to save Santa Marta’s Ciénaga Grande