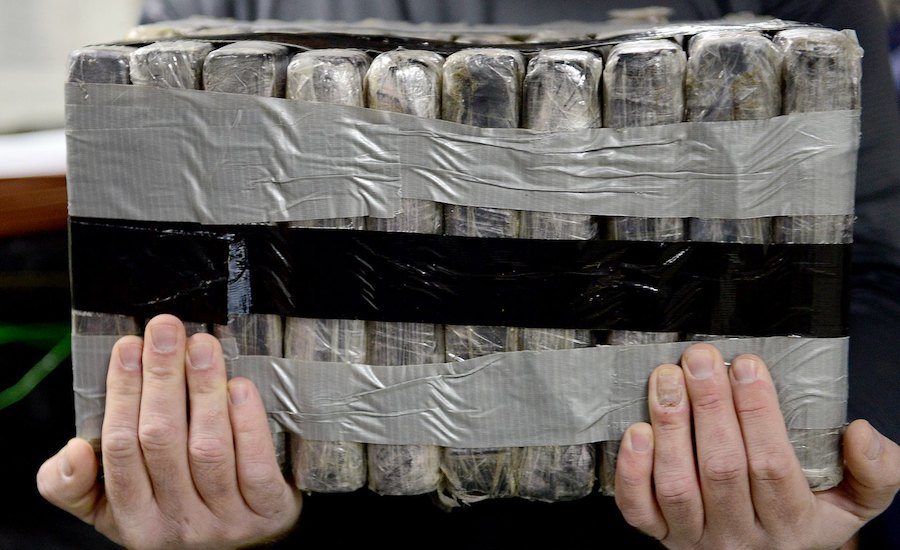 The harshest sentences are served by transporters who, in most cases, are dispensable actors in the value chain of narco-trafficking, and who are committing the crimes because of the marginalized and impoverished conditions in which they live.

The harshest sentences are served by transporters who, in most cases, are dispensable actors in the value chain of narco-trafficking, and who are committing the crimes because of the marginalized and impoverished conditions in which they live.

Nearly one year ago, an event shook up public opinion in Colombia. A “narco bus,” as it was called by the Attorney General’s Office, crashed in Ecuador, leaving 23 people dead and nearly half a ton of marijuana confiscated. Days later, it was reported that members of the organization that operated the bus had been captured. The Attorney General’s Office declared that the bus was run by a group working in Colombia that tricked people into buying cheap, sometimes even free, tourist packages to cover up a narco-trafficking operation that transported marijuana from Colombia to Chile.

This column explains both the drug trafficking sentences in the region that apply to the crashed bus, as well as how the amount of drugs confiscated, which is the only criteria for determining prison time, inadequately addresses the complexities of narco-trafficking crimes.

First, let’s begin with the trip. The bus left Cali, Colombia, crossed the border somewhere into Ecuador, and crashed in the municipality of Pifo, which is located along the Panamerican Highway near Quito. From there, it would have continued south to Peru, and eventually to Chile. In all, the narco bus would have travelled 3795 kilometers across four countries: Colombia, Ecuador, Peru, and Chile.

In Colombia, drug trafficking carries three different sentences: the most serious, which involves more than 10 kg of marijuana, 2 kg of cocaine, or 60 grams of poppy-based drugs, is 10 to 30 years. However, when the person is captured with more than 1000 kg of marijuana, 5 kg of cocaine, or 2 kg of poppy-based drugs, the sentence is 23-30 years. In Ecuador, sentences also vary by the quantity of drugs. The largest scale is also 10 kg for marijuana or 2 kg for cocaine, and the maximum sentence is 10-13 years. In Peru, drug trafficking carries a sentence of 8-15 years, though when the quantity is less than 200 g of marijuana or 25 g of cocaine, the sentence is reduced to 2-8 years. Finally, in Chile the act of transporting drugs or materials used to produce them has a sentence of 5-15 years. Like Peru, having a smaller quantity of drugs can soften the penalty, though in this case the length of the sentence is left to the discretion of the judge, and can be anywhere from 541 days to five years. 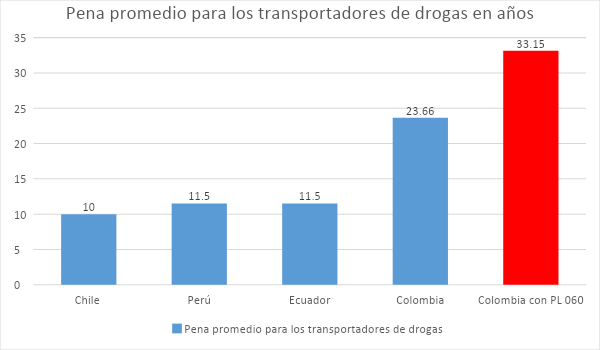 These graphics show that along the narco bus’s route, the highest sentences would have been in Colombia. Likewise, Colombia is the only State that doubles the minimum sentence when the crime exceeds a certain amount of narcotics in relation to a typical crime. This increase is made differentially for each substance without any kind of justification. In practice, this allows for the law, supposedly designed to punish people who traffic large quantities, to be equally applied to people attempting to carry medium quantities of cocaine or heroin on their person out of the country.

Because of the nature of transport in large-capacity vehicles, it is very likely that all such traffickers caught in Colombia will receive an average sentence of up to 24 years—provided that the law written by the Attorney General to raise the average sentence to 33.15 years in prison (the red bar in the graph) doesn’t pass. This would be higher than the maximum sentences for homicide and manslaughter in all of the countries of Pacific South America.

The quantity of drugs, however, is used in different ways to assign sentences in each of these four countries. In Ecuador and Colombia, the greater the quantity of drugs, the greater the sentence, while in Peru and Chile, if the quantity is below a certain threshold, the sentence decreases. In any case, the quantity serves the same purpose: to determine the severity of the crime and of the corresponding punishment. This ignores other factors that should be important in determining sentences, such as as: degree of participation in criminal organizations, reasons for committing the crime, possible effects the drugs could have on public health, among others. Finally, this means that the harshest sentences are served by transporters who, in most cases, are dispensable actors in the value chain of narco-trafficking, and who are committing the crimes because of the marginalized and impoverished conditions in which they live.

This situation deserves special attention and should be the topic of legislative debates in the region, given that drug transporters, as with commercial products, are not the owners of the product and don’t receive a percentage of earnings for the quantity of narcotics delivered, just as transporters of beans, potatoes, corn, soda, or beer are not compensated in proportion to the quantity of their cargo. They are simply contracted to perform a service, in this case, one that could cost a decade or two of freedom, depending on the country in which they are caught. Therefore, future reforms must be aimed at reducing and not increasing sentences for marginal actors in the narco-trafficking chain. This would be one form of mitigating the damage of the war on drugs that has largely been a war on people.