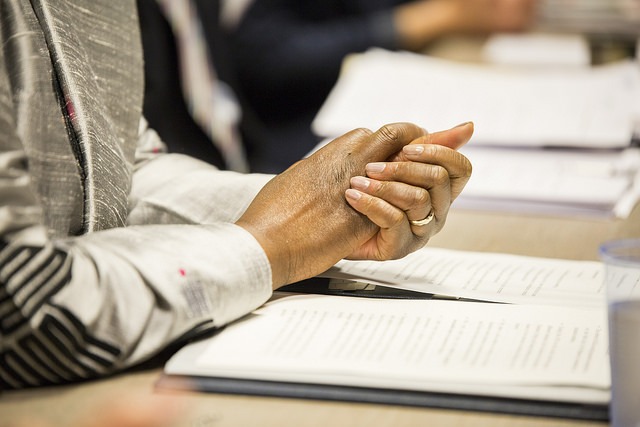 | Coalition for the ICC

With the rise of right-wing presidents in Latin America, measures like the referral can be abused by such governments to advance their political agendas in the region, thereby delegitimizing the crucial cause of seeking justice for victims in Venezuela as a common goal.

With the rise of right-wing presidents in Latin America, measures like the referral can be abused by such governments to advance their political agendas in the region, thereby delegitimizing the crucial cause of seeking justice for victims in Venezuela as a common goal.

“Political events like that of today honor the memory of the murdered and restore the hope of justice for the tortured, the political prisoners and their families, the forcibly exiled and all the Venezuelans who suffer, who go hungry, who are forced to search for food in the garbage, who lack access to medicine…” These were the words uttered by the Secretary General of the Organization of American States (OAS), Luis Almagro, when six countries (Argentina, Colombia, Chile, Paraguay, Peru, and Canada) sent a referral to the Prosecutor of the International Criminal Court (ICC) on 27 September 2018 urging her to open an investigation in Venezuela. Similar to the sentiment expressed by Almagro, the international community also reacted with excited approval. Media sources from across the globe repeatedly highlighted the historical significance of this referral – this was the first time States Parties to the Rome Statute referred a situation to the Prosecutor concerning a situation in the territory of another State Party.

But, amidst the discourse concerning the novelty of the referral, a greater momentous occasion was missed by most. The referral, which involved five Latin American countries, marks a momentous shift in Latin American regional politics and diplomacy. Indeed, Mr. Almagro was correct to call this move a “political event.” Breaking from the regional norm of the principle of nonintervention and the unspoken culture of fraternity among countries, these five Latin American countries have opened the door for a new wave of visceral politics in the region. With the rise of right-wing presidents in Latin America, measures like the referral can be abused by such governments to advance their political agendas in the region, thereby delegitimizing the crucial cause of seeking justice for victims in Venezuela as a common goal. As such, the Prosecutor of the ICC should keep these regional concerns in mind before she decides to open an investigation in Venezuela.

The Referral: A Legally Indisputable Opportunity to Investigate Grave Crimes in Venezuela

The referral appeared to be motivated as a response to a 29 May 2018 report by the OAS regarding the purported crimes against humanity committed in Venezuela. In a set of recommendations issued by the report, the independent experts appointed by the OAS and who wrote the report recommended that Almagro invite States Parties to the Rome Statute to refer the situation in Venezuela to the ICC for alleged crimes against humanity committed since at least 2014. To date, the Venezuelan government has not publicly reacted to the referral itself, but has instead focused on insulting countries like France and Costa Rica, who have subsequently supported the referral. However, on 2 October 2018, the National Assembly of Venezuela, the government organ that once held legislative power until the Maduro government controversially reassigned power to the Constituent National Assembly, approved an accord which supported the referral of the situation in Venezuela to the ICC. 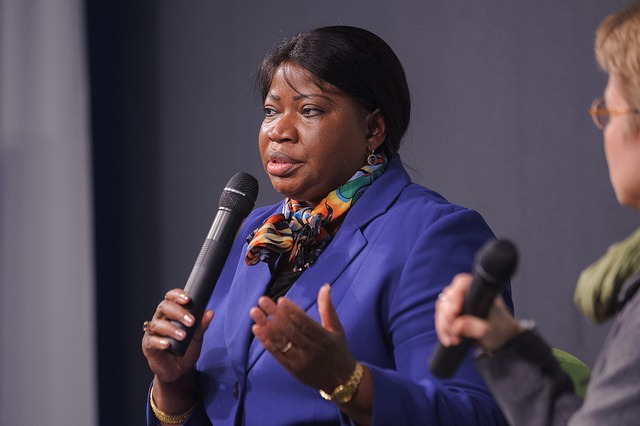 As a result of the referral, the legal character of the ICC’s preliminary examination, which the Prosecutor opened on 8 February 2018, remains unchanged. In other words, the referral does not automatically result in the opening of a full-blown investigation. However, an Article 14 referral does eliminate the requirement that the Prosecutor receive judicial approval before proceeding to open an investigation, thus giving her the sole discretion in deciding whether to open an investigation in Venezuela.

With this in mind, it is necessary to present some of the legal challenges that have been discussed concerning head of state immunity and the problems presented if Venezuela were to withdraw from the Rome Statute, a situation which Venezuela has not yet expressed, but may occur, especially considering Venezuela´s 25 April 2018 decision to withdraw from the OAS.

With regard to head of state immunity, the concerns that an indictment of President Maduro would cause the same problems as did the indictment of President Omar Al-Bashir in the ICC’s situation in Sudan are unfounded. In its decision on South Africa’s noncompliance, the ICC emphasized that “[b]y ratifying the Statute, States Parties have in fact accepted the irrelevance of immunities based on official capacity, including those that they may otherwise possess under international law.” Unlike Sudan, which is not a State Party to the Rome Statute, Venezuela has ratified the Rome Statute, and has therefore surrendered any claim to immunity before the ICC.

Having dispelled these legal concerns, it is important to emphasize that the significant challenges for the ICC would be practical rather than legal (e.g. the difficulty of gaining custody of the accused).

Unlike the legal implications of the ICC referral, the political ramifications of the event are much more difficult to determine. In particular, the referral implicates a tension with the principle of nonintervention, which has always been central in Latin American politics. Indeed, the concept of nonintervention is enshrined in the Charter of the Organization of American States, which says, in Article 19, “No State or group of States has the right to intervene, directly or indirectly, for any reason whatever, in the internal or external affairs of any other State.” Thus, the referral marks a decidedly dramatic shift from the regional norms of fraternity and nonintervention that have characterized Latin American politics up until this point.

When asked about the referral, the Vice-chancellor of Peru, Hugo De Zela, responded that the decision marks a point of “no return.” While the fact that Latin American countries have indeed turned on one of their own is clear, the reasons and motivations for this shift are complex and many.

On the surface, the referral can be seen as a natural response by OAS member states to the OAS report. In the report, the independent experts urged the Secretary General of the OAS to invite member states who are States Parties to the Rome Statute to “refer the situation of Venezuela to the Office of the Prosecutor of the ICC and to call for the opening of an investigation into the crimes against humanity.” In fact, during the period of time between the OAS report and the referral to the ICC, media sources reported a coalition of OAS member states mounting a plan to refer the situation in Venezuela to the ICC. 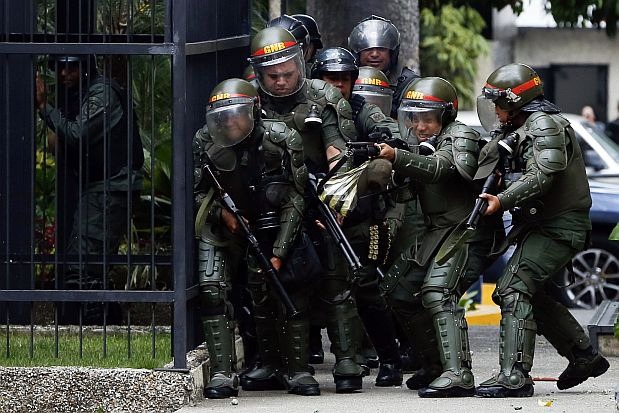 The referral may also have been partly motivated by the massive influx of Venezuelan migrants and refugees settling in neighboring Latin American countries. The UNHCR estimates that over 1.5 million Venezuelans have left their country since 2014, and thousands more are leaving Venezuela on a daily basis. Neighboring countries in the region such as Colombia, Peru, and Ecuador have been absorbing the exponentially increasing number of Venezuelans fleeing their country, but this has come at a high cost. For example, according to official data from the UNHCR, more than 330,000 Venezuelans have entered Peru and more than 870,000 have fled into Colombia.

Although countries like Colombia and Peru have taken actions to respond to those fleeing Venezuela, this massive population has taken an economic as well as cultural toll on the host countries. President Vizcarra of Peru told the UN General Assembly in September 2018 that “The magnitude of this exodus is unprecedented in our region…It demands collective action by the international community.” Perhaps countries in the Latin American region, weighed down by the amassing Venezuelan exodus, hoped the referral to the ICC would help to curb this influx, or at least would condemn its structural causes.

Another significant factor in analyzing the ICC referral is the onset of a wave of tumultuous politics in Latin America. The rise of right-wing governments in the region has mounted tensions among Latin American nations, especially through the use of polarized discourse on foreign policy. Since the election of Mauricio Macri as President of Argentina in 2015, a new era of right-wing governments has taken root in some of the most powerful countries throughout Latin America, such as the recent 2018 elections of President Iván Duque of Colombia, President Sebastián Piñera of Chile, and President Mario Abdo Benítez of Paraguay. With the recent presidential victory in Brazil of far-right candidate Jair Bolsonaro, it is clear that there has been a radical shift in regional politics towards a right-wing ideology that is here to stay for the foreseeable future, and which will surely result in confrontation. 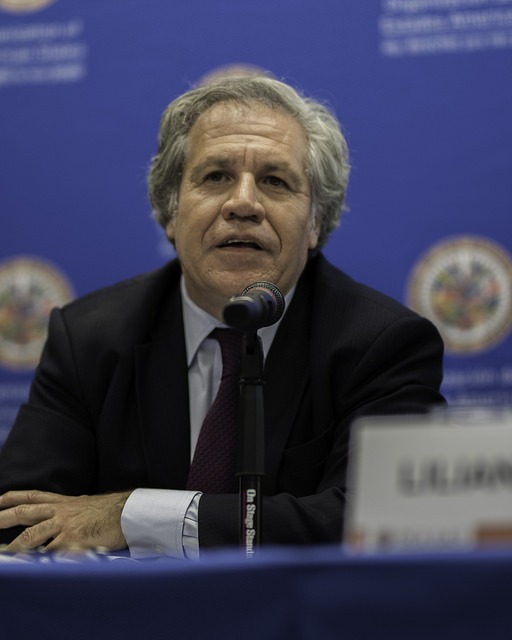 This shift in political ideologies has also permeated the OAS, which is not shielded from external political pressures to act. Ostensibly reacting to claims of its ineffectiveness in the region (especially with regard to Venezuela), the Secretary General of the OAS has made it his personal project to garner an investigation by the ICC into the situation in Venezuela. In fact Almagro recently ignited a firestorm of criticism in mid-September when he remarked “[w]ith regards to a military intervention aimed at overthrowing the regime of Nicolas Maduro, I think we should not exclude any option.” Although he subsequently denied his advocacy of the use of military force in Venezuela, the embattled Secretary General has nonetheless maintained his strong support of the ICC referral.

What the ICC Prosecutor should keep in mind

Without minimizing the severity of the humanitarian crisis facing Venezuela and the strong likelihood that crimes against humanity have been committed in its territory, the referral should be analyzed by the Prosecutor with her keeping in mind the drastic political shift currently occurring within Latin America. From the mounted response to the humanitarian crisis plaguing Venezuela to the proliferation of right-wing governments in the region, it is clear that Latin America is experiencing an internal dilemma fraught with new challenges. Consequently, any decision by the ICC in the situation of Venezuela could be read as a political move in the delicate diplomacy that is reigning in the region.

Though the reasons for the break from traditional Latin American policy are multifaceted and complex, the referral is sure to foment an atmosphere of tension and distrust in Latin America. The Prosecutor should also keep in mind the power play dynamics involved amongst Latin American nations and the OAS, since these countries may try to assert their political agendas through such measures as a referral to the ICC. For these reasons in implementing these measures, the Prosecutor should exercise a high degree of caution. By analyzing the referral within the wider context of Latin American politics, it is more likely that the Prosecutor’s actions can result in peace, rather than chaos.

For a stable peace, a sensible opposition

Trampling on rights by judicial order: the risks of presidential appointments of judges in a personalist era

Confusion in the ICC

When the Truth Prevails, What Happens to Justice?