The Pebble in the Shoe of Latin America 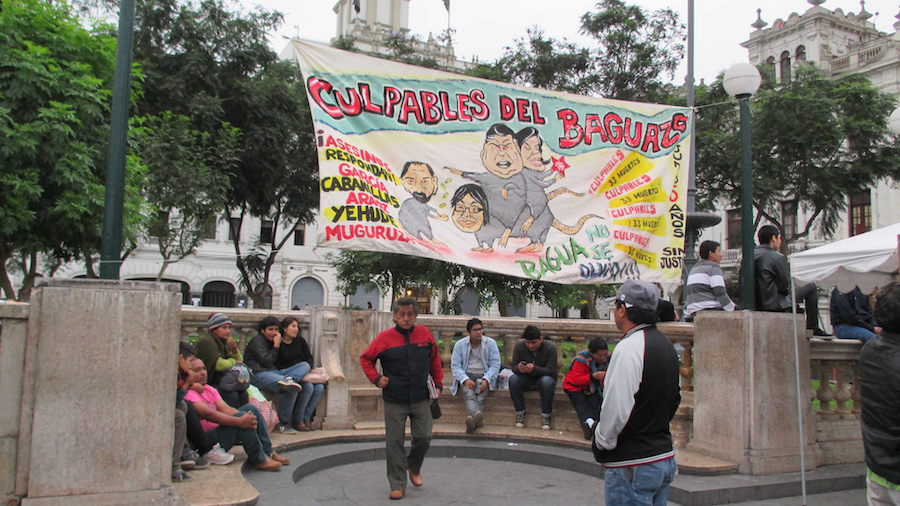 As the representative from Costa Rica expressed, participation “is the heart” of what brought them to the negotiation process.

As the representative from Costa Rica expressed, participation “is the heart” of what brought them to the negotiation process.

For those that do not know, likely the majority, as it has received little media attention and many governments have not advertised it, the region has spent the past two years in this process, which the Economic Commission for Latin America and the Caribbean (CEPAL) is coordinating. The idea of this negotiation is to make “Principle 10” of the Rio Declaration binding, which establishes that the best way to address environmental issues is guaranteeing the participation of all interested citizens. And to do so, it recognizes that it is fundamental for people to have adequate access to information regarding environmental issues, especially when they involve activities that pose risks to their community (such as mining or the construction of a dam or port). Finally, the principle also establishes that in environmental matters, States must guarantee effective access to administrative processes and justice.

With such an agreement, countries in the region would have a tool of international law (such as the Aarhus Convention that European countries have) to demand, among other things, popular consultations for issues that affect the environment, public hearings regarding environmental licenses, and the publication of information regarding extractive industries; mechanisms which currently face strong opposition from governments and companies throughout the region. For example, In Ecuador the government has obstructed the popular consultation regarding oil exploitation within the Yasuní National Park. In Guatemala, although there have been more than 75 popular consultations on environmental issues, their results are still not binding. Similarly, in Peru, the indigenous peoples involved in the Bagua case have not had effective access to legal proceedings, as documented in another blog entry.

Therefore, the fact that the region is participating in this process should give us hope, as it is a step in the right direction toward a more balanced economic model, which allows students and municipalities to participate, in an informed way, in decisions regarding the type of development that they want. Even United Nations experts have recognized that this negotiation is one of the most historically important steps that has been taken to protect and promote environmental democracy at the international level, and will serve as a model for other regions and countries interested in taking such a step. However, the attitude of this small group of countries leaves much to be desired, and is not strategic regarding other, more important objectives.

In the statements we saw, it was clear that these governments are not interested in guaranteeing these rights through a treaty, and they want the weakest commitments possible. For example, Brazil, seconded by other countries, does not want to “guarantee” participation, but rather merely “promote it.” Brazil, Colombia, Mexico and Argentina wish to limit it to mere “intervention” in environmental decision-making. This difference is fundamental, as it marks the subtle line between a merely formal participation and an effective participation. As the representative from Costa Rica expressed, participation “is the heart” of what brought them to the negotiation process, and defining it as intervention in decision-making is a significant limitation of the treaty’s goals.

As if this were not enough, these governments have insisted in changing the rules of the agreement negotiation process. Until now, the process has been transparent and horizontal, allowing any interested person to speak face to face with States. This methodology is so novel that the UN Special Rapporteur on the Environment has proposed it as an example for other negotiations. However, uncomfortable with so much civil society participation supporting a binding agreement, Colombia, with the support of several other States, has proposed limited it to a minimum, ironically, in a treaty regarding access to participation and information. Argentina has also expressed its concern regarding the possibility of participation in this process being viewed as a precedent for other negotiation processes, and insisted that this experience should not be allowed to be cited in other negotiations.

While countries have put their fears regarding this negotiation model on the table, they have not explained why they fear a binding treaty that strongly protects these rights. One may think that they fear that greater community participation or forcing companies to make information public could be a disincentive for foreign investment, in particular in extractive industries, which are governmental priorities for economic development. However, a deeper analysis of the situation shows that this fear is unfounded and short-sited.

If it were true that increasing community and local government participation in decisions regarding the environment or facilitating access to company information would slow foreign investment, Chile and Peru, the main mineral exporting countries in the region, would not be vehemently pushing for a binding treaty.

Additionally, in opposing a binding treaty, these governments do not see that this obstructs other goals. For example, Colombia is shooting itself in the foot with respect to its goal to enter the Organization for Economic Cooperation and Development (OECD). Voting in favor of a regional treaty on rights related to the environment is a perfect opportunity for Colombia and other countries that eventually aspire to enter the OECD to increase their rating in environmental evaluation, which received one of the lowest scores from OECD. Similarly, these governments’ reticence deteriorates their image as environmentally conscious states that they hope to reflect during the climate change meetings (COP 21) that begin in Paris next month. Additionally, preventing the creation of spaces that give voice to communities increases socio-environmental conflicts that already afflict the region, and may frighten off, rather than attracting, the foreign investment for which governments compete.

Fortunately, the negotiations are not over. As civil society it is our job to show this small group of countries the advantages of a treaty that strongly protects the rights to access to participation, information, and justice in environmental matters.

10 years of struggle: the story behind the mining consultation in Cajamarca

Pijao: the “slow” town that is endangered due to mining

Reconciliation through the Environment

Let’s Be Serious: Popular Consultations for Mining Projects Are Viable

Where Are Taxes in Human Rights?