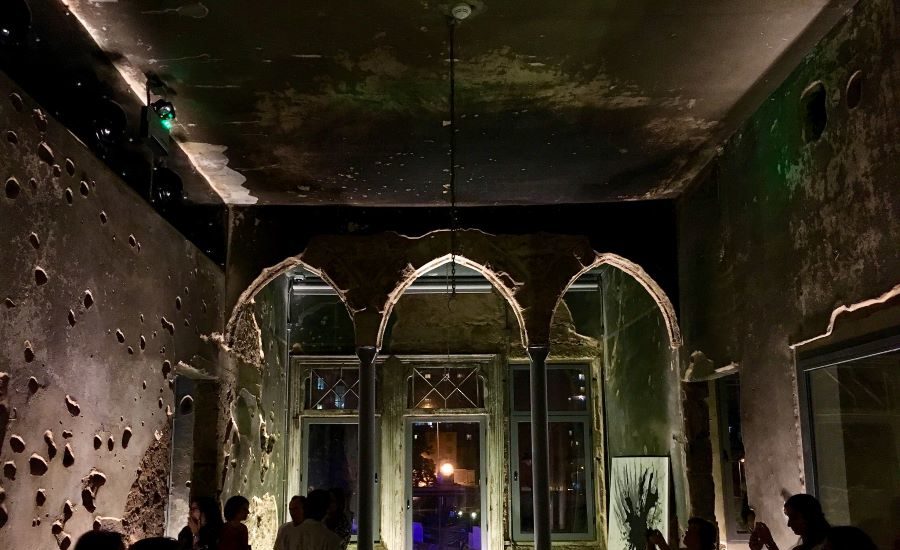 In the midst of a busy traffic intersection, Beit Barakat, or the Barakat House, is an assuming edifice. Most Beirutis pass it by every day without knowing that behind its bullet hole-riddled yellow exterior lie almost a century of memories and a continuing struggle

In the midst of a busy traffic intersection, Beit Barakat, or the Barakat House, is an assuming edifice. Most Beirutis pass it by every day without knowing that behind its bullet hole-riddled yellow exterior lie almost a century of memories and a continuing struggle

BEIRUT, Lebanon– It stands in the corner of Damascus Road and Independence Avenue, along what used to be the “Green Line” that divided Beirut into the Christian East and Muslim West during its bloody civil war that lasted from 1975 until 1990. In the midst of a busy traffic intersection, Beit Barakat, or the Barakat House, is an assuming edifice. Most Beirutis pass it by every day without knowing that behind its bullet hole-riddled yellow exterior lie almost a century of memories and a continuing struggle—from the bourgeois life of the Barakat family who built it in 1924, the terror of violence as it became a sniper’s lair during the war, and today to the complex politics and bureaucracy that continues to characterize modern-day Beirut.

Mona Hallak welcomed us into the building, and as soon as she began speaking, she transformed into a wellspring of emotions, dreams, and nostalgia—muted words, even hurt feelings. Mona, a well-known architect in Beirut who has been one of the cornerstones of the 22-year battle to preserve the building, began by taking us to the center where guests used to enter. As an embodiment of the avant garde architectural genius at the time, what welcomes one upon entering is a large void that opens up to the sky. At that time, the corner of a building was considered the most valuable part and thus was always designed for productive use. But Youssef Aftimos, the first architect of Beit Barakat, decided to leave this precious space empty. His idea was to allow every single room of the building, even those situated at the far back, to have a view of the street (all windows of the rooms are aligned perfectly, allowing for an unobstructed view from the back all the way to the outside world). The Barakat family lived and hosted high-society gatherings on the second floor, while the others were rented out to stores and tenants—a dentist who loved going to the cinema, a hairdresser who spent her lottery winnings to set up her first shop there, and a slew of other characters who consisted the vibrant cultural, economic and political life of Beirut in the 20s.

It was the same architectural genius and its strategic location that made it the perfect outpost for the Christian militias when war broke out in 1975. The Barakat family and their tenants had to flee when snipers took over the building, constructing killing holes and fortifying what once were elegant rooms with concrete, waiting in stillness for hours to shoot at people crossing over the Green Line. Today, one can still see some graffiti written by the former snipers there, an odd remembrance of the lives of the young men who were suddenly entangled in a war that today Lebanon has never really moved on from but decided to simply forget. 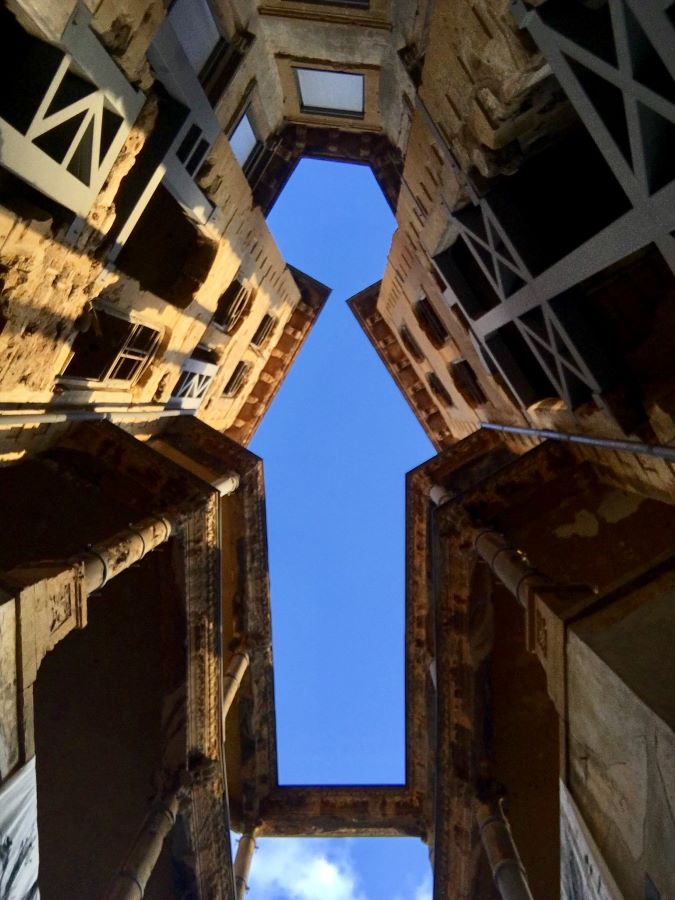 The center, found in the corner of the building, is an empty space that opens up to the sky, allowing all rooms of the building even from the back to have a view of the street. Source: hey tiffany!, Flickr (CC BY-NC 2.0).

What struck me about Mona’s narrative was not only her stories about the building itself, but about the struggle that she has painstakingly fought along with other activists to preserve the building. With the controversial SOLIDEREproject which flattened 80% of the former old downtown of Beirut after the war, Beit Barakat is one of the few remaining structures that allow the Lebanese people to remember their country when Muslims and Christians lived harmoniously together, and the 150,000 who perished from the war that no one wants to talk about now. Falling into decay for many years and later planned for sale by its owners, the sheer activism of individuals who saw its value saved Beit Barakat from forever disappearing from Lebanese memory.

At times during Mona’s talk I kept asking myself, Why spend your life fighting for one building? Then I realized that this was not just about a building, but a country’s memories, its pain, and its internal battle for healing and seeking justice that has marred its politics, its economy and its culture to this day. Museums and monuments have always played a significant role in the transition to peace from conflict in many parts of the world, yet their value is still very much contested if not fully understood (Beit Barakat is now officially named Beit Beirut or House of Beirut, after having been expropriated by the Municipality of Beirut to become the Museum of Memory of the City of Beirut). 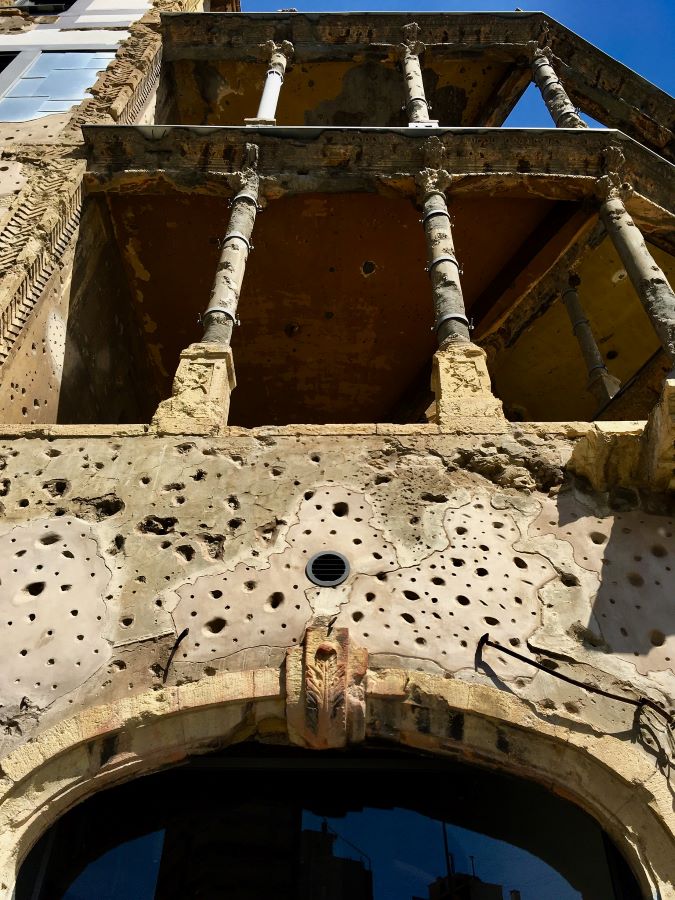 The Inter-American Court of Human Rights was a pioneer body that ordered the building of monuments and other sites of remembrance as a form of reparation for victims of war in Latin America, recognizing that rendering justice is far beyond monetary compensation or even the imprisonment of perpetrators of war crimes—it is about finally recognizing the victims’ pain, the memories of those who died, and ensuring that a people never forget of what brought them to war in the first place. Truth commissions established after the end of conflict in countries such as Chile, Guatemala, South Africa, Ghana, and Sierra Leone understood this (although it is argued that even with these institutions, the memorialization efforts were a mere afterthought).

Barsalau and Baxter claim that “national and international actors involved in transitional justice—especially in tribunals and truth commissions—have largely missed the opportunity to incorporate memorialization into their initiatives. The repeated failure to deal with memorials (whether ad hoc or sanctioned) and their potentially negative impact can imperil transitional justice efforts and peacebuilding.” Especially in the case of Lebanon where an amnesty law saved all those involved in crime during the war from prosecution and where school textbooks do not even mention the war, a collective amnesia can be countered by, yes, one building. Some even argue that the victim reparation and assistance regime within the International Criminal Court can include the building of monuments, shrines and museums.

This tension between remembering and moving on, or what others would argue as the clashing ideals of justice and peace, is often the most complicated and emotional question that faces any society transitioning from conflict. This was certainly at the center of the Colombian peace process that saw a nation divided into half, from those who demanded strict accountability for crimes and those who advocated for an alternative form of justice that would honor what happened without stirring up further political and societal crises that could throw the country back to war. In short, remembering need not necessarily mean failing to achieve peace.

The solution is never perfect, but completely forgetting jeopardizes the possibility for genuine healing by a society. People like Mona, and various activists—from museum curators, artists, urban planners, and human rights activists—spend their lives fighting to convince society on how the balance can be struck. Beit Barakat, its bullet holes, and its void that looks up to the sky are a testament to scarred societies around the world of the real life stakes of remembering, and of the politics we play around one building.

*To watch Mona Hallak give a tour of Beit Barakat, see the following videos:

The links between economic power and conflict: a major challenge for the Truth Commission

The National Comprehensive Program for the Substitution of Illicit Crops (PNIS) needs more concreteness, a road map and a more global vision for integral rural development