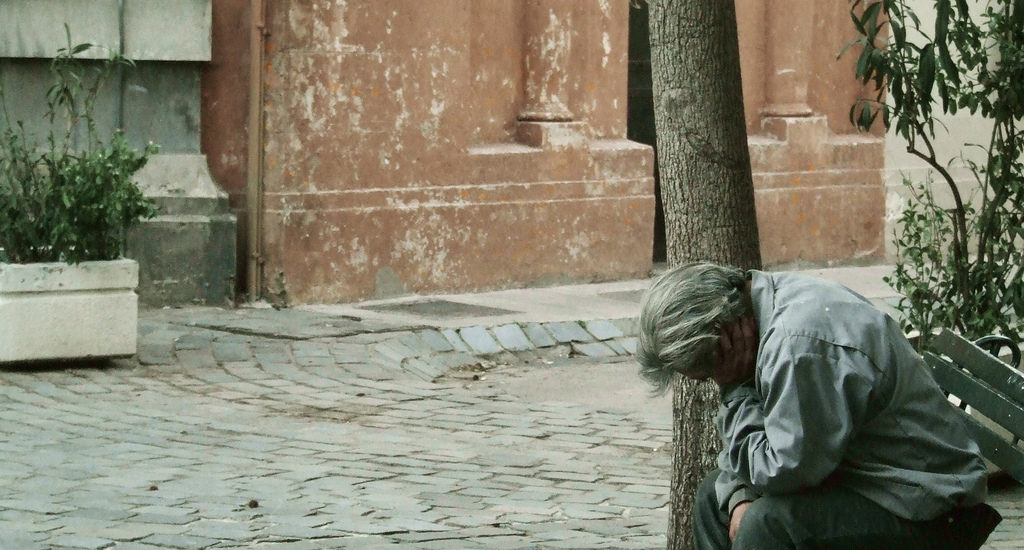 Far from being an issue of self-care, about which we can speak as casually as we do physical illnesses, mental health is something that we prefer to keep in silence. It’s a topic that carries certain collective fear, shame, and prejudice.

Far from being an issue of self-care, about which we can speak as casually as we do physical illnesses, mental health is something that we prefer to keep in silence. It’s a topic that carries certain collective fear, shame, and prejudice.

At what point does happiness become mania, does sadness turn into depression, does apprehension become anxiety, does fear enter the realm of phobia? To what are we referring when we speak about mental illnesses? With these questions begins the special November edition of Time magazine, dedicated to a topic that is still difficult for us to discuss: mental health. Understanding our own mind, asking ourselves these questions and understanding the challenges of mental health in order to find adequate treatments has been the object of study for a variety of disciplines for centuries. Counter to what we might think, mental health is not only a medical issue, but also a matter of philosophy and language: our words reflect our understanding of mental illnesses, our openness to exploring them, and ways that we have for approaching those affected by them.

Mental illnesses have been the object of stigmatization, pathologization, and taboo for decades. Far from being an issue of self-care, about which we can speak as casually as we do physical illnesses, mental health is something that we prefer to keep in silence. It’s a topic that carries certain collective fear, shame, and prejudice—all of which are rooted in history and culture through literature, film, the information that we receive through the media, and in the very language that we commonly use to refer to people who face mental disorders. 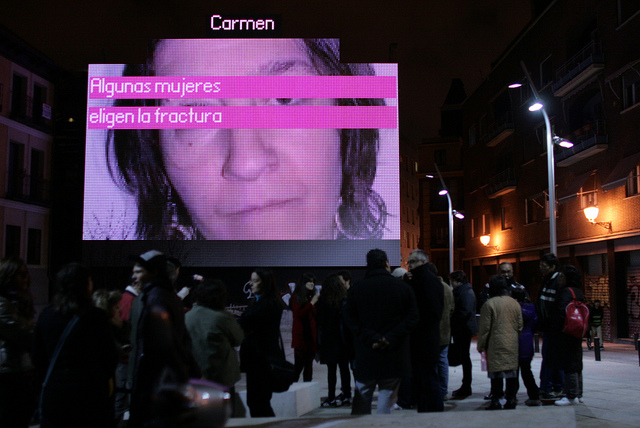 A campaign in Spain against the stigma around mental health presents testimonies of people living with such illnesses. Source: MediaLab Prado, Flickr (CC BY-SA 2.0).

Unlike diseases such as obesity, diabetes, or cancer, where it is possible to have exams that demonstrate the existence of a problem through measurements and images, mental illnesses seem to reside only in our words and actions, making them more difficult to detect, accept, make visible, and provide adequate treatment for. For this very reason, mental health and psycho-social well-being are topics that remain invisible when forming public policies related to health.

Our language is important, and, in terms of mental health, the words we use frame the ways in which we reflect on and understand mental illnesses. To treat these illnesses, we must first recognize and understand what we are talking about. According to the World Health Organization, mental health is not only the absence of mental disorders, but also “a state of well-being in which the individual realizes his or her own abilities, can cope with the normal stresses of life, can work productively, and is able to contribute to his or her community.” Mental health and psychological well-being are an integral part of what we understand as “health” in general; they are essential for the development of both our individual and collective abilities of thinking about and interacting with others.

Just as in physical health, mental health and the people who face mental illnesses see these disorders manifest themselves in different ways: changes in mood, thoughts, and perceptions about our conduct and our relationships with others. The combination of these changes produces a wide array of mental illnesses, ranging from depression, anxiety, bipolar disorder, and even developmental disorders.

According to reports by the WHO, at least 25% of the world’s population has a mental illness. Half of these illnesses start at age 14, though the majority are neither diagnosed nor treated. Likewise, mental disorders represent 16% of the world’s burden of disease and injury for people between 10 and 19 years of age. Among the three leading causes of death globally for people between 15 and 44 years old is suicide, which has grown by 60% in the last 50 years. 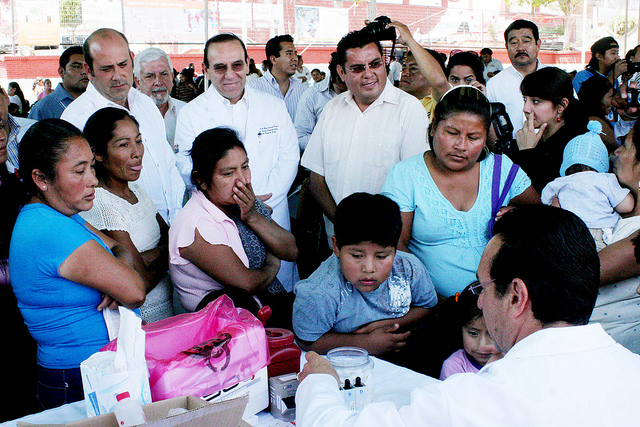 In Mexico, a doctor discusses various medical services, including those related to mental health. Attending to mental health requires all levels of medical care to be involved. Source: German Tenorio, Flickr (CC BY-SA 2.0).

Despite the data, it seems that there are at least two difficult, invisible barriers to overcoming mental illnesses and garnering attention for the problem. The first is the stigma. Mental illnesses have historically been associated with a loss of control. As evidenced by the epidemiologist Heather Stuart in her book, Paradigms lost: fighting stigma and the lessons learned, people dealing with mental illnesses are often portrayed on television and in movies as outcasts, without family ties, without an occupation or social identity, and without control over themselves. Used either to scare the audience or provoke laughter, people with mental illnesses are depicted as unbalanced and abusive. Our discourse, then, is important: our language can either misrepresent, isolate, and hurt, or it can be used to create empathy and to break down stigmas that have been culturally reproduced and strengthened through time.

According to David Bjerklie in his article, Finding the right words, the feelings and emotions of which we are aware are those that we have learned to recognize and to name. Naming and recognizing mental illnesses is an important step in the fight against the stigmatization and prejudice that surrounds these illnesses. The language we use also affects the attitudes that our societies have towards mental illnesses, and the treatments that we provide to millions of people struggling with mental disorders.

Naming and talking about these issues is important, as silence does not only affect the perception that we have as a society around mental illness. Silence and stigmatization also weigh upon those struggling with mental illness, as they are the ones who directly suffer from the consequences and manifestations of social rejection, job loss, and learning difficulties. Continued silence creates further difficulties for enduring and sustaining lifelong projects.

Determinants of Mental Health: How are we in Latin America?

The second invisible barrier that is necessary to overcome in order to better understand mental health consists of providing evidence for the determinants that affect mental health: violence, socio-economic pressures, stressful labor conditions, discrimination, social exclusion, unhealthy lifestyles, diverse vulnerabilities, among others. Added to this are biological and genetic factors that predispose and make some individuals more vulnerable to problems with mental health than others. 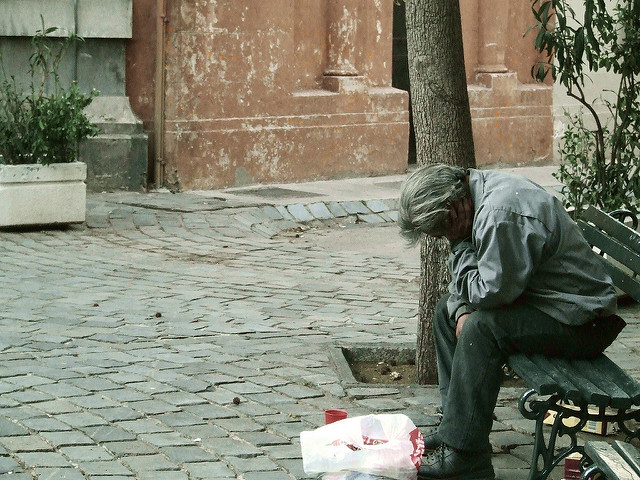 Those who live in poverty are at a great risk for mental illnesses, and also have the least access to adequate care. Source: Carlos Varela, Flickr (CC BY 2.0).

According to the World Psychiatric Organization, it’s expected that by 2020 depression will be the second cause of disability around the world, before cancer and cardiovascular disease. Currently, in Latin America depression is a growing illness, present in at least 5.8% of Brazil’s population, 5.5% in Cuba, 5.2% in Paraguay, 5% in Chile and Uruguay, 4.8% in Peru, and 4.7% in Colombia. Furthermore, according to the World Bank, mental and neurological disorders represent nearly a fourth of illnesses in Latin America and the Caribbean, especially affecting the poorest, who are at the highest risk of diseases such as depression and who have the least access to adequate care.

Less than 2% of the region’s health budget is destined for mental health (WHO), which is reflected in the fact that, despite the WHO’s recommendation of 10 mental health professionals for every 100,000 inhabitants, according to the WPO, the median in South American countries is 2.9 psychiatrists for every 100,000 people and 1.5 in Central America. The lack of mental health professionals creates further deficiencies in training health professionals. Attending to mental health requires even those working in basic levels of healthcare to be prepared to address the diverse range of mental illnesses. Furthermore, there are difficulties in access to treatments, high medication and treatment costs, and a lack of public education and sensitivity campaigns about the topic.