Living and dying without pain is a very important component of the right to health. Consequently, States have an obligation not only to remove obstacles that prevent patients from obtaining palliative drugs, but also to promote more flexible programs and policies that facilitate access to these medicines.

Living and dying without pain is a very important component of the right to health. Consequently, States have an obligation not only to remove obstacles that prevent patients from obtaining palliative drugs, but also to promote more flexible programs and policies that facilitate access to these medicines.

Carlos was 26-years-old and was studying at the University of Maracay in Venezuela.  One day he began to feel severe pain in his arms and legs. After endless tests and visits to the doctor, he was diagnosed with cancer. Although at first, Carlos received the treatment that he needed, the last years of his illness he suffered without any treatment or medication, such as morphine, that would help him withstand the severe pain he felt. I learned about Carlos’ story through Mary, his aunt, who arrived to Bogotá a couple of months ago after experiencing a common tragedy taking place in Venezuela today: the shortage of medicines. Mary had to migrate a few days after the death of her nephew because she needed to obtain medication for her son, who suffers from a mental health disorder.

Just like Carlos, many people with terminal illnesses in Venezuela live with terrible pains that deteriorate considerably their quality of life, in a country where the shortage of opioid analgesics prevents them from coping with this process with dignity. According to the American Cancer Society, more than 23,000 people die from this disease every year in Venezuela. Despite this being a considerable number of people, the Sociedad Venezolana de Medicina Paliativa (SOVEMEPAL) estimates that only 10% of patients requiring palliative care have access to this type of medication.

The shortage of medicines in Venezuela’s health system has forced those in need to look for medicine outside the country or on the black market, where prices are exorbitant. Although morphine has a relatively low cost –$2.00 USD per milligram, a single contraband ampoule can cost between $12 and $40 USD. Meanwhile, the monthly minimum wage in the country is $26 USD. Thus, the efforts of friends and family to alleviate the pain of their loved ones is often insufficient since a patient with severe pain may need between 3 and 4 ampoules of morphine daily. Many patients who find themselves in this situation have to choose between living with hunger or pain.

Although what is happening in Venezuela may seem exceptional due to the serious economic crisis the country is facing, the limited access to opioid analgesics is one of the main barriers to guaranteeing the right to health in many countries across Central and Latin America. The report “Palliative Care: Addressing Health through a Human Rights Approach,” shows that the use of opioid analgesics in the region remains relatively low. In 2015, the average morphine consumption in the continent was 2.21 mg per capita, excluding the United States and Canada where consumption totaled 89.35 mg per capita. Likewise, the Lancet Commission found that low and middle income countries around the world have less access to these drugs when compared to regions such as North America, Western Europe, and Oceania. This results in 25 million people worldwide dying each year while feeling pain that could have been avoided.

Despite the fact that many of the most common opioid analgesics to treat severe pain are included in the World Health Organizations’ list of essential medicines and that both the Special Rapporteurs of the United Nations on the right to health and against torture have argued that the failures of States to ensure access to these drugs violates the right to health and protection from cruel, inhuman, and degrading treatment, patients with chronic pain continue to face multiple barriers. A survey conducted by national medical authorities and health professionals found that the main barriers to access opiod analgesics worldwide are a lack of financial resources, normative, social and cultural restrictions, and the insufficient education of professionals to prescribe and administer these medications.

In Central America and Latin America, the three countries with the lowest morphine consumption per capita are Honduras, Guatemala and Nicaragua, followed by Venezuela and Bolivia. In the case of Guatemala, in addition to the lack of understanding and opiophobia of both doctors and patients, one of the main barriers to access are the procedures for delivering these medicines. Each medical prescription must be authorized by the Ministry of Health located in the capital of the country, which evidently restricts access for those residing in remote areas. 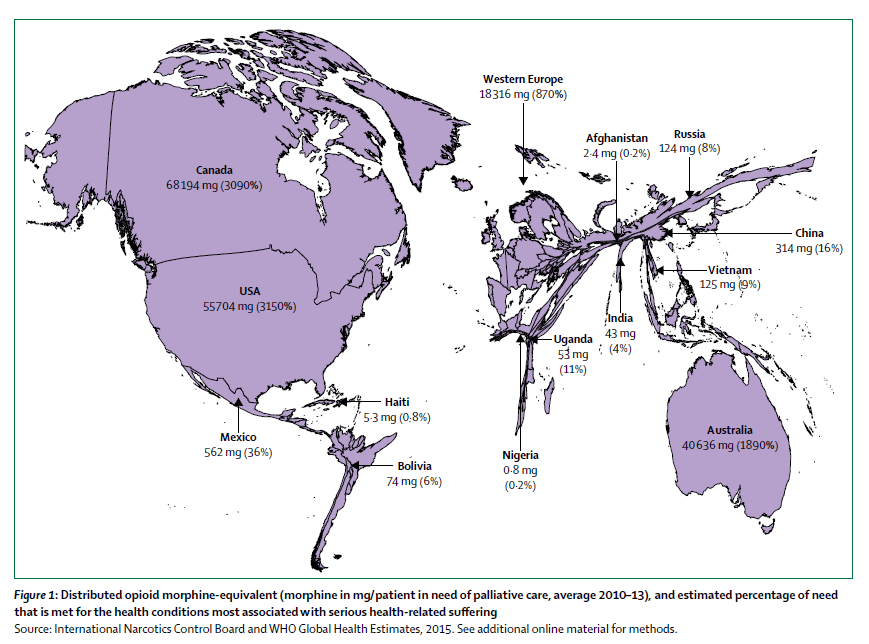 Countries like Argentina and Costa Rica have better indicators of access to pain relief medications in patients with terminal and chronic diseases. For example, Argentina has an opioid supply program that encourages national production and that was created out of an alliance “between government authorities working on health, drug surveillance and control authorities, and specialists in palliative and pharmaceutical care, with the purpose of designing pharmacological presentations that would be useful for treating chronic and severe pain.”

Meanwhile, Costa Rica has one of the highest consumption of morphine in the region – 4 milligrams per capita – which is due to the fact that it has a wide distribution system of opioid analgesics through a public network of hospitals and pharmacies as well as existing guidelines for prescribing them. Additionally, these drugs can be administered in hospice facilities and at the residential level, which facilitates access for patients.

These two countries ratified the Inter-American Convention on the elderly, which established that States must guarantee the availability and access to medicine necessary for palliative care. Despite the importance of this international standard and the advocacy of civil society organizations, including Dejusticia, through guides and toolkits to promote its ratification and implementation, many States are still late in doing so.

Living and dying without pain is a very important component of the right to health. Consequently, States have an obligation not only to remove obstacles that prevent patients from obtaining palliative drugs, but also to promote more flexible programs and policies that facilitate access to these medicines at all levels of health care and with the least red tape possible, considering the special conditions of those facing terminal or chronic conditions. To achieve this, among other measures, it is necessary to rethink about national policies regulating this medicine, control the market prices, promote training of health personnel in opioid treatment, and strengthen patient associations to demand access to these analgesics. This, so that, unlike Carlos, many other patients will be able to live the process of their illness with dignity and die without pain.

* Lucía is a researcher at the Center for the Study of Law, Justice and Society (Dejusticia). You can email her at [email protected] or follow her @aydalucia