This is How Slavery Works in the 21st Century 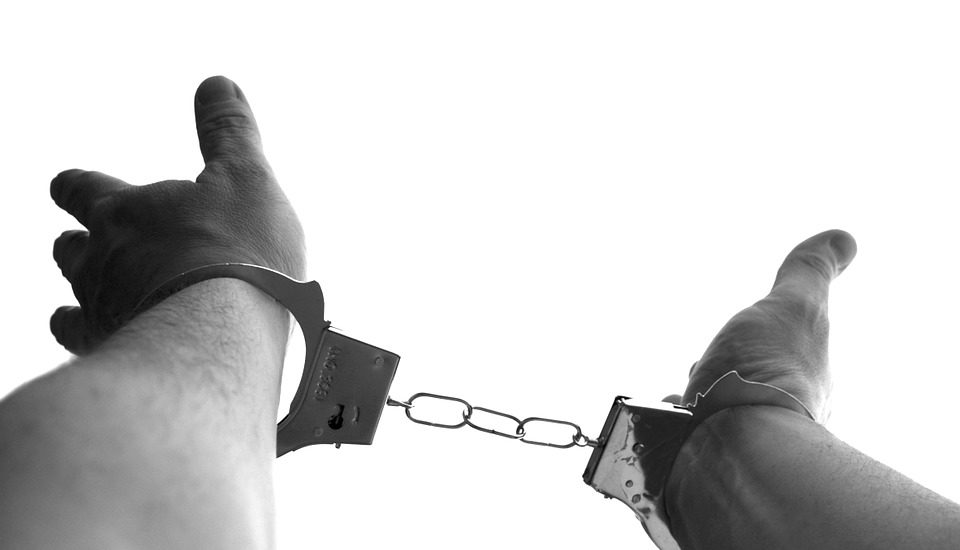 The International Labor Organization (ILO) estimates that there are approximately 20.9 million slaves, of which 26 percent are children. This is more enslaved people than during any other point in history.

The International Labor Organization (ILO) estimates that there are approximately 20.9 million slaves, of which 26 percent are children. This is more enslaved people than during any other point in history.

Contrary to what many think, slavery did not end in the 19th century, or even in the 20th century. In 1850, in the southern United States, a slave cost around $40,000 in today’s dollars, while currently, the median cost of a slave is USD 90. Modern slaves, regardless of the type of slavery to which they are submitted, are cheap and disposable, as when one becomes ill, she can be easily replaced by another. But in addition to the cost of slaves, in the 19th century the practice was legal (which does not mean that it was acceptable), but today it is an international crime.

Abuk Bak, from Southern Sudan was kidnapped in 1987 in a slave raid. She was raped, physically assaulted so severely that she almost died, and enslaved for ten years before the ethnic-separatist movement in Darfur became internationally visible. After being orphaned at age five, Michelin Slattery, from Haiti, was a victim restavec, a form of childhood slavery that is institutionalized in her country. She was a domestic worker in her aunt’s home until she was 14, and was later enslaved by a cousin in Connecticut, USA, until she could escape four years later, in 1998. Karla Jacinto, a Mexican, was raped around 43,000 times after being captured by a network that traffics women into sexual abuse. She was a sex slave in her country from age 12 until age 16, when she was finally rescued in 2008, together with a son she had given birth to at age 15 by her pimp. Nohemí, subjected to physical mistreatment and forced to work from the time she was a child by a Colombian family in the 1960s, could only talk about it when the daughter of her enslavers revealed the story more than 50 years later, when her tormentors will never compensate her for her suffering. None of these women received compensations, and were condemned to abandonment, violence, and exploitation.

The stories of these four women are just a microscopic point of atrocity in a universe in which slavery continues growing in various forms, and affects women, men, and children. Human trafficking is the modern concept that describes these new forms of slavery. Sex trafficking, forced labor, domestic slavery, bonded labor, and child exploitation are some of the forms that modern slavery takes. None is less atrocious than the others, and they all involve the same premise: those in situations of vulnerability used by systems of perverse exploitation, public and private, where unimaginable human rights violations take place. Physical and psychological violence, grueling work shifts without pay, isolation and confinement in subhuman conditions are only some of them.

There are factors that create contexts amenable to slavery. Growth of impoverished populations, the precarious conditions of migrants, structural discrimination against certain populations, and the absence of State protection are some catalysts for slavery. In many cases, those who wind up working in extremely precarious conditions do so out of necessity to overcome extreme poverty, or because of circumstances of vulnerability, such as abusive family environments.

The International Labor Organization (ILO) estimates that there are approximately 20.9 million slaves, of which 26 percent are children. This is more enslaved people than during any other point in history. The ILO indicates that in 2012, 76 percent of slavery was related to work, whether forced, bonded, domestic, or child exploitation. The remaining 22 percent is sex trafficking, where children are also exploited. But the same body also states that this is not barbarism relegated only to developing countries. Although it is prevalent in Africa and Asia (4 and 3.3 slaves per 1000 inhabitants), in Europe and North America there is also slavery, with an estimated 1.5 slaves per 1000 inhabitants. Latin America does not escape this situation, which around 3.1 slaves per 1000 inhabitants. 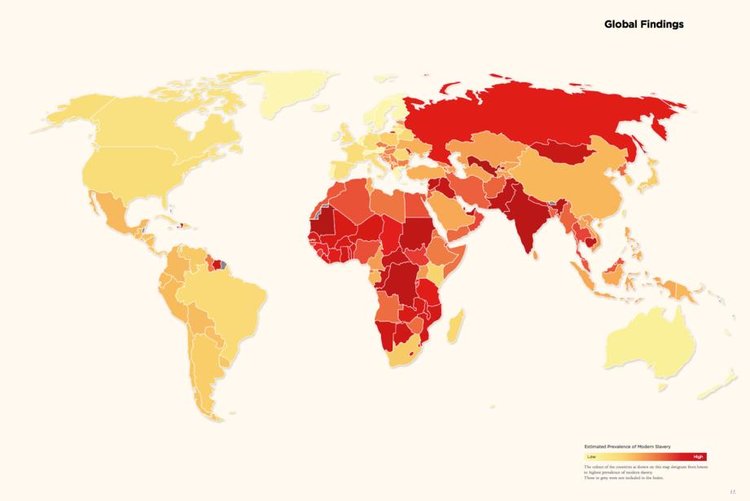 This is how global slavery was distributed in 2014, according to Global Slavery Index.

The stories of Abuk, Michelin, Karla and Nohemí seem foreign and distant, but they are much closer than we think. Many of today’s slaves work in industries such as agriculture, fishing, construction, manufacturing, and mining, which produce primary materials that we use daily, such as tomato, cacao, tuna, shrimp, cotton, sugar, iron, and gold. Additionally, in manufacturing, many clothing and shoe companies, such as Forever 21, Abercrombie & Fitch, Quiksilver, Sketchers, H&M, Primark and Lacoste, as well as electronics producers, such as Apple, Samsung and Sony, prefer slavery practices that generate annual profits of more than USD 150 billion.

Being conscious that this is a current problem of gigantic proportions is a first step to doing our part to overcome a 19th century problem of global dimension. The second is to try to commit to more responsible consumption, (buycott), which is difficult, but could help in the long term to alleviate the problem; and third, demand that States implement norms and protection measures for migrants and those at risk of slavery. We can start by convincing governments to sign and ratify the 2014 Protocol of the ILO Convention against Forced Labor, which only Niger has ratified, as a sign of commitment to fight against an international crime.

If for some reason we were outside the chain of slavery (which is unlikely, and can be checked at SlaveryFootPrint) and had no responsibility for the slavery of millions of people, the fight against this atrocity is an issue of showing a minimum level of empathy and humanity. Many slaves come from countries like Mexico; it’s estimated that there are 266,900 victims of modern slavery in the country, who are all human beings like you, your family, your friends, and like me.

This blog was originally published in Spanish at Vice.com.

A World with Hunger

This Is How Slavery Works in the Twenty-First Century

Who Says the Truth?

Do We Want Peace?

States must guarantee the ESCR of refugees and migrants