Recognizing the ethno-racial biases of marijuana prohibition, the opening of the legal market has involved a series of measures aimed both at compensating for damage caused over the course of prohibition, and at overcoming conditions of economic inequality.

Recognizing the ethno-racial biases of marijuana prohibition, the opening of the legal market has involved a series of measures aimed both at compensating for damage caused over the course of prohibition, and at overcoming conditions of economic inequality.

After decades of repressive legislation, marijuana has finally reached the light at the end of the prohibition tunnel. What started with regulations for the recreational use of cannabis in Colorado and Uruguay is now entering the market in full force in Canada. Without a doubt, the opening of these markets has led to economic prosperity and the permanent increase of green capital. Marijuana has already skyrocketed in share growth, overtaking business giants like Apple, Microsoft, and Amazon in profit margins on Wall Street. What’s more, it’s thought that by the year 2020, global expenditures on cannabis products could rise to 32 billion dollars. 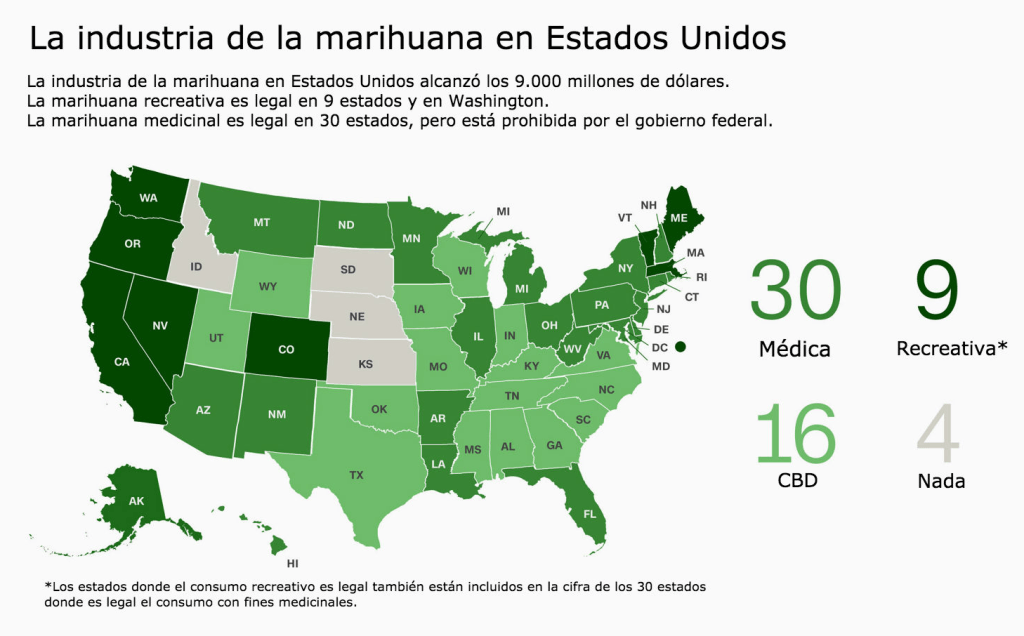 Title: The Marijuana Industry in the United States.
The marijuana industry in the United States is worth 9 billion dollars. Recreational marijuana is legal in nine states and in Washington D.C. Medical marijuana is legal in 30 states, but is prohibited by the federal government.
*The states where recreational use is legal are also included in the 30 states where medical use is legalized.
Source: CNN en español.

These earnings are providing public coffers an important sum of money. According to Javier Hesse, in 2017 the state of Colorado collected more than 250 million dollars in taxes. In California, it is estimated that the cannabis industry will provide more than 1 billion dollars per year. So much money has been derived from legalization that this same state suggested creating a public bank to administer the resources from the industry, which currently remain outside the financial system due to continued prohibition by federal legislation.

Beyond the well-known economic benefits, this type of regulatory policy is a huge step towards ending the war on drugs, at least insofar as it relates to cannabis, which has caused profound damage to individuals and communities in North America, especially to those historically discriminated against. In both the United States and in Canada, the application of anti-narcotic laws has had a profoundly negative impact on black and Latino populations, as well as low-income communities. For example, in Toronto from 2003 to 2013, the arrest rate for cannabis possession for people who were black was triple the rate of the white population. In 2015 in California, the probability of being arrested for a marijuana-related offense was five times greater for someone who was black than for someone who was white. 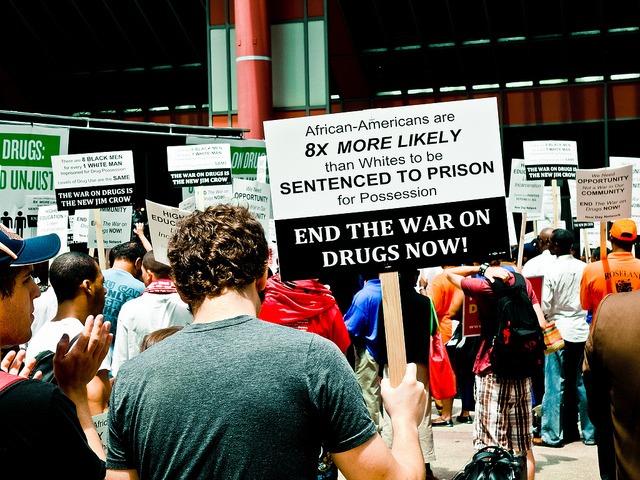 Recognizing the ethno-racial biases of marijuana prohibition, the opening of the legal market has involved, in various ways across different legislation, a series of measures aimed both at compensating for damage caused over the course of prohibition, and at overcoming conditions of economic inequality. Some measures focus on individuals and their past charges, others are directed at those communities that are especially affected by drug policies. Others still invest resources obtained from taxes on the cannabis market in environmental protection or the construction of parks, schools, or access to health services.

In some states in the United States, applying cannabis prohibition implied restricting access to loans for education and housing, as well as—along with criminal charges given for life—the restriction of political or voting rights. The racial discrimination of drug policies forced between hundreds and thousands of Afro-descendents and Latinos into cycles of poverty, which are only just beginning to be addressed by cannabis regulation.

Legislation in California, which came into effect in January of 2018, created reparation measures in three senses. It allowed for the removal of criminal records or the termination of prison sentences for charges related to cannabis. The legislation also ordered the investment of $50 million dollars annually to community reinvestment projects, starting with $10 million in 2018 and growing by $10 million each year, then stabilizing after the fifth year (2022). The legislation even considered the possibility of providing preferential treatment to black and Latino applicants when issuing licenses.

Compensatory measures for the criminalization of Marijuana in California 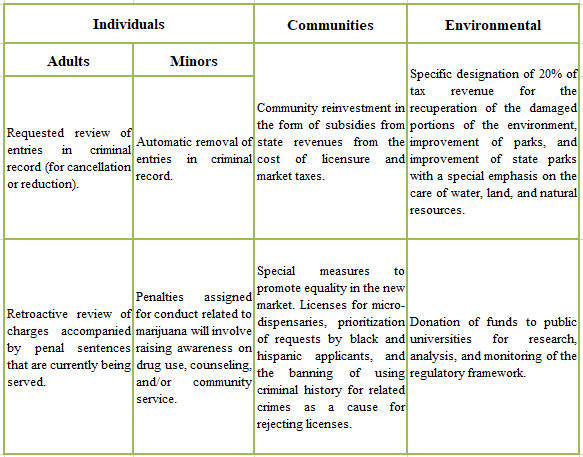 In line with Californian regulation, states such as Massachusetts, Missouri, North Dakota, Michigan, New York, and New Jersey are discussing the possibility of or have approved regulations related to affirmative measures that eliminate charges from criminal records and promote the participation of those affected by the war on drugs in the new industry as means of social and economic inclusion, recognizing the impact that the racial profiling of anti-drug policies has had. In New York, more than 400 million dollars of tax revenue will be dedicated to community development, another $100 million to primary and secondary education, an equal sum to public programs for the treatment and protection of addiction as part of health and public education, and the remaining $200 million to community programs focused on reversing the damage caused by the war on drugs.

We are not able to comprehend all of the positive and negative impacts that this economic cannabis boom will have. However, it is a step in the right direction to redirect the tax revenue of an industry long controlled by illegal actors towards the provision of health and educational services, the improvement of public spaces, and the protection of the environment. It is precisely this that supports the idea that regulating drugs can help to correct some of the mistakes of the terrible anti-narcotic strategies that began in 1961.

Decriminalizing marijuana and legalizing it through a broad and coherent regulatory framework does not only offer the possibility of accepting its use and its commercialization, but is also an opportunity to repair the hurt caused by decades of the war on drugs. Across the rest of the continent, we still have time to overcome the moral short-sightedness that surrounds drugs, with regulatory frameworks that effectively control the industry, and at the same time transform the lives of those affected by the violence of drug policies.

*Ángela María is a fellow in the drug policy area at the Center for Law, Justice and Society (Dejusticia).

The State Created a Vicious Cycle for Coca Producing Communities