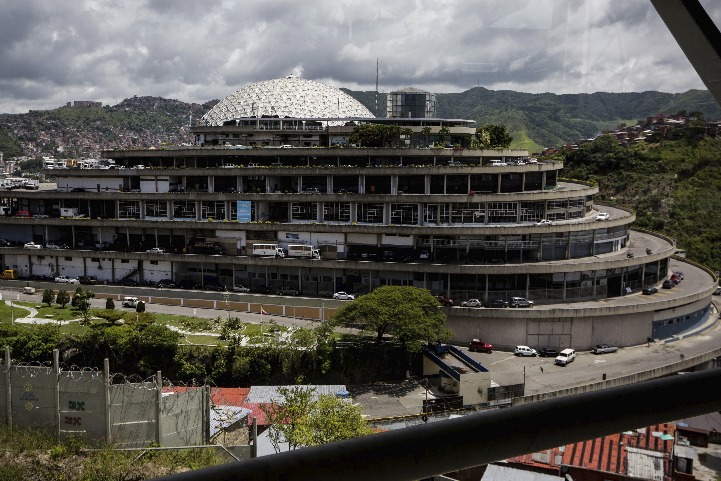 El Helicoide gets its name from the geometric shape of the building that houses the prison, which resembles a spiral. The crisis in the prison and the elections this Sunday could worsen the spiral of Maduro’s regime towards arbitrariness.

El Helicoide gets its name from the geometric shape of the building that houses the prison, which resembles a spiral. The crisis in the prison and the elections this Sunday could worsen the spiral of Maduro’s regime towards arbitrariness.

The riot in El Helicoide, the jail for political prisoners under the Maduro regime, brought to light what research and human rights centers have been denouncing for some time: that the Venezuelan government imprisons at will, without the most elementary guarantees of due process and without any consideration for the dignity, integrity, and health of the detainees and their families.

The case of the young Colombian-Venezuelan Juan Pedro Lares, on which I have written other columns, illustrates the situation. Lares has been arbitrarily detained for ten months in El Helicoide, without any official process against him and without even appearing on the list of the prison’s detainees. His crime? He happened to be resting at home when the SEBIN, Maduro’s political police, raided his home to capture his father. He’s one of the many mayors and politicians critical of the government who have been arrested to be prevented from participating in the government’s periodic “free” elections, like the upcoming one on Sunday.

You can also read: Colombian mother asks the government for help to locate her arbitrarily detained son in Venezuela

Since then, Lares’ fate seems similar to that of an unknown number of prisoners who have been detained in El Helicoide. I’ve heard similar stories in recent conversations I’ve had in Cúcuta, the city on the Colombia-Venezuela border, with relatives who are looking for their loved ones and organizations to support them. The SEBIN denies the basic right of detainees to receive visits from their lawyers and relatives (Juan Pedro’s parents have been able to see him only four times, and those due to pressure from the Colombian Ministry of Foreign Affairs and NGOs). When they do conduct criminal procedures, the detainees must pay their way to be heard in the courts—this, in a country where even money and gasoline are scarce. And even when a judge does in fact venture to issue a release order, SEBIN, which functions as a parallel state, simple ignores it.

Though the situation has worsened under Maduro, it began in the last few years of the Chávez government, who created the SEBIN to “guarantee continuity and consolidation in the power of the Bolivarian Revolution.” Even before it was established in 2005, Chávez’s government prevented the Red Cross, the Inter-American Human Rights Commission, and any other human rights entity from entering prisons. There is thus no independent verification of the number and conditions of persons deprived of their liberty. Only figures and cases that NGOs, such as Foro Penal and Provea, are able to document are publically known.

The sad turn of history is that it was organizations like Provea that successfully and coherently advocated for the rights of an inmate named Hugo Chávez when he was in Yare prison after the 1992 coup attempt. The same rights that Chávez’s successors deny Juan Pedro Lares and many other Venezuelans and foreigners that are detained and mistreated in prisons without due process.

El Helicoide gets its name from the geometric shape of the building that houses the prison, which resembles a spiral. The crisis in the prison and the elections this Sunday could worsen the spiral of Maduro’s regime towards arbitrariness. They may also increase opportunism among the Colombian presidential campaigns, to whom Venezuela seems to only matter insofar as it can gain them votes.

Against such risk, the international community must demand that the Maduro government allow international entities, such as the Red Cross, to visit and verify what occurs in the labyrinth that El Helicoide and other Venezuelan prisons have become.