In addition to the presidential election, the US voted on Ballot Measures. This electoral exercise is quite different than the presidential one, which has been heavily criticized these last couple of days. The process of ballot measures allows US citizens to make new or recently passed legislation subject to the popular vote. This initiative emerged in the Progressive Era in the 20th century to counteract monopolies within the state legislatures.

How does it work? Citizens must apply to obtain an official petition serial number and then circulate the petition for signatures from voters. If the initiative collects enough valid signatures (the required number varies from state to state), it can be put to popular vote. Arizona, California, Colorado, North Dakota, Oregon and Washington are the states in which more than the 60% of initiatives have taken place.  Since 1900, 14,000 measures have been decided by popular vote (61% approved and 39% defeated). The process of direct democracy allows citizenry to directly engage and participate in policy making.

A lot happened this year through ballot measure. Below are only a few that caught my attention. Some are very progressive measures, especially those in the state of California, while others can be seen as a pushback to recent progressive victories:

One special case is Amendment 71 in Colorado:

A response to critiques that Colorado state constitution was easily changed, the Colorado Imposition of a Distribution Requirement for Citizen-Initiated Constitutional Amendments Initiative, known as Amendment 71, was included in the ballot and passed. The campaign slogan was “Yes on 71. Raise the bar. Protect our Constitution.” This was the result:

The ballot was written as follows:

(2) The more extensive geographical distribution (2% of registered voters, not active voters, in each of the 35 state senate districts) can assure a more representative model. But collecting signatures not only in heavily populated urban areas but in sparsely populated rural areas increases the costs of the initiative process. Increasing the costs advantages private interest petitions, which people benefitting from enactment can fund. 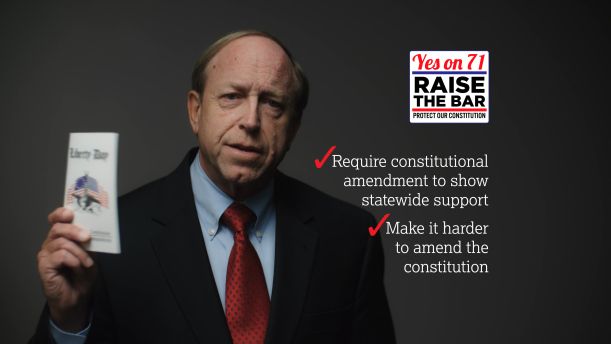 Ad campaign in favor of the 71 Amendment. Photo by: http://www.raisethebarco.com

The passing of this amendment, whereby the strictest distribution requirements are implemented, is a clear attempt to restrict people’s right to the initiative process. A more extensive geographical distribution and the required 2% of valid signatures (registered voters in every district) increase the costs of the initiative process as the communications and pedagogical strategies and the signature collection need to be wider. The higher costs benefit the richer.