Who Breaks a Butterfly on a Wheel?

A common theme in modern dictatorships is a being at odds with art. The conflict between the two is paradoxical in how art ends up outlasting dictatorships, despite lacking the armies of the dictators, but this outcome is inherent in the nature of dictatorships and art.

On May 7, 2016, Egyptian counterterrorism forces arrested a 19 year-old member of a youth satirical group, called Atfal al-Shawarea (Street Children), which makes social and political satire videos using camera phones and uploads them to social media. Three days later, the counterterrorism forces rounded up the remaining members of the group and charged them with instigating terror. These arrests form part of a wider crackdown on virtually all aspects of the Egyptian public sphere, ranging from activists, civil society, journalists, academics, youth drinking tea in cafes, and artists. Egyptian artists including novelists, poets, graffiti painters, satirists, writers, and singers are increasingly facing a difficult choice between jails or seeking asylum. 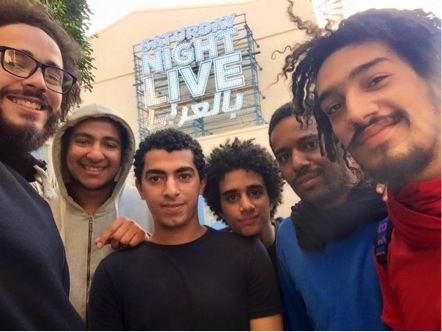 Atfal al-Shawarea band: the band which makes videos about social and political satire videos using their camera phones and uploads them to social media, was arrested by Egyptian security forces in early May. Source: Facebook.

The practice of persecuting artists is not an Egyptian flavor to authoritarianism; rather it is a practice present in the modern dictator’s handbook. From the Nazi persecution of “degenerate art,” through Chilean and Argentinian targeting of poets, and most recently Russia’s crackdown on Pussy Riot, it is clear that dictators dread independent art in its various forms, irrespective of time and geography.

The fear of artists stems from the very power of art. As dictators close public spaces for expressing discontent, people turn to art as a tool to express dissatisfaction. Art is a powerful tool in communicating messages of dissatisfaction in simple terms, regardless of dictatorships’ propaganda. Art is also useful as a means to deploy language that is embedded in the culture of the recipients, making it non-partisan, and able to cross ideological, religious or class boundaries within the society. Finally, dictators are unable to match the creativeness of independent artists.

Art in its various media forms translates long script into compact media, be it cartoon, videos, or plays. This process simplifies the logistics of dissent. As opponents to dictatorships are unable to voice their critique to match the scale of dictatorships’ propaganda through mass media, it is much easier to distribute cartoons or videos to a wider audience. Moreover, enjoying certain types of art does not require an ability to or even interest in reading long articles or listening to long speeches. Thanks to social media and technological advances, this task is becoming increasingly easier, as Facebook, YouTube, and Twitter are facilitating and lowering the cost of production and distribution of certain types of art to a wider audience.

In the Egyptian context, successive regimes closed public spaces to dissent, which left Egyptians with few venues other than satire and comedy to voice dissatisfaction. Before the penetration of the internet into Egyptian society, Egyptians were able to voice their dissent through jokes and dark comedy which mocked the State and politicians, while security forces could do nothing to detain the spread of this comedy. With the advent of the internet in Egypt, satire became more sophisticated, leading to the proliferation of satire through YouTube and cartoons. The most famous Egyptian satirist is Bassem Youssef. He started first through YouTube, and gained wide audience for his ability to combine social critique with comedy. He later went on TV, becoming the most widely viewed show in the entire Arab world, but two successive governments attempted to shut him down, until the current military regime threatened him and forced him to leave Egypt. However, others took up his mantle, including the Atfal al-Shawarea band and cartoonists like Andeel, through social media. 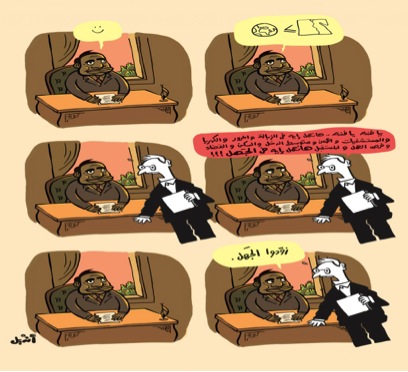 Assistant: “Sir! Sir! What are we going to do with the trash, the traffic, electricity, hospitals, security, wages, judiciary and the future?? What will we do with all the ignorance??!”
Sisi: “… Increase ignorance!”
One thing at a time
Andeel, Tuesday, August 19, 2014. Source: MadaMasr

An important pillar of dictatorships is the creation of a discourse regarding an alleged enemy from within, which serves to discredit opponents as enemies of the people. However, art is able to transcend this attempt to divide people. As dictators understand that it is quite challenging to close all public spaces, whether due to technology or a need to project a façade of openness, they discredit opponents by labeling them as opponents to the people, foreign agents, or traitors. Dictators can be very effective in doing so, as they enjoy wide audience penetration, through a monopoly of traditional media, including TV and print media. They can also discredit opponents’ discourses using these same channels. This creates an obstacle for opponents to challenge the regime, especially when using language that may not be appropriate to their cultures, as with human rights discourse and lacking the media to go in depth about their discourse.

Art however is able to bridge this gap, by deploying the same discourse, but on human rights or democratization through culturally appropriate terms. By making use of the cultural heritage of a society in order to argue for freedom or human rights, the message can transcend the boundaries dictators establish. In Burma, Artist Htein Lin was able to achieve this through his play “September”, as he bridged the Buddhist heritage of Burma and a call for democratization and human rights. It was a powerful message that is far more effective than protests or a thousand articles.

Finally, good art is by its nature founded on the ability to think freely, which creates a dilemma for dictatorships, which are built on the idea of control. Dictators can command their security forces to crush protestors, they can command journalists to write articles praising the ultimate wisdom of the dictator, and they can even control what is being fed to students in schools and universities. However, they cannot command artists to produce good and diverse art in support of their regimes. As a society develops its art, dictators cannot fully satisfy the need for diverse art, as the very existence of a dictatorship is inherently based on crushing diversity–it cannot be nurturing to art that is responsive to the diversity within the society. As such, attempts by dictatorships to compete culturally with opponents usually fall short. 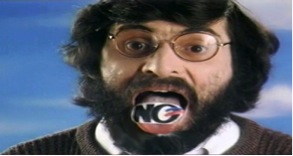 In Chile, as Pinochet’s regime began to comprehend the artistic appeal of the “No” campaign, it tried to satire the campaign through art, resulting in pathetic performances that served to show the government’s inefficiency and disconnection with its own people’s taste.