Why do Women Bear the Costs of Drug Policy?

There is nothing more erratic than a policy focused on persecuting the easily exchangeable parts of the drug trafficking market.

There is nothing more erratic than a policy focused on persecuting the easily exchangeable parts of the drug trafficking market.

There is nothing more erratic than a policy focused on persecuting the easily exchangeable parts of the drug trafficking market. It is a strategy of a futile battle that ignores the life conditions and reasons that motivate the decision of thousands of women to take part in these illegal chains. As the “war on drugs” was built upon racist, classist, and moralistic bases of 20th century societies, in the 21th century, drug policies maintain their prejudices regarding economically excluded populations.

The mistaken “war on drugs” led to the growing criminalization of women, who act as a weak link in the drug trafficking chain. An IDPC document concluded that this increase is not due only to the greater inclusion of women in the business, but also focused persecution of them, in which stereotypes of women criminals are reproduced.

In countries such as Nicaragua, Argentina, Mexico and Ecuador (See graphic, IDPC, p. 13) women imprisoned for drug-related offenses represent more than 70% of the total of all imprisoned women. However, the prison population in these countries is primarily men (on average 93%), which makes it difficult for States to design prison policies with a gender approach. These numbers are the depersonalized part of the bitter price many women involved in the drug trade pay for the minimum or non-existent benefits they obtained within it. This is one of many effects the war on drugs has on complex family contexts, where violence against women, poverty, and the lack of access to decent work conflate. 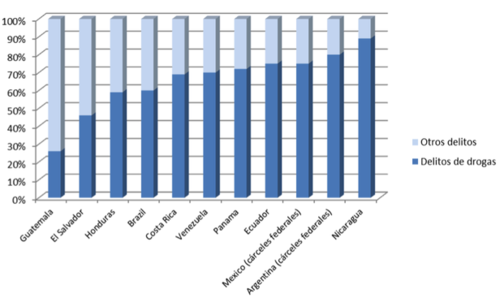 In 9 of the 11 countries in the study, the “war on drug” contributed the vast majority of incarcerated women, between 60 and 90% of all imprisoned women.

The situation in the United States indicates that two-thirds of women in federal prisons are imprisoned for nonviolent drug-related offenses. These numbers increase due to the figure of conspiracy, which allows authorities to apply draconian drug laws to the wives of micro-traffickers, as the women were “administrating” the resources of the trafficking. Additionally, date confirms not only the racial and ethnic bias of the criminal system, but also its violence against women. By December, 2013, the rate of imprisonment for white women was 50 per 100,000, while the rate for black women was double that.

In Argentina, the profile of women imprisoned for drugs indicates that the majority are women head of households, in poor areas, and in general foreigners. This means that the majority of women imprisoned in Argentina participated in the drug trade as drug mules, “accepting the risk of transporting substances in their bodies and luggage in exchange for the promise of thousands of dollars, which they generally never obtained.”

The Washington Office for Latin American Affairs (WOLA) has worked to make visible the consequences on women of the war on drugs. Stories such as those of Lidieth, Sara and Johana, imprisoned in Costa Rica, show how common it is to find women who were drawn to the business because they did not have resources to feed their children or pay rent; women heads of households that were forced through intimidation and threats, and even women with addictions who were paid for their work with the drugs upon which they depended.

Within the prison, the concern is not just the fact of being detained in a penitentiary, under a strict disciplinary system, in which no form of protest regarding the conditions of overcrowding, food, absence of basic services, etc. Is permitted, but also of being separated from their family, abandoning their children (man of whom are still adolescents), whom they must find after being released from prison after obtaining a benefit, which allows them to leave soon. If women in our societies are responsible for uniting the family, when she enters prison, her home disappears, along with her social circle, and her children are dispersed among family members of State institutions.

As women’s entry into drug trafficking is the lack of work or means for a dignified life, it is worth considering the situation of female poverty in the region. Data in general indicates a phenomenon known as the feminization of poverty, in which growing numbers of women confront adverse conditions to overcome this situation of economic violence.

According to the Regional Director of UN Women, Luiza Carvalho, although in Latin American countries, women now make up 55% of the workforce, it will take almost 75 years for them to make the same as men. This means that women’s empowerment is not only a question of participation in the labor market, but also a question of salary parity. The situation is even more concerning when one considers that for every 100 poor men, there are 117 women in the same condition. Additionally, 31% of poor women do not have their own income, and depend on their parents or husbands, according to a CEPAL report.

Thus, women carry a disproportionate cost of drug policies due to their position in our societies. Situations where conditions of vulnerability increase the probability of falling into trafficking networks. Situations such as being “naturally” responsible for caring for children, an increasing number of women-headed households (where in many men abandoned their obligations as co-provider of family income), inequality in the labor market, and the lack of interest of States in creating policies to overcome poverty using a gender specific approach.

Therefore, during discussions regarding alternatives to prohibition, we should consider the disastrous consequences of criminalizing women who act as easily exchangeable pieces in the illegal drug trade, to refocus state efforts from a perverse prohibition toward a paradigm that overcomes gender inequality. A good starting point would be a model of public police that achieves equal pay.