Why Venezuela is a dictatorship 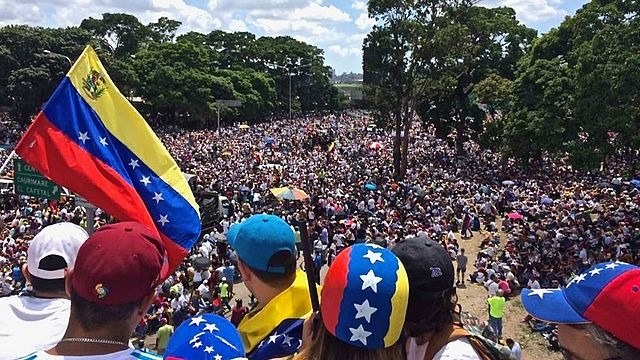 The dismantling of democracy can be incremental, like it was in Venezuela. First, there was the co-option of the courts, then the persecution of the political opposition, and last year, the suspension of regional elections. And now, with the Constituent Assembly, Maduro leapt into the dark.

The dismantling of democracy can be incremental, like it was in Venezuela. First, there was the co-option of the courts, then the persecution of the political opposition, and last year, the suspension of regional elections. And now, with the Constituent Assembly, Maduro leapt into the dark.

“Democracy is like a train”, declared Turkish President Tayyip Erdoğan. “You get off once you have reached your destination.” And that is exactly what Erdoğan did last April, when he consolidated all government powers unto himself through a fraudulent constitutional reform, approved by a referendum that was as rigged as it was divided.

Today, international democratic sectors, including left-wing ones, openly call Erdoğan, a hard right politician, a dictator. Why then do some resist doing the same with Venezuela, even as it is now ruled by an all-powerful and fraudulent Constituent Assembly? In addition to the political and moral selectivity of some left-wing sectors (as well as right-wing ones) in criticizing governments falling on the same side of the political spectrum, I believe that behind this dissonance is a conceptual and empirical question: When do we know when a democracy stops being one?

In general terms, political scientists have given two answers. The most commonly used indexes, like Polity IV, take into account several factors to determine how democratic a country is: free elections, Congress and independent courts’ oversight, human rights protection, etc. This nuanced conceptualization has several advantages, among them not being black and white: the distinction is not only drawn between democracies and dictatorships, but between degrees of democracy and authoritarianism. From this viewpoint, the dismantling of democracy can be incremental, like it was in Venezuela. First, there was the co-option of the courts, then the persecution of the political opposition, and last year, the suspension of regional elections to preempt Maduro’s defeat. After this last event, independent scholars and civil society organizations in Venezuela like Provea, rightly declared that the government had ceased to be democratic. What happened this year—the attempt to dissolve parliament and now the creation of the Constituent Assembly—are confirmation that Venezuela is an autocratic regime.

Other political scientists, like Adam Przeworski, argue that the definitive feature of democracies is free and transparent elections that allow for alternation in government. Although minimalist, this notion enables a categorical and straightforward determination of whether a country is a democracy or a dictatorship.

Even using this less demanding definition of democracy, Venezuela is now a dictatorship. The Constituent Assembly was put together not through an open vote, but in a manner designed to secure wide majorities in favor of Maduro. The election cannot be considered free: critics were intimidated, protestors were brought before military tribunals, and public officials were forced to vote for Maduro, all of which resulted in a single-party assembly with unlimited powers. And now, the same company that counted the votes in all the elections under Chavista governments since 2004, has denounced that last week’s vote results were inflated by the government.

If democracy is to have any meaning, then we must conclude and say that Venezuela is not one. The Maduro government got off that train last year, and last Sunday, it leapt into the dark.