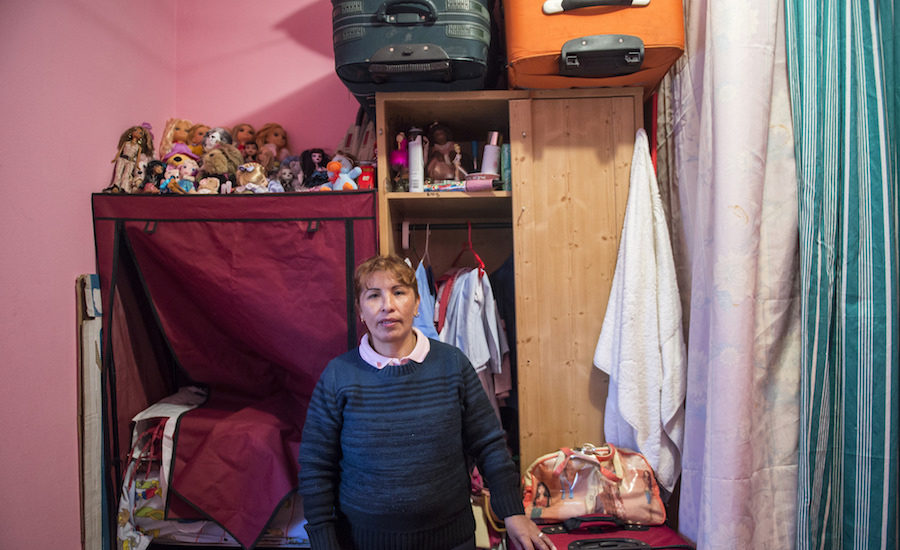 Understanding the reasons why certain women from certain regions end up doing certain work opens the door for critically approaching the fact that the majority of domestic workers are migrants in precarious situations.

Understanding the reasons why certain women from certain regions end up doing certain work opens the door for critically approaching the fact that the majority of domestic workers are migrants in precarious situations.

Eulalia is Ecuadorian and has lived in Spain for three years. She does live-in domestic work and cares for an elderly couple. She migrated out of the need to support her parents and granddaughter; however, she was only able to see her mother once before she passed away. Eulalia says she’s been gone long enough from her family and wants to return to Ecuador.

Norma is from Paraguay and has been working for nine years as a domestic worker in Spain. She sees herself as an “eternal migrant,” as she has worked for the last 20 years outside of her country, aways in some kind of caregiving. Like Eulalia, she traveled seeking new work opportunities to support her family. For the last six years she has lived in the same house as her employers.

Martha is 48 years old and has spent six years living on the outskirts of Madrid. She works caring for the children of a Spanish family. She has worked as a domestic employee, always live-in, in Germany and Spain. She says that not long ago her visa expired, so her migration status is now irregular. That’s why she hasn’t returned to Colombia, her country of origin. According to her, European families “see us as very caring people,” and for that, prefer to have Latina women care for their children. 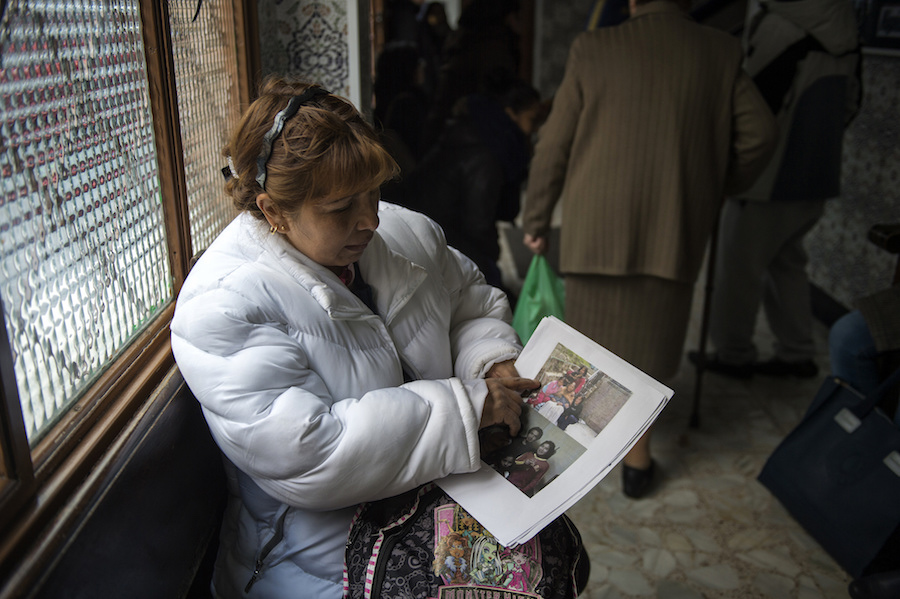 These three stories are the centerpiece of a documentary produced by the Network of Latin American and Caribbean Women in Spain (la Red de Mujeres Latinoamericanas y del Caribe en España). The documentary depicts, through the life paths of Eulalia, Norma and Martha, the common conditions that affect domestic migrant workers. The three protagonists traveled from Latin American countries to Europe. All three left their families in their home countries. All three are live-in workers, which means they live in the same space as their employers. All three want to return to their countries.

How can we explain these shared experiences? What factors are behind these three journeys? The complicated relationship between migration flows and hospitality care was first highlighted by the sociologist Arlie Hochschild under the name global care chains, a series of global connections based on increasing demand in the Global North and the precarious economic situation of women in the Global South. For Hochschild, a typical example of a global care chain looks like this: a woman from Asia or Latin America decides to migrate to a European country to work in domestic services, as she wants to provide for a better future for her family. This migration generates, in turn, a deficit of care in countries in the Global South, particularly on families of migrant women. This scarcity generally manifests itself in the unpaid labor of other women, usually girls, teenagers, or older women from the same family or social group. Eulalia, Norma, and Martha, in leaving their families in their home countries, become the first link in the care chain that is formed by them and by the other women who now care for their children, their parents, or the people they would usually look after. 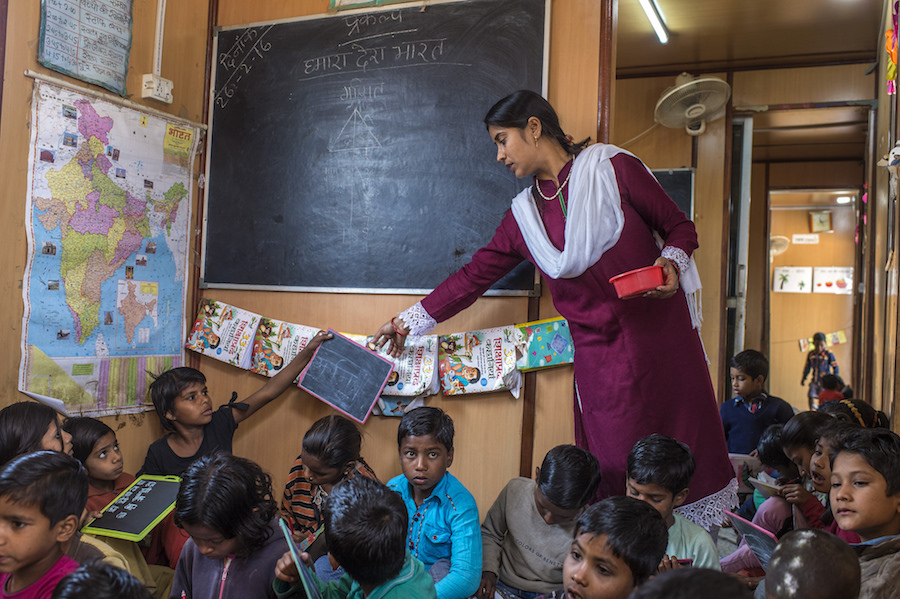 Many migrant women have to leave the responsibility of caring for their children in order to work. In Delhi, India, an NGO offers mobile childcare to help such women. Source: Overseas Development Institute, Flickr (CC BY-NC 2.0).

While the concept of global care chains was coined to describe South-North interchanges, these flows can adopt other dynamics: they can also develop between countries within the Global South, or between rural and urban contexts. In these different scenarios, however, the care chains have one common condition: they are feminized phenomena. As feminism has been saying for more than a century, the division of labor is not just a question of class, but also a question of gender. For this reason, domestic labor and caretaking tend to be attributed to women, girls, and feminized subjects.

But why talk about care chains? What’s so important about this idea? Care chains help us to understand the way in which migratory exoduses (whose causes are diverse and can be anywhere from poverty to security) support a gendered division of labor transnationally (in the case of global migration) and nationally (in the case of local migration). More than a third of migrants, at least in Latin America and the Caribbean, are domestic workers who work informally, without a fair salary, and are victims of economic, physical, and psychological violence. The problem, therefore, is not that migrants work as caretakers; in fact, many feminist fights have sought to recognize this as dignified work when given sufficient labor guarantees. The problem is that it is their only alternative in a world that still looks down upon this labor.

Some—like Eulalia, Norma, and Martha, for example—must work as “live-in” employees, blurring the line between work and private life. Live-in domestic employees work as much as 18 hours per day for an insufficient salary. In one part of the documentary, Eulalia says it clearly: “you’re there for the whole day, always available for them.” This limits any possibility of having an intimate and personal life, as it subjects the behaviours and expressions of women to the vigilance of their employers. Even those who don’t work as live-in employees suffer negative consequences: the majority live on the outskirts of large cities and spend close to 20% of their salary in transportation. Because of urban segregation, they must use various routes to arrive to where they work. 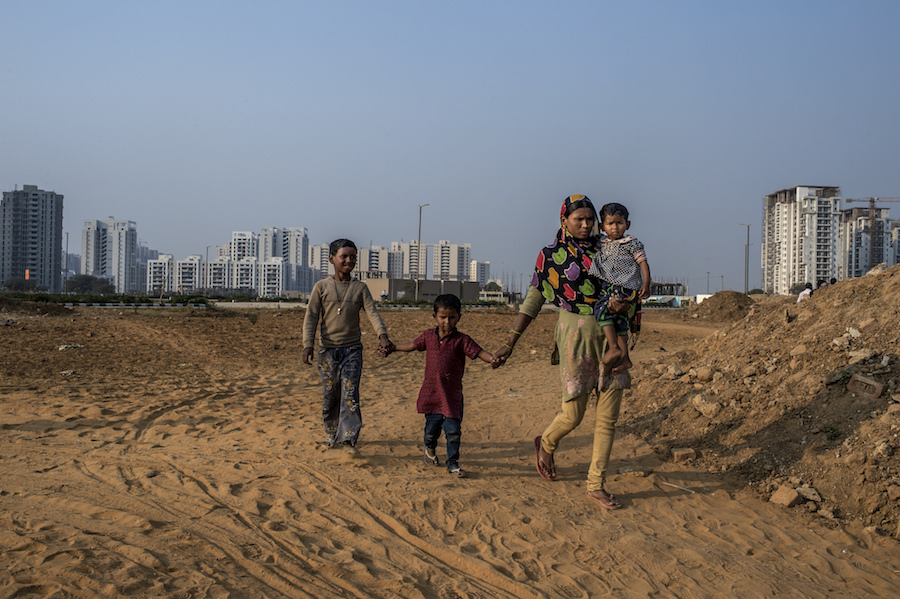 Rubina, from the state of Bihar, migrated to Delhi, India. She is one of many women who brings her children to the mobile childcare. Source: Overseas Development Institute, Flickr (CC BY-NC 2.0).

These consequences vary and develop further complexities and implications depending on the context in which the care chain develops. Researchers Camila Esguerra and Friedrike Fleischer, for example, found that in Colombia women are immersed in care chains not only because of the high demand in urban areas or countries in the Global North, but also as a result of the internal armed conflict. Due to the multiple effects of the war, women have had to flee their territories, most ending up displaced in urban centers. No matter what they worked in before, the majority of these women find only one path forward: working in domestic services and subjecting themselves to a precarious salary for many hours of work. While Colombia has a legal framework that guarantees labor rights to domestic workers, official numbers show that 85% of domestic workers remain within the informal economy (this number could be higher due to underreporting). Those that enter this informal labor market must turn to neighbors, women in their families, or to the Community Homes of the Family Wellbeing program (Bienestar Familiar) to care for their children, parents, or older relatives.

Cases like Colombia illustrate the implications of global care chains for women in the Global South, from rural environments, or from ethnic-racial groups. They show us that care chains are not only characterized by the gendered division of labor, but also by a racial division. According to Esguerra and Fleischer, the racial order established in the region generates disproportionate effects on the experiences of afro, indigenous, and rural women who, facing displacement and discrimination, only have access to poorly compensated work as caretakers. The consequence, then, is that these women end up being considered natural for this kind of work in urban centers. 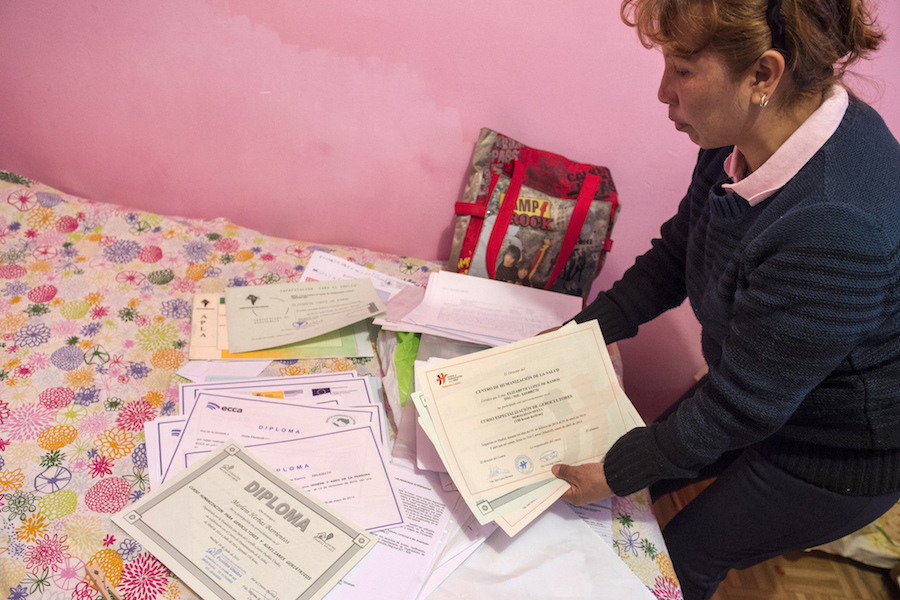 Elizabeth shows her certifications. She hopes to earn a better job, but as of yet she hasn’t been able to. Source: Overseas Development Institute, Flickr (CC BY-NC 2.0).

Understanding such dynamics, then, is important because it moves us away from normalizing migrant women as caregivers par excellence. Understanding the reasons why certain women from certain regions end up doing certain work opens the door for critically approaching the fact that the majority of domestic workers are migrants in precarious situations. It allows us, for example, to problematize the fact that various classified ad sections in Colombia have announcements like, “Live-in Venezuelan Needed” or “Looking for a Venezuelan Woman for Live-In Work,” which has occurred recently as a result of the Venezuelan exodus to other South American countries. It helps us, in other words, to not accept labor exploitation as a response to the vulnerability of migrants.

Finally, care chains are a useful concept because they bring us closer to the broader question of the contribution of women to economic development. On occasion we forget that many men and women are able to go work because there are other women that clean their home, care for their children, and cook for them. We also forget that this is not always a labor based in love, affection, or care, but is strenuous, exhausting, and thankless. In 2016, activist and domestic worker Rafaela Pimentel gave a talk where she forcefully stated: “without us, the world would not turn—at least, not your world.” Pimentel’s message is clear. The world—above all, an urban, “developed,” Global North world—would not function without these women; and yet, their work remains invisible, is taken for granted, and is not recognized or paid as it deserves.