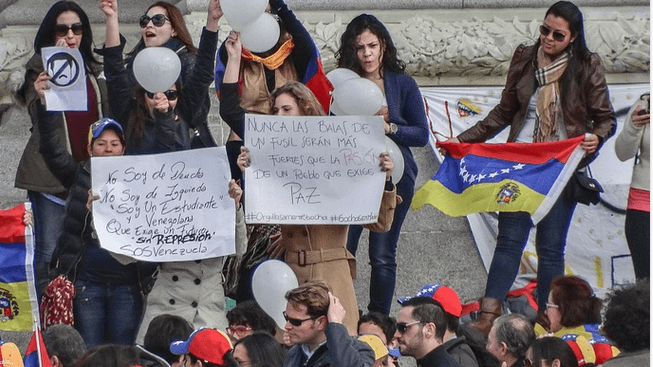 Crisis in Venezuela: Why isn’t this just another protest?

“50 deaths in 50 days of protests in Venezuela,” was the headline of several international outlets on Saturday, May 20th. The statistic was accompanied by other equally shocking data: the national manifestations against Nicolás Maduro’s government, the attacks on democracy, and the expansion of poverty have left behind 13,050 injured and 2,459 detained. Despite this scenario, Venezuelans took again to the streets on Monday. This time, to claim their right to health in a country where the government declared a “scarcity of medicines” at the end of March.

“Despite the increase in cruelty and repression, people remain in the street and every day, through a snowball effect, new people join this process,” said Rafael Uzcátegui–general coordinator of Provea–last week in Bogotá. Dejusticia invited Uzcátegui and Marino Alvarado, ex-coordinator of the NGO and current member of the board of directors, to visit Colombia and have a dialogue and exchange with Dejusticia and other Colombian civil society on the worst economic and political crisis in the recent history of the country.

Last October, Provea declared publicly that Venezuela is under a modern dictatorship. The country is ruled by a democratically elected government that gradually co-opted the State institutions until obtaining full control, making true democracy an ever more distant reality. Perhaps the clearest beginning of this process was the parliamentary 2015 elections, where the opposition made some gains and Maduro’s government, in the words of Rafael Uzcátegui, “took the decision to promote a model that would no longer need popular support.”

The approval of the Decree on the State of Exception and Economic Emergency on May 2016 took away powers from the General Assembly and gave them to the president in the name of the economic crisis. Following this, the government delayed regional elections until the end of October of the same year. And then, only a few days later, the final act to dismantle democracy arrived: the suspension of the referendum to revoke president Maduro. That day, Provea points out, Venezuela openly became a dictatorship.

As a response to all of this, protests emerged in the last two months. Uzcátegui and Alvarado refer to them as “the first popular rebellion of the 21st century,” a movement of social indignation that, for first time in the recent history of the country, united different Venezuelan social classes, the young and the elderly, and the residents of urban and rural areas. Provea estimates that 1,200,000 people have taken to the streets in the 24 states of the country to protest the economic crisis, to ask that the delayed elections take place, to demand that the powers of the National Assembly are respected, and to reject the oppression that has already left 50 deaths. Asking, in other words, for the return to democracy and respect for dignity.

“There is a current practice that falls under a dictatorship – says Marino Alvarado–. The same national security doctrine that dictatorships in the Southern Cone applied, which saw in every communist an enemy that the government had to face and defeat in any way, has been consolidated in Venezuela. And that implies serious human rights violations.

In those violations, the military forces are playing a key role. Alvarado explains it this way: today Venezuela’s militarization is greater that when Hugo Chávez, who came from the military, ruled the country. Sectors of military forces do not only have political, but also economic power in so far as they have been the beneficiaries of companies exclusively managed by them.

And what role has Colombia played in this crisis? Dejusticia’s director César Rodríguez Garavito calls attention to the silence that has reigned. “In the face of the silence of progressive sectors, even of some human rights actors, right-wing political sectors in Colombia, often guided by political opportunism, have unfortunately captured the discursive spaces and complaints of what is happening in Venezuela.” At the same time, Rodríguez calls attention to the indifference of some Latin American countries and human rights sectors. This indifference is displayed even by some actors who at other points in history were the recipients of solidarity from Venezuelan civil society, which accepted and protected them against human rights violations in their countries like the ones citizens and activists in Venezuela face today.

Provea insists on the power of citizen mobilization and on the need for those who are outraged to keep taking to the streets and engaging in peaceful protest despite the government-led violence and repression. Dejusticia and the Latin American and Colombian civil society will remain alert and in solidarity with the demands in favor of democracy and human rights in Venezuela.