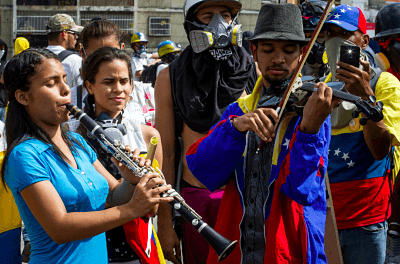 At the Defenders’ Days, during the international conference of human rights defenders organized by Civil Rights Defenders in Sweden, Dejusticia has launched the edited volume Rising to the Populist Challenge: A New Playbook for Human Rights Actors.

Edited by César Rodríguez-Garavito and Krizna Gomez, this book collects and analyzes a repertoire of responses by human rights organizations to the growing crackdown against civil society in different countries around the world that are experiencing populist moments.

“Populist leaders seem to have been learning from each other in terms of the tactics that they use in delegitimizing and attacking human rights actors. The tools they use are so similar—from Russia to India, and from Venezuela to Hungary—that one cannot help but think that there must be a playbook for the populists of the world. But what is the playbook by human rights actors in counteracting these attacks?” says co-editor and Dejusticia executive director César Rodríguez-Garavito.

According to co-editor Krizna Gomez, “When one’s human rights organization gets branded as terrorist, or its funding is cut, or its members are jailed, the first thing that gets out the door is one’s reflexivity, calm calculation, and the ability to anticipate threats and respond to them effectively. This book is a statement that human rights actors need not be ad hoc in their response to threats against their important work, because many have undertaken effective responses even in the gravest contexts. We just need to learn about them.”

Written by 17 prominent scholars and advocates in challenging political settings from around the world, the book thus offers ideas and inspiration to their peers in the human rights community who are grappling with and resisting the erosion of democracy and rights. From meticulous documentation of abuses in Turkey to more grassroots forms of social networking in Hungary, from peace caravans in India to finding new ways of being useful under 21st century dictatorships in Venezuela, like war correspondents reporting from the trenches, its authors step forward to share their own continuing struggles to help their communities.

This book was produced within the partnership between Dejusticia and the Watson Institute of International Affairs at Brown University under the program “Re-Examining Global Policy Agendas via Interactive, South-Initiated North–South Dialogues.”

Everything You Need to Know About the Colombian Peace Process

Prison is not the only sanction in transitional justice mechanisms

New article by our Director on reimagining human rights