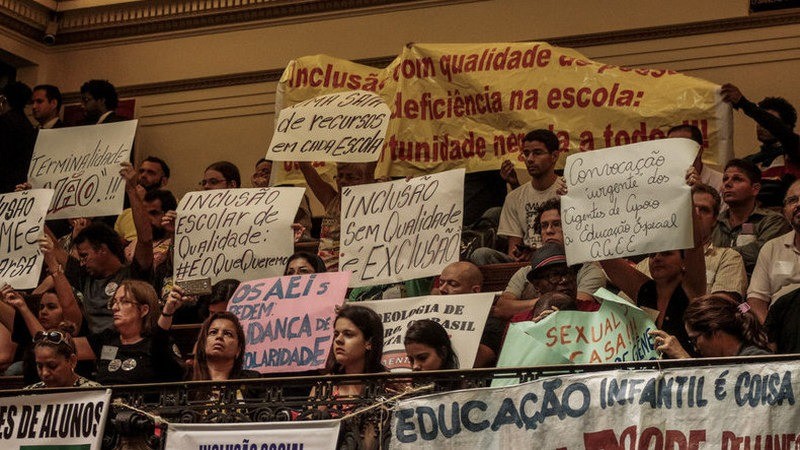 “Do not mess with my kids: No to gender ideology”

Leaders of Christian churches, conservative sectors, and parents worried about the influence of the State on their children’s sexual education have taken to the streets to defend traditional family values across Latin America.

On September 10th, 2016, parents in different Mexican states took to the streets to oppose a government’s initiative that promoted the legalization on same-sex marriage. With phrases like “God created a man and a woman. No to gender ideology” or “Without family there is no homeland,” the Mexicans that marched showed their concern regarding the consequences that the government’s initiative would have on families and on children’s education. What they were worried about, many said, was that the “traditional” family model composed by a man, a woman, and children would break down. They accused “gender ideology” of questioning the gender roles that men and women had traditionally fulfilled, while promoting homosexuality in children.

From these mobilizations, a new proposal for creating a “Latin American front for the right to life and family” emerged, an initiative that has resonated in several Latin American countries and has been inspired by several protests against the progress that has been achieved on LGBTI and women’s rights in recent years – such as the right to abortion, patrimonial rights, or adoption by same-sex couples. What is worrying about this landscape is that while these initiatives against “gender ideology” are strengthened through transnational networks, systemic violence against women and LGBTI communities that do not fulfill traditional gender roles continues and even increases. Thus, now that we most need to question traditional gender roles and the violence that they entail is when we witness how groups that seek to maintain and reinforce the status quo–one that has systematically violated the bodies and lives of women and people with diverse gender orientations and identifies–become stronger.

Mexico’s case is not isolated: In Colombia, on August 10th, 2016, parents in different Colombian cities also marched to oppose the inclusion of “gender ideology” in schools curricula. The controversy that led to the protests followed after the Ministry of Education disseminated sexual education brochures that sought to include a gender equality approach, in accordance with the Constitutional Court, to promote a non-discriminatory education that fully respects students’ sexual identity and orientation. A representative of Santander (a department in Colombia), Ángela Hernández, who also attended the march in Mexico, brought together those who opposed the Ministry of Education’s proposal around the self-defined movement “family champions.” One of the posters of the Colombian march in favor of traditional family values.

Leaders of Christian churches, conservative sectors, and parents worried about the influence of the State on their children’s sexual education took to the streets to defend traditional family values. Using the phrase: “Do not mess with my kids” those who opposed the brochures affirmed that the “gender ideology” within the sexual education plan of the Ministry was going to destroy the family and promote homosexuality in children. Months after, the same movement marched, accusing the Peace Agreement between the Colombian government and the FARC guerillas of promoting “gender ideology” and thus, of being potentially dangerous for Colombian families.

On March 4th, 2017, Peru also screamed “Do not mess with my kids.” Religious sectors, conservatives, and parents worried about the education of their children took to the streets of several cities to show their disapproval of the sexual education program that the Ministry of Education was promoting with the goal of advocating gender equality in schools. Some of the phrases that were heard during the march included: “Gender ideology will not work,” “The government wants to homosexualize children,” and “Minister, do not make my kids homosexual.” In a speech given in the middle of a crowded plaza, Phillip Butters, thought leader and Peruvian radio commentator, asked for the dismissal of the education Minister, Marilú Martens, under the argument that the Ministry’s proposal was an attack on traditional values since it shed a positive light on trans and homosexual people who, in the eyes of Butters, suffer from serious psychological issues.

In Brazil, the panorama is quite similar: In 2015, the Local Manaus Chamber approved a law that prohibits the inclusion of gender ideology in local schools. Marcel Alexandre, who has led the project and is member of the Brazilian Democratic Movement Party, celebrated the enactment of the law and affirmed that it constituted a victory for families since for him, gender ideology seeks to indoctrinate children by promoting a culture of homosexuality. Similarly, in January 2017, the mayor of Ariqueme in Brazil led a project that sought to eliminate “gender ideology” from educational texts by pointing out that sexual education was the responsibility of parents and not of schools or the Ministry of Education. What is most worrisome about al these initiatives is that they have emerged in contexts where gender-based crimes are frequent: in Colombia, only in 2016, there were 731 registered feminicides, with an average of 2.4 women murdered every day for being women. In Peru, according to the Observatory on Criminality of the Public Ministry, in the last eight years, 946 women have been murdered for being women. And in Brazil, according to statistics by the Office for Women’s Policy, approximately 4,762 women were murdered in 2013 for gender-related violations. In a similar fashion, all four countries have suffered the consequences of human rights violations as a result of internal armed conflicts or dictatorships. which have evidenced how violence operates differently on men and women based on gender.

These countries are also places where, as recognized by the Inter-American Court on Human Rights (IACHR), acts of violence against LGBTI people or those perceived to be so, have increased. Furthermore, the stigmatization and marginalization that they face hinder these groups’ access to social, economic, and cultural rights. On this matter, the situation of trans women is particularly concerning: according to statistics by the IACHR, the life expectancy of these women in countries in the Americas oscillates between 20 and 25 years, an alarming number that reflects how stigmatization prevents trans women from accessing the health system, education, and employment. Similarly, trans women tend to take jobs in prostitution, in many cases, under precarious conditions that make them vulnerable to police and sexual violence.

This context shows us the importance of developing policies destined to create empathetic citizens that do not perpetuate patterns of discrimination and stigmatization. Nonetheless, the strengthening of massive and transnational movements that march in favor of openly homophobic, transphobic, and sexist causes puts this objective at risk. Thus, it is urgent to mobilize educational projects–even transnational ones–that question the myths and lies that surround the issue of gender, respond to the many worries that parents who attend these protests have, and make many describe gender as an “ideology.” In reality, the purpose of a gender perspective is to explain how gender is a vital experience in constructing our identity, how this construction is in many instances shaped by violence and an unequal distribution of resources and power, and how to think about strategies so men and women can relate with each other in more egalitarian and fair ways. This, more than a threat, is a promise to create a more just society where no one is murdered or the victim of violence for having a different gender identity or orientation.