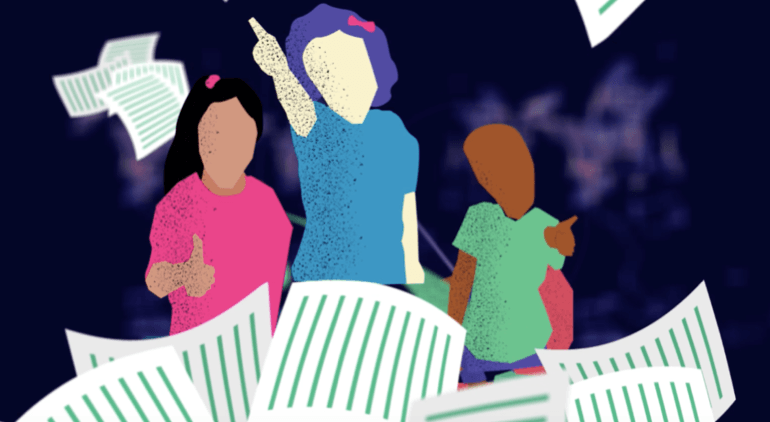 Deforestation in the Colombian Amazon (the most biodiverse region in the world) violates the right of colombian children and youth to enjoy a healthy environment. Given that all ecosystems are interconnected, deforestation in the Amazon not only affects those living in the region, but also elsewhere in Colombia.

At the 2015 climate change negotiations, Colombia reaffirmed its commitment to reach zero-net deforestation in the Colombian Amazon by the year 2020. Two years before the deadline, the government has yet to develop significant and effective actions to stop deforestation.

The problem is that cutting down the rainforest does not only contribute to climate change-related impacts such as melting of glaciers, temperature increase and the spread of vector-borne diseases, but also alters the water cycle. This in turn generates a serious threat of floods, droughts, landslides, food shortages, crop loss and affects rainfall patterns.

Deforestation in the Colombian Amazon (the most biodiverse region in the world) violates the right of colombian children and youth to enjoy a healthy environment. Given that all ecosystems are interconnected, deforestation in the Amazon not only affects those living in the region, but also elsewhere in Colombia. In turn, the violation of the right to enjoy a healthy environment threatens the rights to life, health, food and water of  young people today who will face as adults the future climate change scenarios predicted by the Institute of Hydrology, Meteorology and Environmental Studies (IDEAM). Current research indicates that between 2041-2070, the average temperature in Colombia will increase 1.6 °C.

2. What are youth doing in response?

A group of 25 plaintiffs are filing a legal action before the Superior Tribunal of Bogotá, with the support of Dejusticia, to protect the fundamental rights to life, health, food, water and a healthy environment of future generations.  The are filing a tutela, a special legal figure under the Colombian Constitution to protect individual rights.

They claim that the Government’s failure to reduce deforestation and ensure that the competent authorities comply with the commitment to reach zero-net deforestation in the Colombian Amazon by the year 2020 (as agreed under the Paris Agreement and the National Development Plan 2014-2018) is threatening their fundamental rights.

3. Who are the plaintiffs and why are they part of “Future generations”?

The plaintiffs of this legal action are boys, girls, teenagers and young adults. They are between 7 and 26 years old. with an average life expectancy of 78 years (75 years for men and 80 years for women). This mean that the plaintiffs will develop most of their adult lives in the period between 2041-2070, and part of their old age after that time. During this period, the annual temperature of the country is expected to gradually increase by 1.6 °C. For the period 2071-2100 the average annual temperature could gradually increase by 2. 14 °C.

As a result, the youth filing this tutela share a collective reality: they are the generation that will face the greatest climate-related impacts. In addition, 17 cities and municipalities where the plaintiffs live are highly vulnerable to climate change: Arauca, Cali, Palmira, Buenaventura, Cartagena de Indias, Cubarral, Florence, Floridablanca, Manizales, Envigado, Itagüí, Neiva, Quibdó, San Andrés and Providencia , Bogotá, La Calera and Leticia.

4. Why are they filing the lawsuit now?

Today, the situation is more dire than ever. According to a report published by the Institute of Hydrology, Meteorology and Environmental Studies (IDEAM), the deforestation rate in the Colombian Amazon skyrocketed in 2016 compared to 2015. The reason behind this trend is that areas previously difficult to access, especially because of the armed conflict, are now beginning to be colonized. For each day that the government fails to fulfill its obligations, 392 hectares of forest (approximately 16.3 hectares per hour) are deforested.

5. Has something similar been done before?

Yes, in countries like the United States and the Netherlands a group of young people filed legal actions to demand the protection of their rights as future generations in the face of climate change. In Colombia and Latin America, this will be the first.

Dejusticia is a Colombia-based research and advocacy organization dedicated to the strengthening of the rule of law and the promotion of social justice and human rights in Colombia and the Global South.

We promote positive social change by producing rigorous studies and fact-based policy proposals; carrying out effective advocacy campaigns or litigating in the most impactful forums; and designing and delivering education and capacity-building programs.

At Dejusticia, we believe that academic work can be committed to social justice and can contribute to effect change, and we have an “amphibious” approach to our work.

Dejusticia is a non-governmental organization and does not belong to any political party. One of the research issues we focus on is “environmental justice,” which focuses on action-research on climate change, land use planning and environmental participation.

Dejusticia supported the plaintiffs of the tutela with the legal component and structuring of the document.

7. What are the main arguments in the lawsuit?

This is a tutela action, a special mechanism created under the Colombian Constitution for individuals to demand the protection of their fundamental rights. Through this lawsuit, the plaintiffs are claiming that the Colombian government and the competent authorities are failing to fulfill their duty to protect the environment. No individual is being sued and there are no political or private interests in this litigation. In addition, it is important to keep in mind that the argument presented in the document have broad scientific support.

Specifically, the lawsuit is demanding the protection of the fundamental rights of future generations. These rights include: the right to a dignified life (articles 1 and 11, Political Constitution, hereinafter CP), to health (art.49, PC), to food (arts. 1 and 65, CP) and to water (Article 95, CP).

The plaintiffs argue that current deforestation rates and the government’s failure to act are violating their right to enjoy a healthy environment (Article 79, CP). The destruction of the Colombian Amazon is not only having impacts on national ecosystems, but is also increasing greenhouse gas emissions, and thus, exacerbating climate change.

The rise in greenhouse gas emissions as a result of deforestation is fueling climate change, threatening a) the life of the plaintiffs and b) the possibilities of developing a life plan, since climate change will have an impact on the temperature and rainfall of the places where they live.

Deforestation in the Amazon is decreasing the amount of rainfall, affecting the water supply. This is forcing many communities to store water and when done so inadequately, it can risk public health by helping the spread vector-borne diseases such as dengue, chikungunya and zika. Furthermore, an increase in average temperatures allow many of these same vectors to spread to areas where they were not common before, threatening public health.

Deforestation and its role in amplifying climate change threaten the food supply because they affect natural ecosystem dynamics. In turn, this can result in food shortages and crop loss. Approximately 81% of departments will face impacts in the agricultural sector, while 47% will face impact in the livestock sector. This is worrisome because it threatens not only the farmers and producers, but all those populations that depend on these product for food. Thus, food availability in the country will be potentially reduced.

Deforestation threatens water accessibility to water because climate change will reduce rainfall volume by 27% across the national territory. It will also undermine affordability because a decrease in water supply threatens to leave the populations that depend on river transport isolated. Finally, deforestation threatens the very own ecosystem that produces water, since 50% of the rain that falls in the Colombian Amazon is recycled rain and thus, is linked to other ecosystems in the country.

8. What are the plaintiffs asking?

Two fights in one: feminism and environmentalism