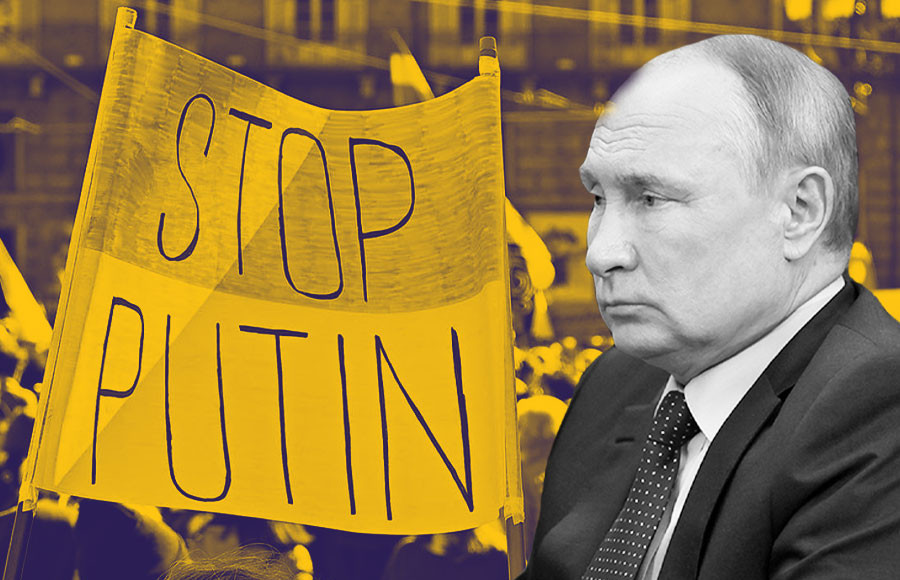 Since the beginning of the invasion, Putin’s government has ordered the arrest of over 13,800 protesters. | EFE

As INCLO members, we raise our collective voice to condemn Russia’s invasion of Ukraine, its violation of international law, and the war crimes and human rights violations being committed against the people in Ukraine.

As INCLO members, we raise our collective voice to condemn Russia’s invasion of Ukraine, its violation of international law, and the war crimes and human rights violations being committed against the people in Ukraine. In these urgent times, we believe that protecting the Ukrainian civilian population and ensuring that evacuation routes are kept open is of supreme importance.

Russia’s invasion of a sovereign state’s territory violates fundamental principles of international law and qualifies under the criteria of aggression as a fundamental offense against international criminal law. The escalation of violence since the start of the invasion has yielded profuse evidence of alleged war crimes committed against Ukrainian civilians. We insist that international human rights law and international humanitarian law still stand throughout the entirety of the Ukrainian territory, occupied or not. We are also extremely concerned for the more than 3 million refugees that have fled Ukraine. We call on the international community to double its efforts to stop this war and to use all means at its disposal to assist Ukraine in its reconstruction.

We are also alarmed by Russia’s fierce repression against dissent, protest, independent journalism and internet access. Since the beginning of the invasion, Putin’s government has ordered the arrest of over 13,800 protesters. Moscow has also banned Facebook, Instagram and Twitter and restricted access to overseas Tik Tok accounts. Independent media has been blocked with journalists fleeing the country to avoid prosecution and new legislation was put in place to punish the use of the term ”war” with up to 15 years in prison. Foreign mainstream media has been muffled and certain contents of BBC Russia and Deutsche Welle have become unavailable, while local media must choose between censorship or closing. Internet access must be guaranteed in Ukraine and Russia for violations to be documented and information to circulate. Russian INCLO member organization Agora is currently involved in the legal defense of anti-war protesters, journalists and citizens prosecuted for posting content deemed critical of the government on social media. It also provides psychological support and assistance to people in Russia and Russian refugees abroad.

Preventing public assembly and prohibiting people from voicing their opinion amounts to violations of basic rights guaranteed by Russian law and by the international human rights treaties signed by Russia. As expressed by the UN Special Rapporteur on the rights to freedom of peaceful assembly and association Clément Voule, “respect for rights to freedom of association, assembly, expression and participation, as well as a free press and an enabling environment for NGOs, are essential conditions for peace and to end conflict”.