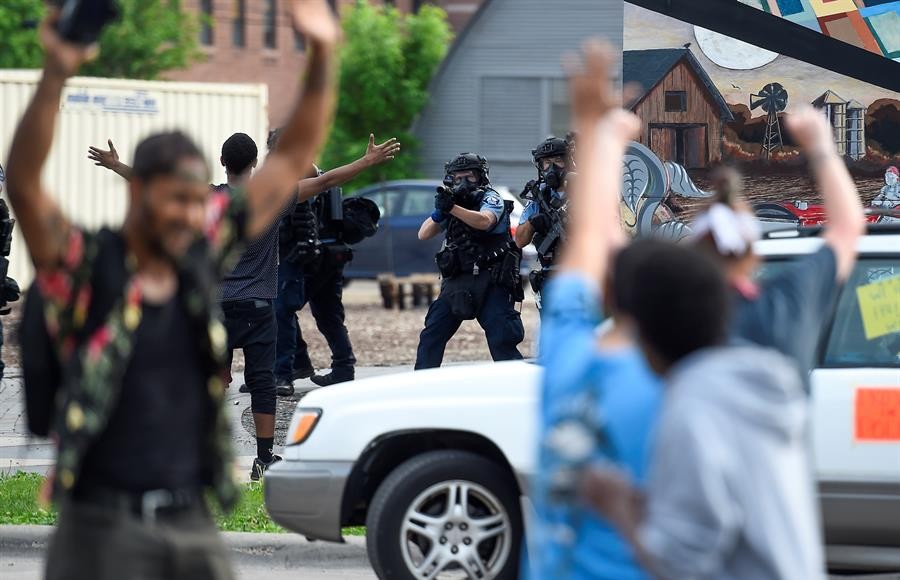 INCLO calls for accountability for the killing of George Floyd. Holding these officers accountable is the bare minimum needed to show that the American legal system recognizes that Black lives actually matter. | Photo by Craig Lassig for EFE

Fourteen members of the International Network of Civil Liberties Organizations (INCLO) express deep concern over the escalation in police responses to protests in the USA over the past week. The protests erupted in response to the killing of George Floyd by police officers in Minneapolis on Monday. INCLO condemns the disproportionate use of force against protesters and calls on police to act in accordance with international standards on the use of force and the management of assemblies

News media reports indicate that rubber bullets, tear gas and in some cases live ammunition have been used by police officers against protesters, in violation of the basic human rights to protest and freedom of expression. INCLO notes with particular concern the endorsement of the use of violence by President Trump on social media. INCLO supports the ACLU’s call to the National Guard and police in Minneapolis and elsewhere to comply with the law and not President Trump’s sentiments on social media.

News media reports that seven people were struck by gunfire at a protest in Louisiana. In Ohio, pepper spray was used on large crowds. Reports by journalists on social media indicate that rubber bullets were used in Phoenix.

Joint research conducted by INCLO member organizations indicate that more than 70% of the 1,925 documented cases of injuries caused by kinetic impact projectiles (like rubber bullets and pellet rounds) over a period of 25 years resulted in permanent vision loss, blunt injuries to the brain, sprain, bruises and fractures. The research highlights that injuries and death are more common when these weapons are misused — fired from close range, targeting the head and face, or used excessively and indiscriminately.

In order to protect the life and health of protesters and passersby, INCLO calls on police in the USA to adopt clear regulations on the use of force and less-lethal weapons in the context of protest which conform with the recent UN Guidance on Less Lethal Weapons.

It is well established that the use of violence by some protesters does not suspend the right to protest of all those gathered and it doesn’t provide a license to escalate police responses and use of excessive or deadly force. The police response must always be lawful and seek to de-escalate the situation rather than inflame it by resorting to life-threatening weapons.

In addition, INCLO calls for accountability for the killing of George Floyd. Holding these officers accountable is the bare minimum needed to show that the American legal system recognizes that Black lives actually matter. The next step must be bold changes that address the racism at the root of United States policing institutions.

Furthermore, INCLO calls for credible and independent investigation into the misuse of less-lethal weapons by police against protesters around the United States. Importantly, and to the extent that they do not yet exist, independent accountability mechanisms need to be urgently established to ensure that excessive use of force and the misuse and overuse of less lethal weapons during the ongoing protests are fully investigated and prosecuted.

INCLO also notes with grave concern that journalists from CNN were arrested in Minneapolis earlier today while covering the protests. This is an attack on freedom of the press and expression. INCLO is also concerned at reports that the decision to arrest a reporter may have included elements of racial discrimination, given that there are allegations of differential treatment of two staff members who were both clearly showing their press credentials.

INCLO is a network of 15 independent, national human rights organizations from different countries around the globe that work together to promote fundamental rights and freedoms. We support and mutually reinforce the work of member organizations in their respective countries and collaborate on a bilateral and multilateral basis.

INCLO advocates for the promotion and protection of the right to protest and calls for stricter regulations on the use of less-lethal weapons at the national and international level.