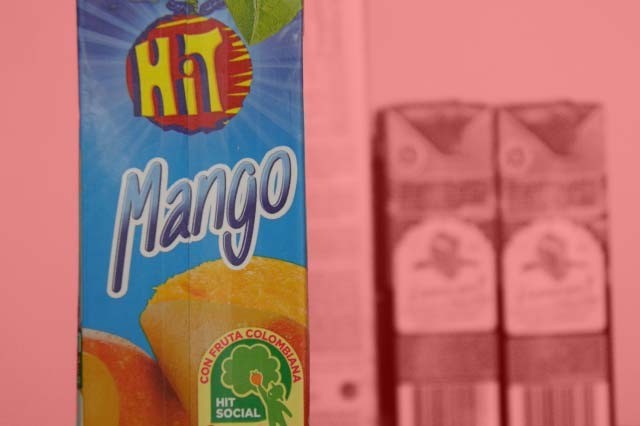 Photo: The actual percentage of fruit in these drinks varies between 1% and 10%, and in only one case it reaches up to 14%. | Santiago Ardila

The authorities found that the slogan “It’s natural that you like Hit” and other messages from Postobón contained misleading claims about the fruit content in these drinks. The measure was made after Dejusticia and Red Papaz denounced the case.

“Hit is made with delicious fruits,” says a voiceover while interspersed shots of blackberries, mangoes and fresh passion fruit appear in the scene. A man takes a bottle of juice from a refrigerator, to bring it to a table in the middle of a forest, where a lively group of people sits, and from then on the commercial tells us in reverse the “naturally incredible” things that happened so that the bottle of Hit reached that table. “They,” referring to fruits, grew in the field and “changed shape” until they became juice. “Now do you know why it’s only natural that you like Hit?”

When seeing this commercial, the impression is that this product would be made of pure fruit, but this could not be farther from reality. According to nutritionists and researchers Mercedes Mora and Adriana Zuleta of the University of Javeriana and National University, the actual percentage of fruit in these drinks varies between 1% and 10%, and in only one case it reaches up to 14%. Additionally, these drinks have an excess of sugar that does not contribute positively to the health of people, much less to that of children.

For this reason, and thanks to a note published on our portal about the tutela that Red PaPaz filed against the Superintendence of Industry and Commerce (SIC) and Invima (for allowing the Postobón Hit juices and the Fruper de Alpina juices to be publicized in this way), Invima has just banned the circulation of the described video and a radio ad of Postobón that presented Hit drinks being made “with the best of fruit”.

This occurred after the Invima Food and Beverage Directorate made an inspection visit to the Postobón facilities in Medellin this past September 14 to verify the compliance with the regulations regarding references to the quality of the products. The visit happened after Dejusticia published a news article on its website about the tutela filed by Red PaPaz which drew attention to the lack of response from Invima.

At the inspection visit, the Brand Manager of Hit, Yaneth Vargas; the Director of the Business Unit, Miguel Espinosa; and the lawyer from Postobón, Juan Ortíz, showed Invima officials the advertising pieces that were on air at that time. After analyzing and contrasting Hit’s health records with the content of two videos, two radio ads, and the website pieces that were on the air, Invima officials considered that some of the pieces were generating false impressions of the product and would be contrary to Law 9 of 1979 which prohibits making false references about the nature, origin, composition, and quality of a drink or edible product.

Why did they sanction Hit’s television commercial?

Hit is an ultra-processed product, whose formula contains flavors, colorants and artificial additives, with very low fruit content. But the video hinted at something else. While at one point the commercial clarified that “the content of fruit may vary depending on the flavor of the product,” this phrase appeared for a few seconds in very small print that was difficult to read, as a caption of forceful images in the foreground of succulent fruits, which became the main message. These repeated images of fresh fruits, together with audio that affirmed things like “Do you know why it is natural that you like Hit?” “because Hit is made with delicious fruits,” and “Because Hit has fruit and is delicious,” generated the impression that the product was composed mainly of fruit, which is false.

“The food product cannot be advertised, hinting that it is natural,” says Invima in a communication sent to Red PaPaz regarding the sanction of the pieces, since in its registration the product Hit appears as a “fruit drink” which “contains flavorings and additives.” Therefore, the image of juice that turned into fruit, accompanied by audio “changed shape,” referring to fruits, constituted a misleading message.

Why did they sanction Hit’s radio ad?

The radio ad announced the new passion fruit Hit as a drink with “50% more fruit” and contained affirmations such as “with much more fruit so you can enjoy all the flavor of passion fruit in a single bottle,” which was confusing and hinted that this drink had much more fruit than its actual content. According to the health record of Hit Passion Fruit, it contains additives, artificial flavors, and only 8% fruit. Invima considered that the advertising pieces generated a false impression to the consumers about the true composition of the product and sanctioned the radio ad.

Two years ago, Invima had requested the same thing from Postobón. On March 18, 2016, Invima suspended images and information from the Postobón website, as well as an ad and a television commercial for promoting Hit products with expressions such as “made of fruit” and “all the power and flavor of the fruit in a bottle” and for containing on its website a section called “Fruit,” where the drinks were located. This was very confusing because the company does not even have permission to market fruit. 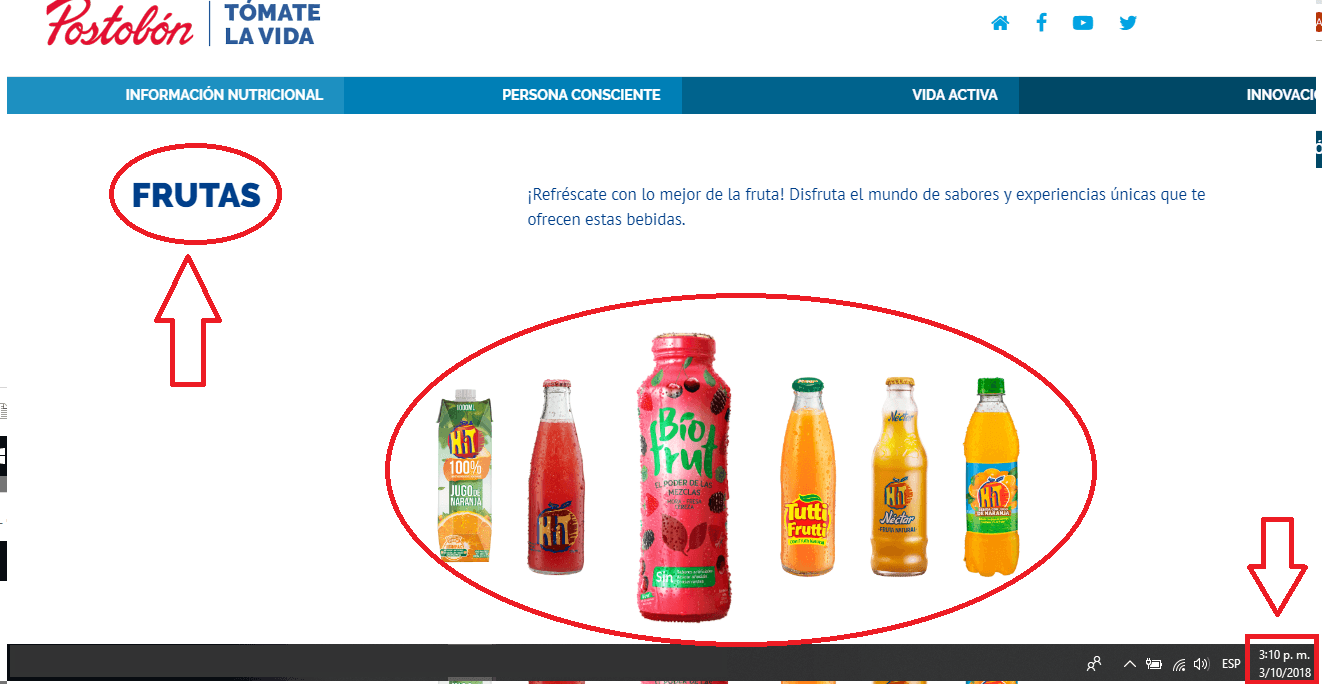 This was confirmed by Red PaPaz after submitting two complaints to the SIC in December 2017 for the misleading advertising of the Postobón Hit and Fruper de Alpina juices.

For researcher and lawyer Diana Guarnizo of Dejusticia, an organization that has accompanied the process of Red PaPaz, it is “unpresentable” that after Invima had already imposed measures on the advertising of the Hit juices, the confusing messages that suggest false information about the quality and quantity of fruit in this product continue to be part of its commercial strategy: “this shows that the existing standards are not enough,” she says, “because two years later the problem continues.”

Although there is a 2013 Invima regulation that seeks to avoid this type of confusion by establishing the names that beverages should have depending on their fruit content — if they have less than 8%, they cannot be called juices – there are gray areas in which companies are protected to publicize their products in confusing ways.

To date, Postobón continues to announce its Hit “juices” as made “with the best fruit” without following the instructions of Invima, as can be seen on its website and on its Instagram. In fact, the commercial censored on this occasion continues to circulate on television and on the company’s social networks.

Red PaPaz also agrees that this situation shows the legal gaps that exist when regulating misleading advertising in Colombia. 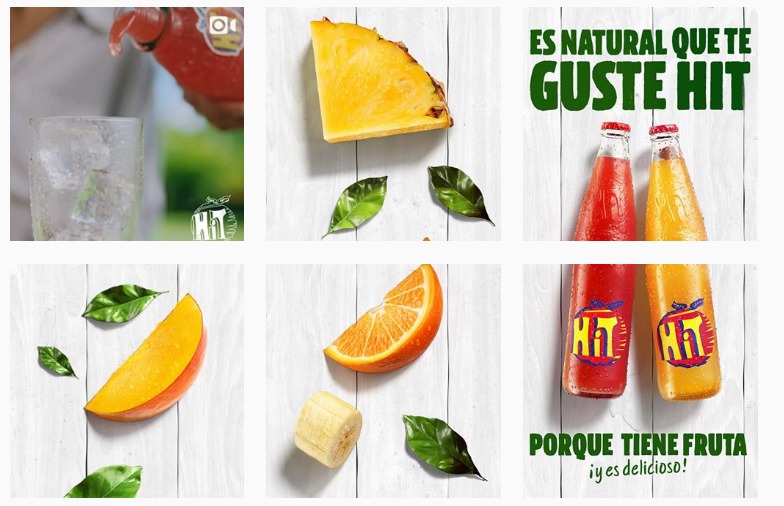 On September 6, 2018, Red Papaz filed a tutela against the SIC and Invima to ask the judges to protect the rights of children and parents to truthful information, to a balanced diet, and to the health of girls and boys.

What happened is that by the end of 2017, Red Papaz had filed two complaints with the Superintendence of Industry and Commerce (SIC), with the backing of more than 36,000 signatures of parents, against the advertising of the Hit drinks of Postobón and Fruper de Alpina, directed at minors under 18, without obtaining any response to their complaints.

Both Hit and Fruper have been using false messages in their commercials such as: “real fruit,” “recommended by pediatricians,” “makes you grow and learn,” “is juice,” “ideal for children,” with the objective of inducing its purchase and consumption by children and parents.

These types of messages have been criticized by nutrition specialists who have identified that the messages are misleading and risky, whenever they promote products with high concentrations of sugar, which have a harmful effect on health. Furthermore, the addition of nutrients to beverages, to justify that “they help you grow and learn,” are minimal, and there is no evidence that they nourish like natural foods.

For this reason, and in the absence of the adoption of measures against the complaints filed with the SIC, Red PaPaz decided to file this tutela, which Dejusticia accompanied, to demand more clarity on the products companies like Hit and Fruper put in their children’s lunch boxes. Today Red PaPaz and the 36,000 parents who signed are still waiting for a answer.