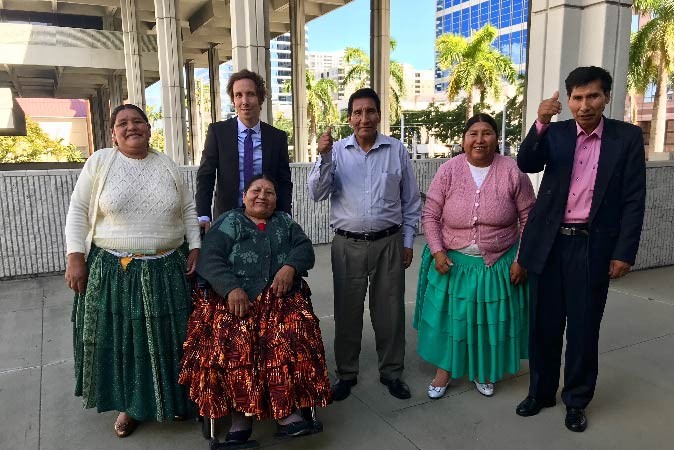 April 3, 2018, Fort Lauderdale, FL – In a landmark decision today, a federal jury found the former president of Bolivia and his minister of defense responsible for extrajudicial killings carried out by the Bolivian military, which killed more than 50 of its own citizens and injured hundreds during a period of civil unrest in September and October 2003. The decision comes after a ten-year legal battle spearheaded by family members of eight people killed in what is known in Bolivia as the “Gas War.” It marked the first time in U.S. history a former head of state has sat before his accusers in a U.S. human rights trial. The jury awarded a total of $10 million in compensatory damages to the plaintiffs.

“After many years of fighting for justice for our family members and the people of Bolivia, we celebrate this historic victory,” said Teófilo Baltazar Cerro, a plaintiff and member of the indigenous Aymara community of Bolivia, who were victims of the defendants’ decision to use massive military force against the population. “Fifteen years after they fled justice, we have finally held Sánchez de Lozada and Sánchez Berzaín to account for the massacre they unleashed against our people.”

the two defendants were legally responsible for the extrajudicial killings and made decisions to deploy military forces in civilian communities in order to violently quash opposition to their policies. In addition to the deaths, hundreds of civilians were shot and injured.

The three-week trial included the testimony of 29 witnesses from across Bolivia who recounted their experiences of the 2003 killings. Twenty-three appeared in person. Eight plaintiffs testified about the deaths of their family members, including: Etelvina Ramos Mamani and Eloy Rojas Mamani, whose eight-year-old daughter Marlene was killed in front of her mother when a single shot was fired through the window; Teófilo Baltazar Cerro, whose pregnant wife Teodosia was killed after a bullet was fired through the wall of a house; Felicidad Rosa Huanca Quispe, whose 69-year-old father Raul was shot and killed along a roadside; and Gonzalo Mamani Aguilar, whose father Arturo was shot and killed while tending his crops. One witness, a former soldier in the Bolivian military, testified about being ordered to shoot at “anything that moves” in a civilian community, while another recounted witnessing a military officer kill a soldier for refusing to follow orders to shoot at unarmed civilians. Witnesses recounted how tanks rolled through in the streets and soldiers shot for hours on end. Others testified about how the president and minister of defense committed to a military option instead of pursuing dialogue with community leaders to reach a peaceful resolution.

In 2016, a U.S. appeals court held that the plaintiffs could proceed with their claims under the Torture Victim Protection Act (TVPA), which authorizes suits for monetary damages in U.S. federal court for extrajudicial killings. Sánchez de Lozada and Sánchez Berzaín then sought and were denied a review by the U.S. Supreme Court in 2017, and the case moved forward in U.S. District Court. After a review of the evidence gathered by both sides, District Court Judge James I. Cohn ruled on February 14 that the plaintiffs had presented sufficient evidence to proceed to trial.

“The plaintiffs demonstrated immense courage in relentlessly pursuing justice for over a decade,” said Judith Chomsky, a Center for Constitutional Rights cooperating attorney for the plaintiffs. “They have set an example for anyone fighting for accountability for human rights abuses worldwide.”

“This win is not only a momentous victory for the plaintiffs and the people of Bolivia, but affirms that no one is above the law,” said Tyler Giannini, Co-Director of Harvard Law School’s International Human Rights Clinic.

“The plaintiffs’ victory sends an unmistakable signal to perpetrators around the world that they can be held to account for human rights abuses in the United States,” added Susan Farbstein, Co-Director of Harvard Law School’s International Human Rights Clinic.

After the jury announced its verdict, the defendants made a motion asking the judge to overturn the jury’s finding of liability against both defendants. Both parties will submit briefing on this issue in the coming weeks.