#LetsChangeTheGoal: We ask for a change in the deforestation target proposed in the National Development Plan

Civil society organizations sent a letter to Congress asking that the committee in charge of the National Development Plan change the indicators of deforestation results in Colombia.

Last March 5, 2019, the youth plaintiffs in the writ of protection (tutela) case involving climate change and future generations met with experts and civil society organizations to submit a letter to the coordinators and members of the congressional committee in charge of the National Development Plan (NDP) and ask Congress to change the deforestation targets in the NDP 2018-2022 entitled “Pact for Colombia, Pact for Equity,” proposed by the government of President Iván Duque.

The current target does not seek to reduce the number of hectares that will be deforested in the country; it seeks only to maintain the same level of deforestation for the next four years. Maintaining the current levels means that Colombia will lose more than 800,000 hectares of forests in the next four years: approximately six times the size of Bogotá. The current targets in the NDP are contrary to the Paris Agreement on climate change, Colombia’s commitment to reduce the level of deforestation in the Colombian Amazon to net zero by 2020, and the order of the Supreme Court of Justice in Sentence no. 4360 of 2018, which declared the Amazon as a subject of rights.

Congress of the Republic of Colombia

The undersigned, in our capacity as plaintiffs of the case involving climate change and future generations (Court Sentence No. 4360 of 2018), wherein the Supreme Court of Justice ordered the creation of a plan of action to reduce deforestation in the Colombian Amazon; members of the academe; civil society organizations; and citizens alarmed by the loss of forests in the country, wish to share our concerns about the deforestation targets established and articulated in the National Development Plan (NDP) 2018-2022.

In Chapter 4 entitled “Pact for Sustainability: Producing Sustainably and Conserving while Producing,” Line B entitled “Biodiversity and Natural Wealth: Strategic Assets for the Nation,” affirms that “one of the greatest socio-environmental problems of the country is deforestation.”

Below is a graph showing the number of hectares deforested annually in Colombia from 2005 to 2017: 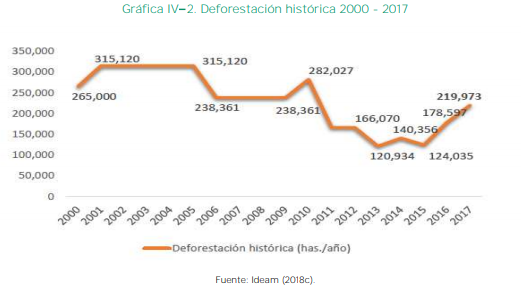 However, in the NDP, the results indicator on the “growth of deforestation at the national level with respect to the previous year” is established using a baseline of 23% and a goal of 0% growth for the next four-year period. This 23% pertains to the increase in the actual number of hectares deforested between 2016 and 2017, when deforestation increased from 178,597 hectares to 219,973 hectares. Using this growth rate as an indicator is a profound concern for us because it implies that the country will meet its deforestation target as long as the number of hectares deforested does not increase within the next four years. It means we can continue cutting 219,973 hectares of forests every year.

An analysis of official information in the above graph, published by the Institute of Hydrology, Meteorology and Environmental Studies (IDEAM, a government agency), clearly shows that, in the past seven years, deforestation reached its peak in 2017. Therefore, the current indicator allows an exorbitant amount of forest to be lost during the next four-year period: 879,892 hectares. Considering that deforestation is the main driver of greenhouse gas emissions according to the IDEAM, it is worrisome that the proposed goal allows deforestation to continue at such an exorbitant rate.

This target is contrary to the NDP 2014-2018, wherein the goal was not to exceed a maximum of 90,000 hectares of deforestation annually by the end of the four-year period. A comparison of the two plans clearly shows that the current target permits much more deforestation than the previous one. In addition to the environmental impacts that result from forest loss and the effects of climate change on future generations, failing to reduce the rate of deforestation constitutes a breach of national and international commitments of the Colombian government, including those under the Paris Agreement; the Joint Declaration of Intent with Norway, Germany, and the United Kingdom; and the court’s order in Sentence No. 4360 of 2018, which ordered the government to take measures to reduce deforestation in Colombia.

In view of the above, we respectfully request that, in discussing and approving the Law of the National Development Plan, the members of the committee in charge of the NDP change the results indicators so that the deforestation target is not based on the “growth of deforestation” but instead on the “maximum number of hectares deforested by the end of the four-year period”, and that this maximum number be fixed at 90,000 hectares.