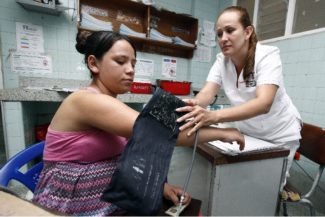 The high court protected the right to health of two undocumented Venezuelans and requested the government to advance as “expeditiously and effectively as possible” towards the full realization of migrants’ right to health, regardless of their immigration status. Dejusticia intervened in the case.

In Venezuela, the shortage of medicine and hospital implements is so serious that it has unleashed a strong surge of migrants forced to leave their country, mainly to Latin America, to receive treatments and diagnoses to save their lives, the lives of their children, or of their relatives. In Colombia, until that date, the government had determined that both Venezuelans and other migrants in an irregular situation could only be admitted to hospitals and health centers if they required “vital emergency services.”

This generates discrimination against those who request care for chronic diseases that are high cost or urgent surgeries. But the Constitutional Court has just clarified — through the T-210 judgment of 2018 — that in Colombia, access to health services for migrants must be granted under conditions of equality (since, according to the Constitution, migrants have the same rights as nationals) and consequently, that health care must extend beyond emergency services that are now being guaranteed.

At a minimum, the court explained, the state “must guarantee to all migrants, including those who are in an irregular situation, not only emergency care with a human rights perspective, but also preventive health care with a vigorous approach to public health,” that is, strong preventive care that avoids health risks for both migrants and the community that receives them.

This concept is different from only being granted medical services in “initial emergency care” because, as the court explained, the services must be expanded to a portfolio focused on “preserving life and preventing critical permanent or future consequences, through the use of health technologies for the attention of users that present alteration of physical, functional, or mental integrity, for any reason and with any degree of severity that compromises their life or functionality.” For the Court, “emergency care” of the entire migrant population is an obligation requiring immediate compliance, and thus, it can be demanded directly.

In the event that the state does not have the money to cover this care, the Court asks the authorities to demonstrate that they have made every effort to utilize the resources at their disposal. In addition, the court urges, through the sentence, that the Government adopt measures “directed to the achievement of international and national cooperation resources that permit the full realization of the right to health of migrants regardless of their immigration status, especially the most vulnerable: girls, boys, mothers who are heads of households, ” taking into account that, as indicated by national and international standards for the protection of rights, and in particular the principle of non-discrimination, the right to health must be guaranteed to migrants, regardless of their migratory status.

Regarding the humanitarian crisis that is presently occurring in Venezuela, the court recognized that “due to the critical economic and political situation facing the neighboring country and the economic precariousness in which the vast majority of its nationals who arrive in Colombia experience, compliance by Venezuelan migrants with some duties imposed by immigration legislation to achieve regularization in Colombia and health regulations to achieve membership, is difficult to comply with.”

Consequently, the Court called on the government to take into account the barriers faced by migrants to accessing the provision of health services, emphasizing that these are criteria for reviewing current regulations and issuing new regulations that reduce disproportionate burdens that are currently imposed on this population. This call is made taking into account that in Colombia migrants must have an identification document that proves their mirgratory status to be able to join the health system.

The cases that the Court resolved

In the T-210 judgment of 2018, the Constitutional Court studied the case of Natty Sanguino and Miguel Márquez. Natty, who is 34 years old, is a Venezuelan citizen, mother who is the head of the family, and daughter of a Colombian mother who had to migrate to the city of Cúcuta in search of treatment since she had been diagnosed with cervical cancer. In Venezuela, she did not have access to medicine or chemotherapy treatment. Miguel is a two-year-old boy who was diagnosed with a scrotal hernia and an umbilical hernia from birth. Miguel could not be operated on due to the lack of anesthesia in the hospital in the city where he lived in Venezuela.

Both Natty and Miguel, received emergency care through IPS in the city of Cúcuta, but because they were in the country irregularly and therefore were not affiliated with the health system, they were not authorized to continue the necessary medical treatment. In the case of Natty, the necessary medical treatment was regarding access to chemotherapy and radiotherapy, and for Miguel, it was surgery to remove the hernias.

Given the denial of access to medical treatment, Natty and Miguel’s mother utilized the tutela action to request the protection of their rights to health, life, and dignity. Natty’s request was denied by the judge of first instance with the argument that she had received the required emergency care and that in order to access a high-cost treatment such as chemotherapy, she must have a document that shows her migratory status which would allow her to join the health system.

In the case of Miguel, the tutela was partially granted in the first instance, and the judge ordered that the evaluation for surgery be advanced and that the surgery be performed only if the treating physician considered it a vital emergency. This ruling was appealed, and in the second instance, the Court of Cúcuta denied the protection of the right arguing that the boy did not have any document that proved his legal stay in the country and was not affiliated with the health system.

On June 1, the Constitutional Court ordered that the rights to the health, life, and dignity of Natty Sanguino and Miguel Márquez be protected. In the case of Natty, it was ordered that the radiotherapy and chemotherapy cycles be authorized, and in Miguel’s case, that the surgery be authorized for him by the specialist doctor.

The Constitutional Court invited Dejusticia and other civil society organizations to deliver their legal concept regarding the cases of Natty and Miguel. In our intervention we argued the necessity to guarantee the right of “basic health care” to all migrants regardless of  their migratory status. This includes not only emergency care, but also access to primary health care, all immunizations against the main infectious diseases, and the satisfaction of the health needs for the groups at the highest risk, that due to conditions of poverty are more vulnerable, according to the protocol of San Salvador, of which Colombia is a party.

Likewise, we called on the Court regarding the need to guarantee comprehensive health care, i.e. the provision of all necessary services conducive to the prevention, conservation, or the recovery of health in the case of boys and girls, as well as people with chronic and terminal illnesses that are in the national territory and under their jurisdiction, regardless of their migratory status, because they are subjects of special protection.

On the other hand, at Dejusticia, we argued that the requirement of a regular migratory status to access health services is a disproportionate burden for the migrant population in vulnerable situations, especially in the face of the high improbability or impossibility of these people to obtain the documents and the necessary resources to access traditional forms of migratory regularization. In addition, it ignores the international standards to which the State of Colombia has committed itself.

Dejusticia requested that the petitions of Natty and Miguel be granted and that, in addition, the Ministry of Health and Social Protection be ordered to create and implement a comprehensive health policy that guarantees the right to health of migrants from Venezuela, which includes providing basic medical care, regardless of migratory status. This policy must take into account the essential core of the right to health, which implies equal and timely access to preventive, curative, and palliative medical services and essential medicine. These requests were incorporated by the Court in its tutela judgment.

Prison is not the only sanction in transitional justice mechanisms