The International Corporate Accountability Roundtable (ICAR), the European Coalition for Corporate Justice (ECCJ), and the Center for the Study of Law, Justice, and Society (Dejusticia) are pleased to release an updated report on Assessments of Existing National Action Plans (NAPs) on Business and Human Rights (August 2017).

To date, eighteen countries have developed and approved NAPs on business and human rights, including in 2013: the United Kingdom and the Netherlands; in 2014: Denmark and Finland; in 2015: Lithuania, Sweden, Norway, and Colombia; in 2016: the United Kingdom’s section iteration, Italy, Switzerland, the United States, and Germany, and in 2017: France, Poland, Indonesia, Belgium, Spain, and Chile.

Additionally, a number of other States are in the process of developing NAPs on business and human rights or have publicly announced an intention to do so—including an increasing number of countries in the Latin American and ASEAN regions. As the creation of NAPs on business and human rights continues to proliferate globally, it is essential that existing NAPs be closely analyzed in terms of their content and processes in order to assess best practice and to suggest areas for improvement going forward.

These structured NAPs assessments are based on the ICAR-Danish Human Rights Institute (DIHR) NAPs Toolkit, released in June 2014, which provides a set of 25 criteria by which the content of NAPs and the process undertaken by States in developing them can be assessed. The ICAR-ECCJ-Dejusticia assessments of existing NAPs builds on the ICAR-DIHR NAPs Toolkit to help provide critical and structured feedback to States who have already developed NAPs and to provide a reference point for States that are on the path to developing them.

For more on ICAR’s ongoing work on NAPs, including this report, please contact Cindy Woods, ICAR Legal and Policy Associate, at [email protected].

*At the time of the publication of this updated report, the NAPs of Germany, France, and Poland had not yet been translated into English, hindering a full assessment by the report authors. In addition, the NAPs of Indonesia, Belgium, Spain, and Chile were published after the report publication cut-off date. ICAR aims to conduct assessments of these NAPs, and all future NAPs as they are published. 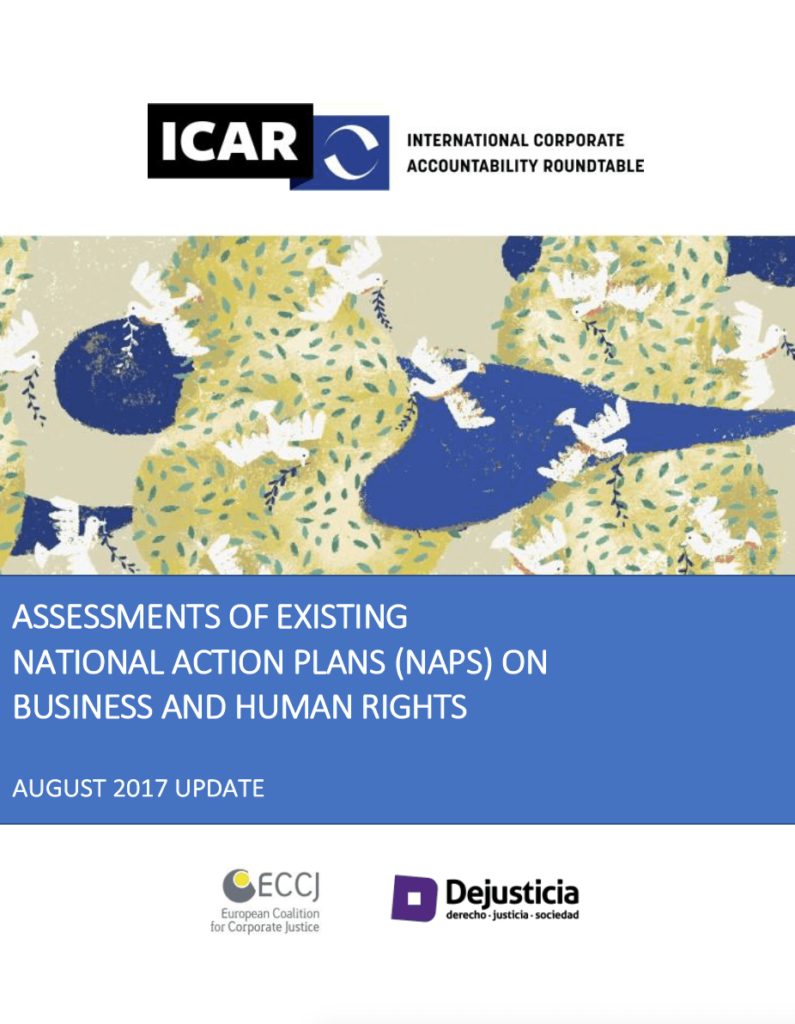 Human Rights Due Diligence to Identify, Prevent and Account for Human Rights Impacts by Business Enterprises

BUSINESS AND HUMAN RIGHTS: SUBMISSION TO THE INTER-AMERICAN COMMISSION ON HUMAN RIGHTS AND THE SPECIAL RAPPORTEUR ON ECONOMIC, SOCIAL, CULTURAL AND ENVIRONMENTAL RIGHTS