This document aims to analyze the challenges that coca producing municipalities face in two crucial aspects in the future: the construction of a local State and the definition of a human development path that is both integral and participatory.

The implementation of the Peace Agreement between the Revolutionary Armed Forces of Colombia (FARC) and the national government – as well as the beginning of the negotiations with the National Liberation Army (ELN) – mark a significant point in the political and economic history of the country. This situation requires reflecting on the path ahead, and the challenges that coca producing municipalities face in the medium and long term to achieve a stable and lasting peace.

Colombia still has time for fundamental definitions. The post-agreement period is a moment in which the foundations of future local trajectories are laid. There, the old disputes and debates around agrarian reform, the democratic system, and the development model are addressed in the context of a possible democratic opening, in which traditional and emerging elites, plural visions of the social movement, and illegal armed organizations that will hamper peace efforts to ensure control of the economies of drug trafficking and mining coexist.

This document aims to analyze the challenges that coca producing municipalities face in two crucial aspects in the future: the construction of a local State and the definition of a human development path that is both integral and participatory. These two aspects can reinforce each other, but if they are addressed while ignoring their mutual dependence, they may be both be undermined. Institutional capacity-building and development are processes that emerge in a relationship of mutual interdependence between the State and society, where strengthening active citizenship and a prosperous and inclusive economy is as important as creating more effective and democratic institutions.

The document is divided into three parts. The first part offers a reconstruction of old debates: the attempts to bring the State to the periphery of the country and the different views on territorial development. Later, the text presents a brief history of the relationship between the Revolutionary Armed Forces of Colombia (FARC) and the illegal coca leaf economy as well as the impacts of illicit crops in the producing municipalities. In the second part, the book makes a comparison between some institutional performance and social indicators in municipalities with coca crops and the rest of the country. The quantitative tone is due to the discussions that currently exist around the construction of new indicators of achievement and evaluation of drug policies. This should be thought of as a first effort to diagnose how the consequences of the coca economy and policy actions have been reflected on social indicators, using the municipalities where this phenomenon does not take place as a parameter. Then, the text illustrates common aspects and differences based on the construction of a narrative, with a more qualitative emphasis, in three municipalities: Tarazá, San Vicente del Caguán and Puerto Asís. From the above, two variables are suggested to think of a typology of municipalities with illicit crops in order to differentiate the public policy strategies that should be implemented in the post-agreement framework. Finally, the third part addresses the advances, challenges, and recommendations of the municipalities that produce coca leaf and base paste, based on an analysis of drug issues in the peace agreement. It also includes a series of policy recommendations to address the challenges that coca producing municipalities have in institutional and socioeconomic matters as well as in the implementation of better drug policies, recognizing the differences between them. 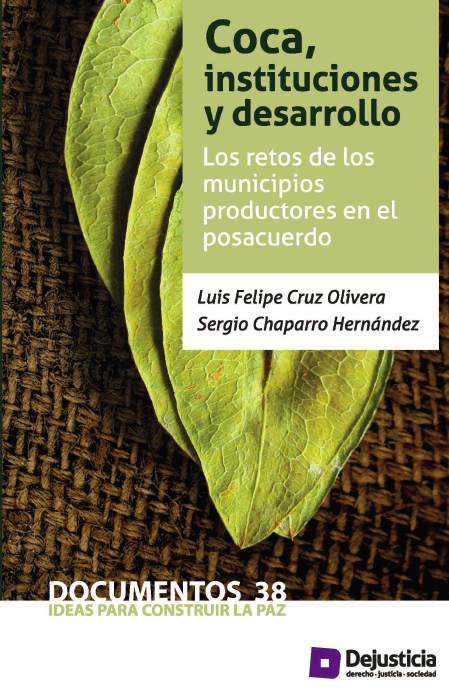 The OECD and the Downscaling of Labor and Pension Policies: Imagining Alternatives through Decent Work and Rights