Ten years after the adoption of the Bangkok Rules by the 193 countries represented at the UN General Assembly, states across the world have largely failed to implement them, while the number of women in prison has continued to raise dramatically. | Dejusticia

A set of 70 rules that seek to adapt world prison systems to the needs and experiences of women deprived of liberty are in risk by the punitive approach of many drug laws.

For centuries, criminal laws, justice systems, and prisons have been designed for, and by, men. The 2010 United Nations Rules for the Treatment of Women Prisoners and Non-custodial Measures for Women Offenders, also known as the ‘Bangkok Rules’, break away from this history by establishing the first set of international human rights standards that focus on the specific needs and experiences of women deprived of liberty.

Ten years after the adoption of the Bangkok Rules by the 193 countries represented at the UN General Assembly, states across the world have largely failed to implement them, while the number of women in prison has continued to raise dramatically. By 2020, an estimated 741,000 women were incarcerated worldwide, compared to 636,000 in 2010. The global female prison population is estimated to have increased by about 59% from 2000 to 2020.

This worrying trend has been fuelled by the harshly punitive drug laws adopted at the end of the 20th century. In many countries in Asia and Latin America, drug offences are the main cause for the incarceration of women. In most cases, women are detained for carrying out low-level drug activities, such as transporting drugs, that are characterised by high risk, a high degree of replaceability within illegal drug organisations, and very little financial reward.

Prison laws and Drugs: Any changes?

Although theoretically ‘gender-blind’, punitive drug policies such as the disproportionate use of pretrial detention, mandatory minimum prison sentences, and the dearth of harm reduction and evidence-based treatment in prisons, have impacted women disproportionately. They have also ignored the causes for women’s involvement in illegal drug activities, which include the intersection of poverty and caretaking responsibilities, and coercion or influence at hands of a male relative or partner. In other words, they have undermined the application of the Bangkok Rules.

For advocates across the world, the 10-year anniversary of the Bangkok Rules is an opportunity to remind states that gender equality policies, criminal justice rights and drug laws are not isolated from each other. If states want to implement a genuine agenda for gender equality, they need to review the laws and policies that undermine it—including drug legislation.

• Address prison overcrowding by immediately releasing all women incarcerated for minor or non-violent drug offences, including but not limited to drug use and possession for personal use, and non-violent drug supply offences committed by women in situations of vulnerability, and ensure adequate support to transition into the community.

• In the context of COVID-19, it is especially urgent to release women with health risks, and women in situation of vulnerability, such as older women, disabled women, pregnant women, women with children, and women responsible for other dependants.

• Urgently amend existing laws and policies to ensure that women charged with, indicted for, or convicted of minor or non-violent drug offences are eligible for diversionary measures and alternatives to incarceration and punishment.

• Ensure that women who remain in prison during the pandemic have access to strictly voluntary evidence-informed, rights-based, gender-sensitive drug services, including drug dependence treatment, harm reduction and additional support services focusing on addressing past histories of trauma, gender-based violence and mental health. 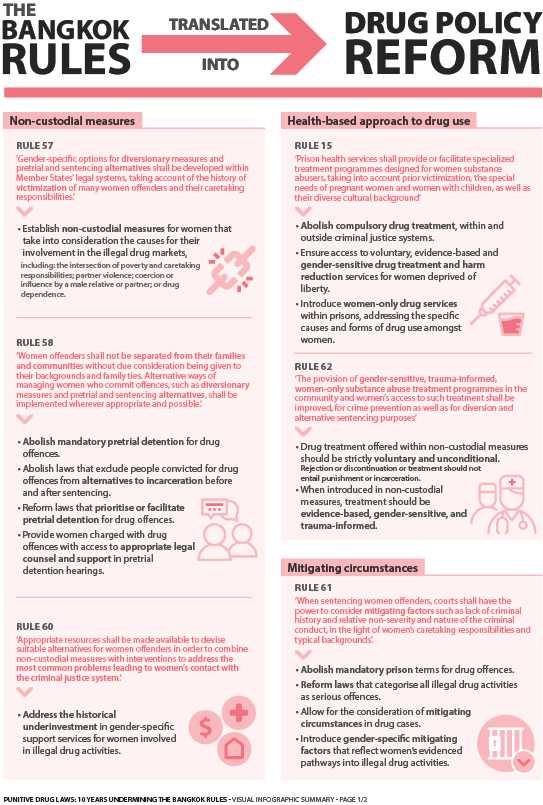 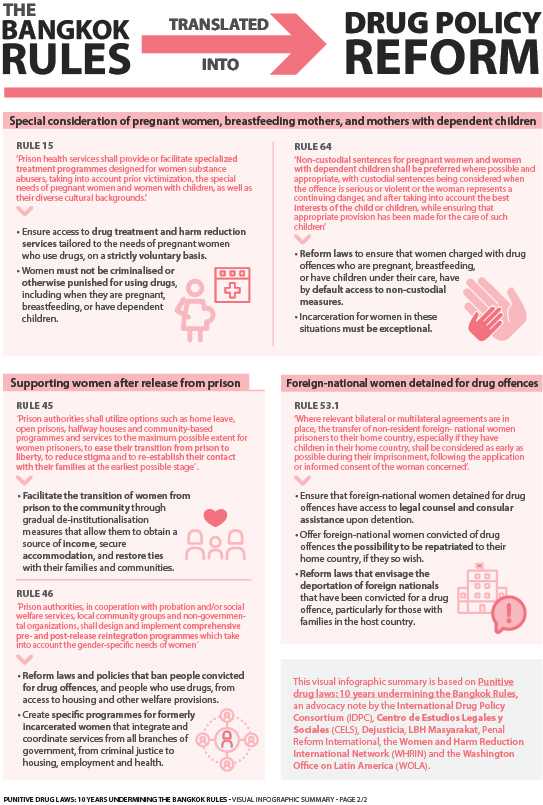