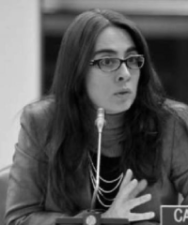 Catalina Botero Marino is a Colombian attorney and expert in constitutional law, international human rights law, and transitional justice. Holding a law degree from the Universidad de los Andes (Colombia), she has also done postgraduates studies in constitutional law, human rights, public administration, and administrative law. In 2015 and 2016 she was designated deputy judge of the Constitutional Court of Colombia. Currently she is a senior advisor for entities such as Unesco and the Electoral Tribunal for the Judicial Power of the Federation of Me?xico. She is a member of the Academic Council of the Center for Constitucional Studies of the Supreme Court of Justice of the Nation of Mexico and an invited expert to diverse academic projects such as Global Freedom of Expression and Information of the University of Columbia in New York; LatinAmericaGoesGlobal of the Faculty of International Affairs of the same university and the global observatory Internet & Jurisdiction Project. In 2016 she has been professor of the University Externado de Colombia and the Academy of Human Rights and International Humanitarian Law of American University. She is a founding partner of the Centro de Estudios de Derecho, Justicia y Sociedad (DeJusticia), a member of the Directive Board of the Fundacio?n para la Libertad de Prensa (FLIP) and the international academic committee of the Centro de Estudios de Libertad de Expresio?n y Acceso a la Informacio?n (CELA) of the University of Palermo (Argentina).From 2008 to 2014, she was Special Rapporteur for Freedom of Expression of the Organization of American States Inter-American Commission on Human Rights (ICHR) of the Organization of American States (OAS). Prior to being elected Rapporteur, was she worked for eight years at the Constitutional Court of Colombia as Acting Judge and Deputy Judge. She also worked as special advisor to the Attorney General of the Nation of Colombia and General Director of the Office of the Peoples Ombudsman of Colombia. She has participated in more than 200 academic conferences and lectures in institutions throughout the Americas and Europe.

To Prohibit Blasphemy is Useless and Results in Perverse Consequences

Preamble to the Political Constitution

The right to freedom of expression: advanced course for judges and legal practitioners in the Americas

Practical Guide of the International System of Protection of Human Rights

Between ‘el Perdón’ and ‘el Paredón’: International Standards and Transitional processes in Colombia

The Law of Alternative Criminal and Transitional Justice