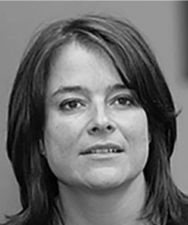 Ph. D. in Economic Law and Gender, and LL. M., at Harvard University; law degree at the Universidad de los Andes. Founding member of DJS. Currently, Director of the Master’s Degree in Law at the Universidad de los Andes, teaching the following courses: Theory of Private Law, Theory of Public Law, Legal Theory, and Law and Development. Periodically, also teaches similar courses in other Colombian and international universities, such as: Universidad Pontificia Javeriana in Colombia, the University of Puerto Rico, and Harvard University. An expert on feminist approaches to law, and on the relationship between law and development, she has been a speaker at a variety of conferences in several countries. Author of the following articles or essays, among others: “Aproximaciones feministas al Derecho Comercial” (in Revista de Derecho Privado, No. 27, Uniandes Ed., Universidad de los Andes, Bogotá, December 2001); “The Relationship between Modernization and Law in Colombia during the First Half of the Twentieth Century” (essay presented at the Harvard Law School, 14 April 2002; forthcoming), and “The Influence of Leon Duguit in the Colombian Constitutional Reform of 1936” (essay presented at the Harvard Law School, 8 December 2001; forthcoming).

The choice between freedom or security

The End of the Economic Orthodoxy

The vote for social politics

Return to a Welfare State

The necessity of public debate

The importance of the election of judges

Why the fright of equality?

Domestic violence as a topic for all

It is sufficient to simply include a woman on the list?

Who cares for the children? The State or the family?

Twenty women and their influence on Feminism

Another view about abortion

The Ecuadorian crisis and the problem with Judicial independence

Judicial Defense of the State: Justice Through Litigation?

If Shiavo were Colombian

The True Judicial Activism: The Supreme Court of the United Status establishes limits on the fight on terrorism