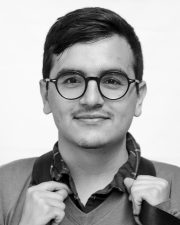 Andrés Quezada was one of the founders of the JusticiaYa collective (formerly RenunciaYa) that was a key player in the anti-corruption movement that ended up ousting the president and vice president of Guatemala in 2015. He has a BA in Philosophy from Rafael Landívar University and is Professor of Political Philosophy in the Faculty of Political Sciences of said university. He has worked in alternative media such as Nómada, as a cultural producer, in the Congress of Guatemala as parliamentary advisor, and is an independent consultant on political communication. He is an environmental activist, an avid reader, a poetry enjoyer, and a meme expert.

At Dejusticia, Andrés works as a Global South Fellow in the Regionalization Area.