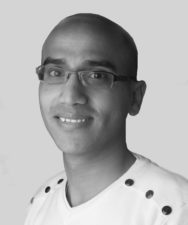 Osamah graduated from English Department, Faculty of Arts and Humanities, Sanaa University (Yemen) in 2010. His focus is on defending human rights in Yemen, and he is the senior researcher and director of research unit at Mwatana for Human Rights. Since 2008, he has worked with different local and international organizations including Human Rights Watch and Amnesty International. He is a co-founder of #SupportYemen Media Collective which established during the uprising in 2011. At Dejusticia, he worked in the area of civil society space in Yemen. He has participated in various programs, events, and meetings including OHCHR’s regional stakeholders consultation for MENA in April 2017 and hosted by Sanaa Center for Strategic Studies as a speaker in Yemen Exchange Program on “Human Rights in Yemen” in Beirut, October 2017.