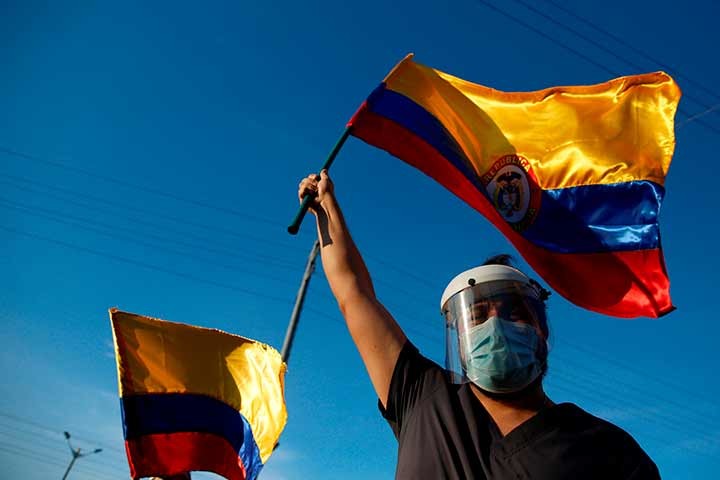 We welcome the decision of the Supreme Court of Justice that recognizes the importance of free expression in a democracy and protects the rights of citizens to protest without the risk of being attacked by police officers  in response to their legitimate claims. Likewise, we urge the National Government, the Prosecutor's Office, the Public Ministry, the National Police and the Mayor's Office of Bogotá to promptly comply with the orders issued. | EFE

The Supreme Court of Justice of Colombia protected the right of all people to demonstrate and the duty of the authorities to “ward off, prevent and punish the systematic, violent and arbitrary intervention of the public force in demonstrations and protests.”

At the end of 2019, during the National Strike of November 21st demonstrations and mobilizations, a group of citizens, social organizations, human rights defenders, students, journalists, university professors, relatives of victims and victims of police violence, presented a legal action (tutela) requesting the protection of our fundamental right to protest, freedom of expression and  press freedom.

In the legal action, we showed that the Colombian Government and the National Police violated the constitutional rights of those who demonstrated during the protests of last November. Police officials  were engaging in the following conducts: 1) the arbitrary dissolution of peaceful protests, 2) the illegal use of weapons potentially lethal, 3) the disproportionate use of chemical irritants in the dissolution of protests, 4) the arbitrary retention of people in the context of protests and 5) attacks on journalists covering the demonstrations.

On September 22nd of 2020, the Supreme Court of Justice safeguarded the right of all people to demonstrate and the duty of the authorities to “ward off, prevent and punish the systematic, violent and arbitrary intervention of the public force in demonstrations and protests ”. The decision is based on the constitutional and international protection the right to protest has. The limitations to its exercise can only be defined legally, therefore, other authorities cannot attribute the definition of the way in which people can exercise their right to protest, which according to the Court consists of “dissenting and making their thoughts public.”

The Court found that “there was – and may continue to exist – a repeated and constant disproportionate aggression by the public force against those who, in a peaceful manner, demonstrated” and those who made a journalistic coverage. This shows “a serious and current threat by the impulsive behavior of the public force and, especially, of the Mobile Anti-Riot Squad (ESMAD), who has openly ignored, not only its own manuals, but also principles and values ​​of constitutional rank.”

Thus, the actions of the public force, without adequate control or accountability, “represent a risk, a serious and current threat for those who intend to go out and mobilize to peacefully express their opinions because their actions, far from being isolated, are constant and it reflects a permanent individualizable aggression within the framework of the protests ”, the decision indicates. In addition, the Court also found violations of rights related to massive raids by the Attorney General’s Office of the homes and residences of those who have a legitimate interest in participating in the protests.

The main orders issued by the Court to guarantee the fundamental right to protest are:

(i) The Minister of Defense must present an apology for the excessive use of force by the police officials , especially the Mobile Anti-Riot Squad (ESMAD), in the protests that took place during November 21st, 2019;

(ii) Members of the Government must maintain neutrality when non-violent demonstrations occur, even if they are aimed at questioning their own policies;

(iii) A working group must be set up to restructure the guidelines on the use of force in demonstrations with citizen participation, and issue regulations on the matter that are in accordance with international and constitutional standards;

(iv) The government must design a protocol of preventive actions, accompaniment and monitoring of the reaction, use and verification of the legitimate force of the State and the protection of the right to peaceful citizen protest, including public and supported reports when attacks on life and personal integrity occur;

(v) The government must issue a protocol that allows citizens and human rights organizations to carry out verifications in cases of arrests and transfers of people during protests and,

(vi) The use of twelve-gauge shotguns for intervention in protests must be suspended.

This ruling is more than timely, given the need to restore the Rule of Law and the safeguarding of life and social protest after the events that occurred on September 9th and 10th, 2020, where young people (at least eleven) were killed in different locations in Bogotá and Soacha in the context of demonstrations for the same police violence that the Supreme Court recriminates in its decision.

This ruling recognizes the urgency of imposing concrete limits on the actions of the Colombian National Police and its Mobile Anti-Riot Squad (ESMAD), making a clear call for attention to the denial of these facts by the National Government.

We welcome the decision of the Supreme Court of Justice that recognizes the importance of free expression in a democracy and protects the rights of citizens to protest without the risk of being attacked by police officers  in response to their legitimate claims. Likewise, we urge the National Government, the Prosecutor’s Office, the Public Ministry, the National Police and the Mayor’s Office of Bogotá to promptly comply with the orders issued.