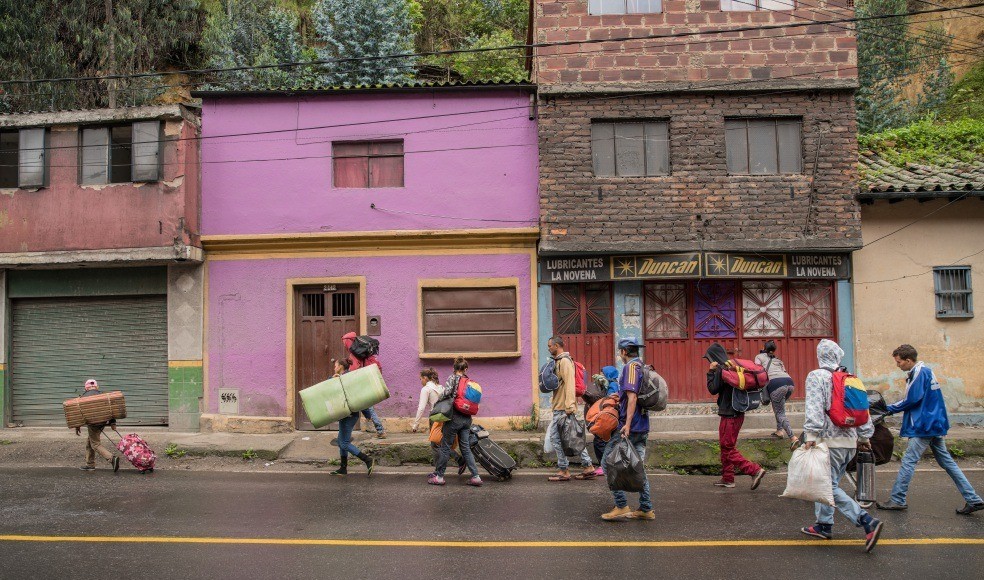 In response to the presidential elections, a repeated phrase is heard among those crossing the Simon Bolivar bridge to take refuge in other countries across South America: “Only God can save Venezuela.”

Júnior Reverol, 35, has been sleeping on the side of the highway leading from Cúcuta to Cali for three days. The blankets and pads that he carries are not enough for his wife Joselyn; his three children of 10, 12, and 14; his sister-in-law Karina, who is eight and a half months pregnant; his four cousins; and a couple of friends. They have already spent two nights sleeping in gas stations alongside trucks, grease, and the intense odors of fuel that make one dizzy. They are currently in the Berlín Paramo in Santander, one of the highest points along the Andes mountains. The end of the day finds them asking for rides to Bucaramanga, without success. The intense cold leaves everyone with coughs, and the mist dampens their clothes, chilling them. “We’re on the verge of hypothermia. One of us is fainting,” says Jocelyn to her sister through a voice message on Whatsapp. None of them has ever been on a mountain so high—much less slept outdoors surrounded by fog.

They are fourteen in all: housewives, masons, mechanics, scavengers, and children coming from Caracas, fleeing hunger. In January, they crossed the border into Colombia through Cúcuta. “Cúcuta is a mess, fuck, and there isn’t work for anyone, no matter how much you look, and every day more and more families arrive. And now, with the elections, everything’s getting worse,” says Jhonatan, one of the fourteen.

For Jhonatan, Júnior and Joselyn, this weekend’s presidential election in Venezuela simply means there will be more of them on the highways and in the terminals, the plazas, the informal markets, the 5,000 peso/night residences, and the marginal neighborhoods around Colombia. As for the rest, the family does not feel like a part of a democratic system—for them, their vote is not representative. It means nothing.

We remember: Venezuela must respect the people’s right to free and fair elections

The fourteen slept in shelters in Cúcuta until they were told that they had to leave to give space to others. They spent a few days in the street before beginning to walk.

•“If everyone leaves Venezuela, who is going to vote against Maduro?” asks Olga, a resident of Norte de Santander who lives off the highway store she owns in the eastern sector, as she serves them bread and malt drinks.

“Honey, only a miracle can save Venezuela,” says Karina. “That dictator has bought all the elections with food. Nothing is going to change. It doesn’t matter if the people vote. It’s already decided.”

•“See, the government knows how to play with the needs of the Venezuelan people. It’s disgusting. We’re as low as you can get. Maduro has tied the votes to the hunger of the people. The need is enormous, and they have us marked by national IDs. That way they assure that you vote for him. The corruption is endless,” says Luisa*, a member of the Venezuelan National Guard who decided to leave her country in spite of the benefits she received from the Venezuelan State. “There are many in the Guard who stay because they need to provide food for their children, everyone knows that.”

The spirits of the Venezuelans that cross the border are pessimistic. Nicolás Maduro’s photograph was repeated ten times on the list of candidates from the Venezuelan National Electoral Council. This, and a reelection that seems inevitable, was the “point of no return” for many. In 2013, the last presidential elections left behind the era of Hugo Chávez and welcomed in the leadership of Nicolás Maduro with a Venezuela already experiencing food shortages. These shortages, deepend by the profound economic crisis and falling petroleum prices, now affect not only refrigerators, but every aspect of daily life, and force many people to be separated from their families and leave behind everything to migrate, principally across South America and Europe. The failure of massive protests last year, which resulted in 157 dead and the dissolution of opposition party leadership, was another blow to the hopes of those calling for change.

“A pair of shoes for my children costs me 9 million bolivars. My monthly income is 1.5 million. Venezuela is trapped. The people can’t put up with rising costs, the vote isn’t going to change anything. That image of women selling hair on the border to pay for transportation is just one demonstration of how desperate we feel. The people aren’t going to put up with four more years of Maduro. God help us,” says Diana Castañeda, who comes from the state of Carabobo, and sleeps in the Pamplona terminal in Norte de Santander, hoping to gather enough money for a bus to Bogotá, and then to Lima, where her brother is waiting.

Ten journalists from Venezuela who arrived last week to Cúcuta to participate in a human rights workshop confirmed that in Caracas it is more and more common to encounter water shut-offs, medicine shortages, people eating from trash bins, vastly unaffordable meat, the absence of cash, the metro abandoned, the city deserted after 6pm, and symbolic salaries that, although they number in the millions, are not enough for anything. Before returning to Venezuela to cover the elections, only one of the journalists said they would be voting next Sunday. Everyone said they would have lead the front page with the story of re-election.

#VenezuelaBienvenida: Colombian-Venezuelans return to Colombia, a product of the crisis

According to data from the UN World Food Program (WFP), there are at least 660,000 Venezuelans in Colombia, of the 1.6 million that have left their country in the last three years. And then there are predictions from human rights organizations like Provea, who project that the elections will multiply the number of migrants and refugees that cross South America, using Colombia as a principal point of transit.

The scheduled closing of the border for the election day next weekend has turned the crossing to Cúcuta into an endless procession of Venezuelans from all social classes, desperate to get somewhere. Anywhere. Bucaramanga, Cali, Medellín, Bogotá, Quito, Rumichaca, Santiago de Chile, Buenos Aires. For most, all of the cities represent the same thing, no matter if the climate is like that of Caracas, Valencia or Barquisimeto, or if the cities are surrounded by mountains, rivers, or the ocean. Such differences don’t matter much when what you urgently need is work, so that you don’t have to go to bed without eating, and later, can save up enough to send money back to Venezuela.

• Karina, are you going to tell your baby that you were almost at the point of giving birth on a highway in Colombia?

• I’m going to tell him everything, that I did all of this for him and for his sisters. God gave us this challenge, he gives me strength on the way and he has put everyone along the way that has helped us with food, or by giving us drinks. Only God knows why the Venezuelans are going through this, and he’s the only one who can get us out. But we have to keep moving forward. I’ll go to Cali, earn some money, and return to Caracas for my children. My goal is to bring them with, because in Venezuela, they can’t put up with any more.

*The name has been changed to protect the source