More than 60 innocent Colombians sleep in Venezuelan jail cells. Although similar situations have resulted in diplomatic confrontations between Venezuela and countries such as Brazil, in Colombia, the Minister of Foreign Affairs, María Ángela Holguín has kept a low profile.

The Colombian-Venezuelan, Juan Pedro Lares, age 23, has been imprisoned for nearly six months in the El Helicoide prison in Caracas. His crime: being the son of a politician who opposed the government of Nicolás Maduro. A few kilometers away, at police headquarters in La Yaguara, sleeps William Sarabia Ospino, German Espitia, Emerson Gutiérrez, Doiler Yépez, Edelberto Ramos Terán, and 53 other innocent Colombians, incarcerated one year and four months ago.

Juan Pedro was arbitrarily detained in his home in Mérida this past July, when 200 SEBIN agents attempted to capture his father, Omar Lares, then mayor of the Campo Elías municipality (Mérida). The operation was part of an official strategy of persecution against opposition mayors, initiated after the massive protests in April of 2017. Omar Lares escaped, fleeing out of the back of the house—so the armed agents took his son.

The other detainees—58 men and one woman—were part of the 92 Colombians who, in September of 2016, became victims of “Operation Liberate the People,” a strategy used by the Maduro government to counteract rising violence in Venezuela. Maduro claimed that they were “paramilitaries planning to attack el Palacio de Miraflores.” Later, it was revealed that many were simply intercepted while walking through the streets of Caracas. After being identified as Colombian (some without documents), they were taken without just cause to the penitentiary in La Yaguara. Some were able to escape,  were others were returned to Colombia due to serious health problems, and José Hernández died in his cell. This past November, a Venezuelan judge agreed that there had been an error in imprisoning the detainees and confirmed their innocence. Nevertheless, 59 remain behind bars because Néstor Reverol, Minister of Interior and Justice in Venezuela, has not authorized their release.

In the cases of Juan Pedro Lares and the 59 detainees, the Ministry of Foreign Affairs has carried out more than 60 actions of attention: they have documented the incidents, answered several rights to petition, completed consular visits to detention centers, and achieved permission for family members to visit the detainees. However, the Ministry has achieved nothing in terms of liberation.

In the face of this reality, the repeated question from victims’ family members is: “If the Ministry’s strategies are not producing results, why has Minister Holguín not taken a public stand on such a sensitive issue?” At the moment, it is certain that 60 innocent Colombians are imprisoned in Venezuela—but that number could be 70, or 100.

The experience of Brazil could serve as an example for Colombia. This past December, the arbitrary detention of Jonatan Moisés Diniz in Venezuela created diplomatic tensions between the two countries. As a result of the controversy, the young Brazilian was released and allowed to leave the country 11 days after being detained. He was accused by the Chavista leader, Diosdado Cabello of being part of a “criminal organization. According to Cabello, the NGO Time of Change, to which Diniz belonged, served as a facade to bring money into Venezuela to fund social causes for the homeless.

From Brazil, the office of Aloysio Nunes, Minister of Foreign Relations, demanded that Venezuela send information about the young man. Upon not receiving anything, he ordered the Foreign Consulate in Caracas to express their concern to Venezuelan police authorities, again request the location of the detainee, and demand a visit with the Embassy.

Although these requests were also not met with a response, the Brazilian Embassy in Caracas continued pressuring both Venezuela’s Ministry of Foreign Affairs and security authorities in the country for information on the young man’s whereabouts. On January 6, Jonatan Moisés Diniz was released and sent to the United States, where he currently resides.

In the case of Colombia, Minister Holguín has never publicly addressed the situation of Juan Pedro, despite the fact that the media—such as Caracol Televisión—has asked her to remark on the situation, and despite the fact that Juan Pedro’s mother, Ramona Rangel, has requested her help through letters and interviews. On one occasion, Ramona even traveled from Venezuela to Bogotá to try to meet with her, without success. 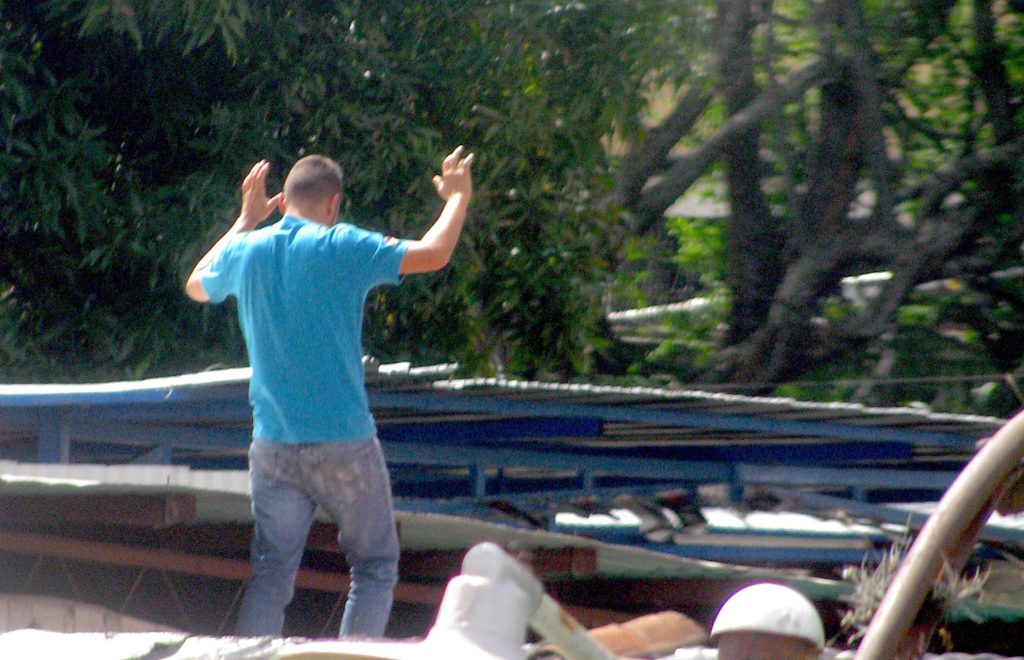 The moment in which Juan Pedro Lares was detained by SEBIN agents in August of 2017. Photo: Personal Archive

Regarding the 59 prisoners in La Yaguara, the Minister has explained in radio interviews that they have been looking after the detainees throughout their time in prison and that, with respect to the liberation demand, they have been in constant communication with their Venezuelan counterpart, Jorge Arreaza: “We have not been able to [bring about their release]; we keep insisting, but they remain imprisoned,” said Holguín on Caracol Radio this past November.

For his part, the lawyer of the victims, Venezuelan Sergio Aranguren claims that in his attempt to bring the case to international attention, he asked the Colombian Ministry for copies of the diplomatic letters in which Colombia requested that Venezuela comply with international treaties and release the Colombian prisoners. To date, he has not received a response from the consulate.

“These people are living in miserable conditions. People with no previous criminal record are eating once a day next to places filled with excrement, they have scabies in their skin; they are malnourished, depressed, they have tried going on hunger strikes and some have nearly died. It is incredible that no one is paying attention. We are at the political whim of a minister who would rather not talk about the subject,” says Aranguren from Caracas.

The uncertain reality of the Colombian prisoners in Venezuela led to December 1, when the Colombian Attorney General’s Office called upon the Ministry of Foreign Affairs, asking that they present a plan of legal assistance for the detainees within five days, and from there seek the protection of the prisoners’ rights and their immediate release. The minister’s response was to the tune of, “we have done all that we can,” repeating that since the detentions became known, her team has stood by the prisoners, “but it has not been possible to win their release.” 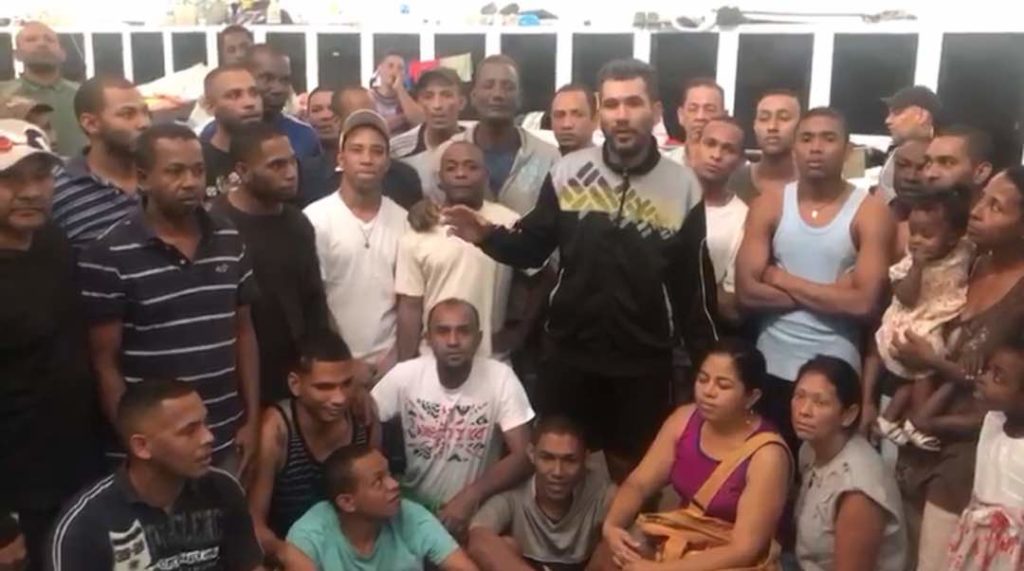 The men have been imprisoned in the detention center in La Yaguara, Caracas for one year and four months. Photo: Sergio Aranguren

These declarations have increased frustration among the family members of victims, who continue demanding that the Colombian government exhaust every option they have to achieve the release of the innocent prisoners. “We have, on various occasions, asked the minister to publicly declare the detention of our son. It is time for her to take political leadership, to at least add to the denunciations we have made before the Inter-American Court of Human Rights and the UN Working Group on Arbitrary Detentions,” says Omar Lares, ex-mayor and father of Juan Pedro.

“The Colombian government cannot abandon its nationals in other countries, much less when it has been clearly demonstrated that they have not committed any kind of offense. President Santos has the power to request, at the very least, their return,” Martha Yépez told the newspaper, El Heraldo. Martha is the sister of Dolier Yépez, Barranquilla resident imprisoned in La Yaguara.

“In almost six months, I have only seen Juan four times. We had to leave Venezuela for fear that something could happen to my other children, and now I feel that if I go to visit him, something will happen to me. He has not committed any crime, and I fear for his safety. I know that the minister can do more than she has done so far,” says Ramona Rangel.

The lawsuit against the minister

In the search for answers and more forceful actions by the minister, this past December Ramona Rangel decided, with the support of Dejusticia, to legally demand that the Ministry protect her son. The Ministry is the entity charged with watching over the rights of Colombians abroad, and with guaranteeing that other countries (in this case, Venezuela) respect the rights of those who remain deprived of liberty.

In the case of Juan Pedro, it is undeniable that the work of the Ministry has been key in allowing Ramona to visit her son in jail and to confirm that he is still alive; but even still, after almost six months of imprisonment, Minister Holguín has not officially recognized the arbitrary detention of Juan Pedro as Ramona has requested. They have also not shared with Ramona information from the consular visits that describe the detention conditions and the health of her son, nor have they explained to the family the strategy they plan to use to secure his release.

For these reasons, and for fear that Juan Pedro could become victim of forced disappearance or torture (as of yet there is no official registration of Juan Pedro’s entry into the El Helicoide prison), Ramona filed a lawsuit against the minister on December 5 before a Colombian Court in Cúcuta, where ex-mayor Omar Lares, father of Juan Pedro, lives in exile.

The complaint seeks two things: the protection of Ramona’s fundamental right of petition—seeing as the minister has not responded adequately to the mother’s petitions—and the evaluation of whether or not the minister has responded to the arbitrary detention of Juan Pedro with the urgency that it deserves, using the proper mechanisms. 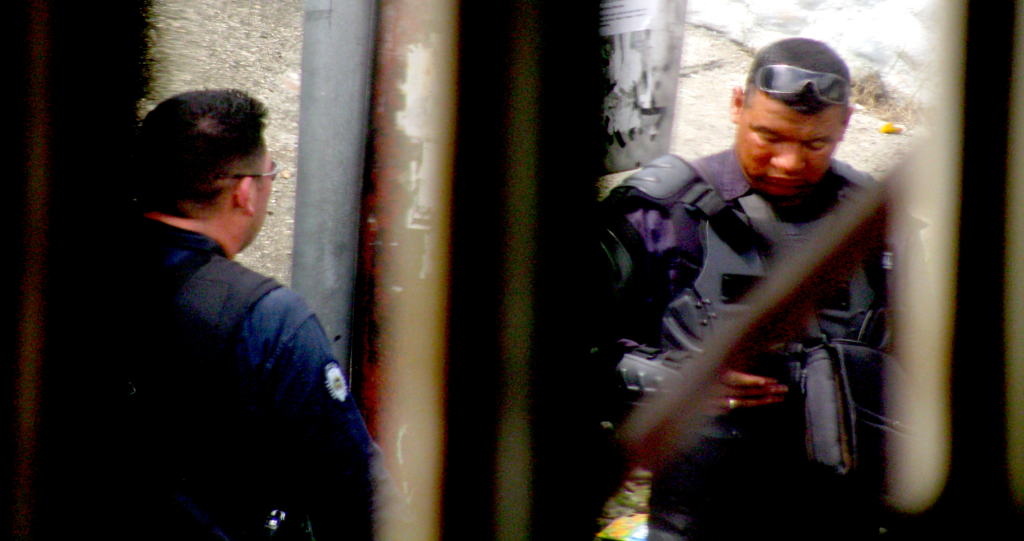 On December 18, Judge Socorro Jeres Vargas ruled the case in favor of the minister, considering that the right of petition of Ramona Rangel had not been violated, as the Ministry had maintained constant communication with the mother (in spite of information submitted showing that the communication was incomplete). The judge completely omitted the second petition, and did not order the minister to take all legal measures and actions at her disposal to achieve the release of Juan Pedro.

In response, on January 15, Ramona Rangel appealed the judge’s decision, requesting that the court recognize the violation of her right to petition and order the minister to guarantee the rights of her child, acknowledge the arbitrary detention, and take action to secure his release.

Although the decision to release or not release Juan Pedro is in the hands of Venezuelan authorities, what is certain is that the minister must intervene from Colombia for its citizens in Venezuela—and, if necessary, take the case before the international community or, at the very least, equal the efforts of victims’ family members to assure that their sons, brothers, and nephews do not remain one more day in prison.