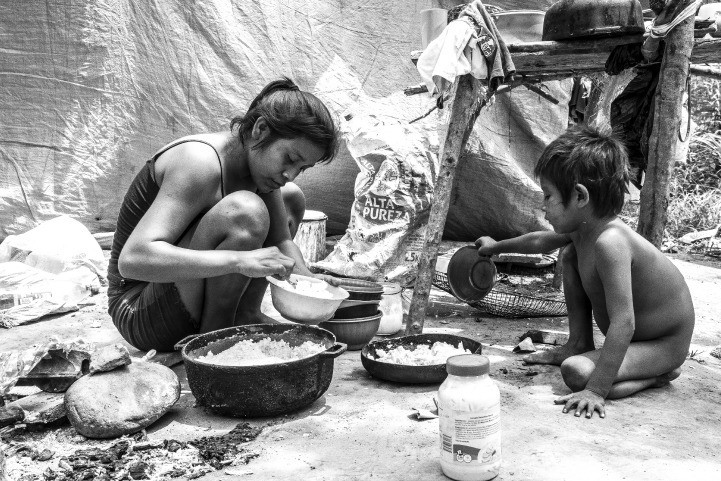 They have now spent a year in Colombian territory, displaced by the violence on the border with Venezuela. They need help and protection. | Angélica Cuevas |

One of Colombia’s greatest challenges as it relates to Venezuela’s migration crisis is the ethnic group who came from the neighboring country, having fled the crisis and asking to be recognized as binational citizens. They are some 300 people who decry the death of two of their children, the disappearances of some of their members, and the consistent threats they face.

On Thursday, May 17th, around 1 am, bullets broke the silence in the Cúcuta neighborhood of Escobal, located at the edge of the Francisco de Paula Santander Bridge that connects Colombia and Venezuela. There, abreast the Táchira River, some 300 indigenous Yukpa were sleeping under their huts made of sticks and plastic. They have been arriving from Venezuela over the course of the past year because hunger and sickness had forced them out of their ancestral territory.

“We had to run along the neighboring street, where we stayed until morning,” recounts Brinolfo Romero, a Yukpa professor who arrived from the Venezuelan side of the Perijá mountain range (there is a Colombian side). It is the Yukpa’s ancestral land. The next day, the Yukpa returned to their settlement and found bullet casings on the ground. They immediately began to collect their things without knowing where they would go next. During the year they have spent in Colombia, they have had to move to so many different places that when they settled in their terrain abreast the Táchira River they thought that they would finally be able to settle comfortably. But no.

On that day, while they were packing up what few possessions they had, a Yukpa man arrived battered and beaten. He told the group that an armed militia tried to deceive and kidnap him, but he managed to escape. “They tried to take him, he put up a fight, and managed to get away,”Brinolfo retells. This adds to the disappearance of two Yukpas over the course of the last two months, along with the fact that they have not stopped receiving threats to get them to vacate the territory, according to the community. The shootout on that Thursday was the straw that broke the camel’s back.

After the attack, they asked the Jesuit Refugee Service (JRS), one of the few organizations in which they can truly trust since they had been helping them since their arrival, to help them move. That afternoon they moved the children, women, elders, and a few men (106 people in total) to the Santander Park. Upon nightfall it was impossible to return for the rest because in Escobal, nobody can guarantee safety after dark. They say that the Rastrojos, the Clan del Golfo, and other criminal organizations operate in the area, all of whom are interested in controlling the trails through which contraband passes from Venezuela.

Read as well: The collective despair of Venezuelans passing through Cúcuta

Families were divided. The Cúcuta mayoral office and the government moved the Yukpas who got to the park to a shelter. Another group crossed into Venezuela. And a few others, some 40 people, stayed in their settlement and continue to be there. Who just shot? “The people from the mountains,” Brinolfo says. According to the mayor of Cúcuta, César Omar Rojas, the attack was not directed against the Yukpas, “it was in Ureña (the first Venezeualan town across the border). It was an attack against the National Guard stationed there.”And Felipe Muñoz, the Director of the Border Plan, says that the “incident is under investigation.”

The next day, the Jesuit Refugee Service put out a press release rejecting the attacks, saying that they “appreciate the effort and offers that the Colombian government and humanitarian organizations have presented [but] we do not consider the responses to be enough nor are they on par with standards of protection,”and reminded everyone that the abandonment and lack of protection that the Yukpas have had to endure has already left two victims: one child died on March 23rd from high levels of malnutrition, gastroenteritis and a cardiopulmonary arrest. Another child died on April 9th from a disease pattern of vomit and gastrointestinal infections.

One of these children was the son of Samuel Romero, the chief of one of the three communities who up until a week ago lived abreast the Táchira River. Samuel and his family buried their son in a cemetery in Cúcuta and upheld one of their communities’ grief traditions: a few days of complete silence. 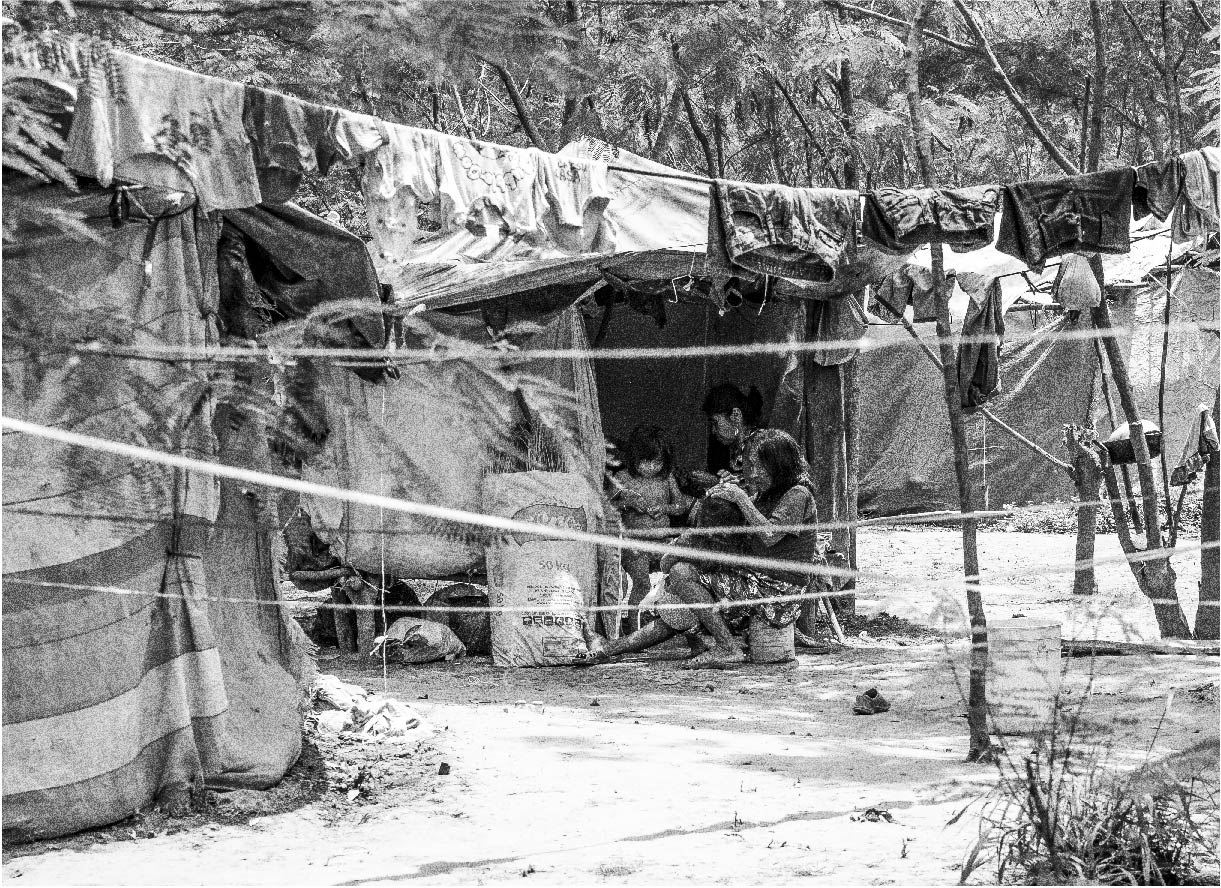 The Yukpa continue to wait for Colombia to recognize them as binational indigenous people. Photo: Angélica Cuevas

We met Brinolfo during the first week of May, on a fieldwork mission that us journalists at Dejusticia embarked on. At the time, sitting on a wooden log in his settlement, he told us the reasons that forced the Yukpas into a place foreign and far from the mountain ranges they had always occupied. “We have resorted to Colombia out of necessity, because of hunger,” he says. He later explains to us that they have spent a year waiting, and living in such miserable conditions, because here they at least “have plantains and rice. This is a lot, much more than what our brothers in the Sierra are eating.”

And yet they continue to wait for Colombia and Venezuela to recognize them as “binational indigenous people”, given that they have historically settled in the Perijá mountain range, a territory that the two countries share. Their cosmovision even defends that are all parts of the same community and that they do not recognize borders imposed by westerners. They are asking both countries for the same treatment that the Wayúus from Colombia’s La Guajira region receive, who are recognized as a binational community and protected by both governments.

“We are people without borders,” Brinolfo says. This is what the Peoples Defense repeated in a letter sent to the chancellor, María Angela Holguín, and the ONIC (Organización Nacional Indígena de Colombia, the country’s national indigenous organization) stated in a press release: both asked the Colombian government to declare the Yukpas a binational indigenous community. But a government source told us that it has been impossible to tend to this petition for one reason: you need a binational agreement to complete the recognition, “that there be political will on both sides,”and although Colombia sent a petition to Venezuela last December 11th,  they have yet to get a response.

A year ago, a rumor seeped its way into Venezuela’s Perijá mountain range — located in the state of Zulia — that there was a Colombian city named Cúcuta that at least had rice to eat. The indigenous Yukpas were so hungry, and the children and the elders were so sick, that they had nothing to lose. A group of took with them what they needed to survive three days of travel and, desperate, started on their journey by donkey, bus, and foot. The humanitarian crisis in Venezuela was unbearable. ““It took us between three and six months to gather three sacks of yucca, and they bought it from us for ridiculously cheap,” said Brinolfo, a leader of the neighboring Yukpa community that sits just a few steps away from this one and is led by Chief Henry. For those three bags of yucca they were paid some one million bolívares (Venezuelan currency), the man explained, and that money hardly covered the cost of one kilo of rice. That is no way for someone to survive.

Until the attack on May 17th, the Yukpas were organized into three groups, all settled along with Táchira River. The waters of the river where they bathed and even got water to cook were brown, dirty, and odorous. This explains why the children have skin covered in rashes and stomachs inflated with parasites.  That being said, what they did not lack since they arrived was their precious rice, as Sonia Martínez says it, an indigenous Yukpa girl who lives in the second settlement next to Brinolfo’s. These are two sister communities but with different chiefs. They are the most traditional, the ones who have best conserved their customs

The third community, located below the bridge, is recognized as the most “western”, “most civilized”group, according to the words of their chief, Remiljio Segundo Romero. Remiljio also proudly accepts that, as they authorities and media outlets say, they are smuggling contraband food from Venezuela. “We smuggle oranges and avocados, although the press has slandered us by saying we smuggled meat.” This is what the authorities maintain: the indigenous people are transporting scrap metal and meat from Venezuela, and that there exist criminal networks that they are using.

They are three very different communities. But the problem, the big question, is that there exist media outlets and entities within the government who have taken it upon themselves to stigmatize the Yukpa, signaling that “all Yukpa” are contrabandists. And this has left the Yukpa exposed, even more vulnerable than they were before.  Furthermore, some public officials issued statements that seems to justify the attack on Thursday May 17th against the indigenous group, for being “contrabandists” and being connected to criminals who troll the trails.

This episode inspired the government to construct a “concerted plan of return,”that intends to get them all back to Venezuela within the week. But this idea is not new. During the past year, they have dumped them on the other side of the border at least 3 times, and they also come back to Colombia, because here they at least have food and medicine. The ONIC has reported that these forced returns have been made “without planning nor differential guarantees.”Professor Brinolfo insists that Venezuela is not an option for them. “We are going to stay here until Colombia hears us. Until they give us help. Until they provide us with security. But to Venezuela we are not returning.” 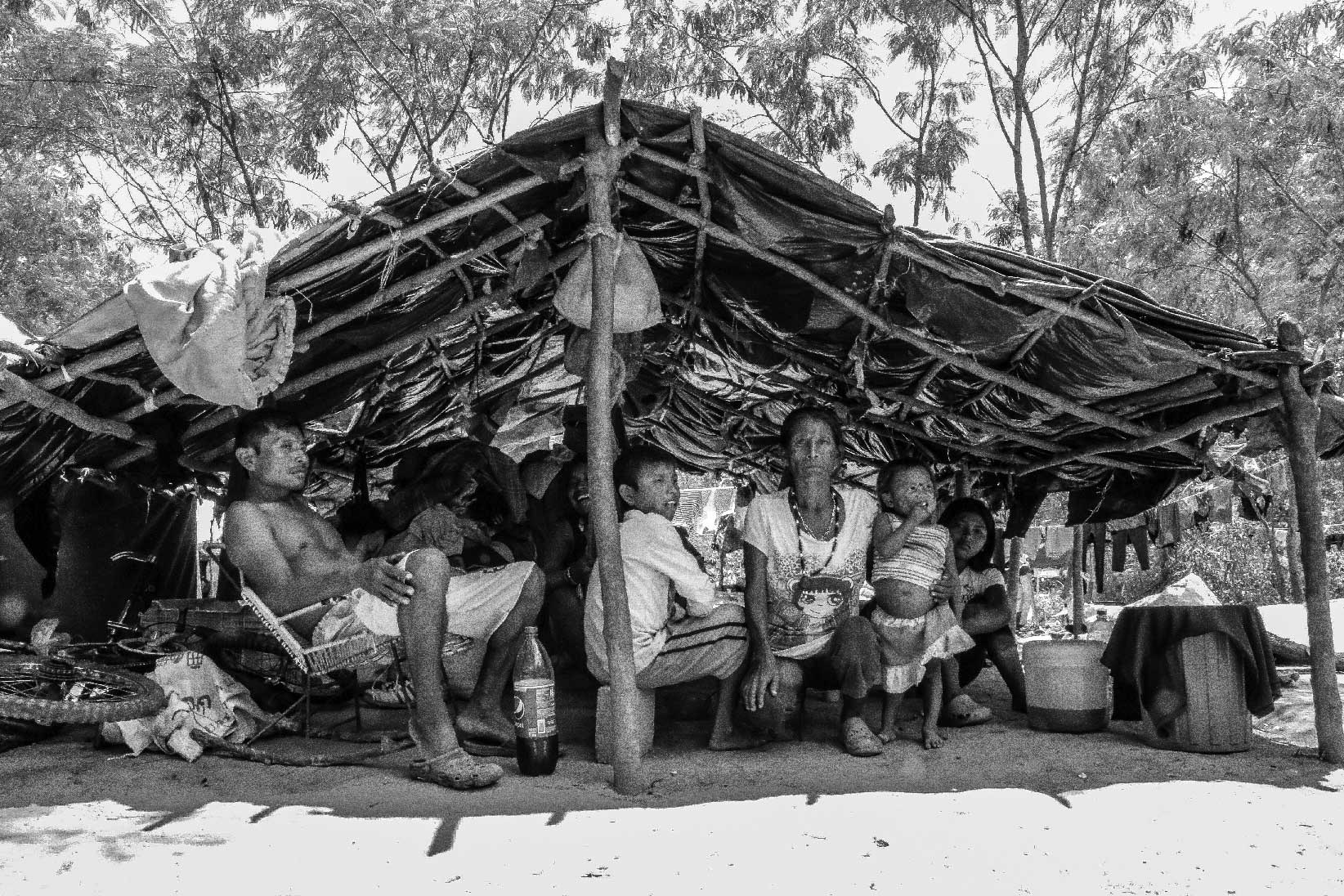 Without a doubt, the situation that the Yukpa find themselves in is one of the greatest challenges Colombia faces with the Venezuelan migration crisis. Photo: Angélica Cuevas

For some organizations, like the Jesuit Refugee Service, the Colombian government should consider the Contingency Plan for Inter-Urban Forced Displacement before forcibly returning a vulnerable community who does not have guarantees in Venezuela. The Plan, amongst other measures, enshrines the Law of Victims and promises “the activation of special protections for ethnic groups, the communal cohesion according to their customs, and non-repayment.”

This is also being asked by a tutela that is currently active in a court in Cúcuta: that they pay humanitarian attention and that they guarantee the bare minimum of living conditions, keeping in mind their condition as special subjects of protection.

Without a doubt, the Yukpa’s situation is one of the greatest challenges Colombia faces with regards to the Venezuelan migration crisis. But a year has now passed and the government has had enough time to think about what measures of protection that go beyond forcibly returning them to the place they fled out of hunger. This, as the UN Refugee Agency (UNHCR), the Peoples Defense, and the ONIC have insisted, would be an entirely new violation.