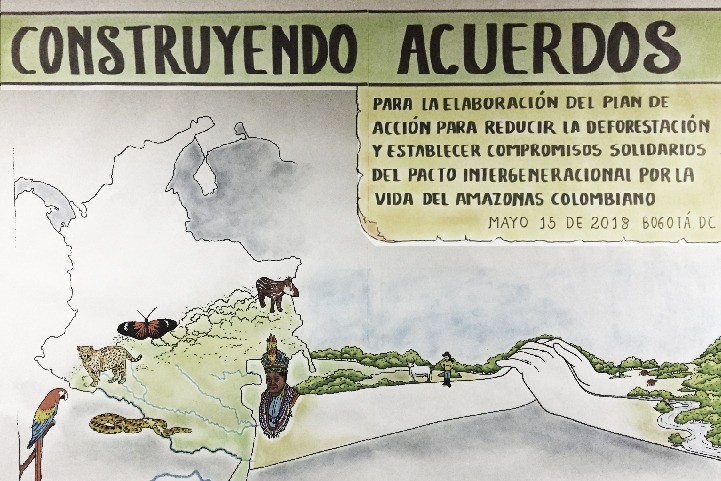 Dejusticia and the Ministry of Environment met with government agencies, academia, and civil society to build together a path forward to comply with the Court’s orders to stop deforestation in the Amazon.

How to guarantee that the Supreme Court of Justice’s decision in favor of 25 youth, who filed a lawsuit against the government to demand zero deforestation in the Amazon, does not just stay on paper? On Tuesday, May 15, Dejusticia (representing the plaintiffs) and the Ministry of Environment met with government, academia, and civil society representative in order to build together a model that allows compliance with the Court’s orders to stop rampant deforestation in the Colombian Amazon.

“It is important to involve not only government entities, but also academia, civil society, and the media, because the Amazon problem is not isolated, it’s everyone’s problem, ” said César Rodríguez Garavito, Dejusticia’s director.

The first lawsuit on climate change and future generations in Latin America was filed on January 29. The plaintiffs are 25 children and young people from 17 cities across Colombia, who claim that deforestation in the Amazon and its effects on climate change threaten their rights to a healthy environment, life, health, food and water.

You may also like: In historic ruling, Colombian Court protects youth suing the national  government for failing to curb deforestation

On April 5, the Supreme Court of Justice adopted the plaintiffs’ petitions and issued a series of measures ordering the government to comply with its prior commitment to stop deforestation in the Amazon forest by 2020, which had been reiterated during the 2015 Climate Change Summit in Paris. The country is still far from meeting that goal: deforestation increased by 44% in 2016 according to recent figures.

To enforce this commitment, the Court issued a series of orders to the government and the 25 young plaintiffs, and also called on academia and the rest of society to participate in the creation of a plan to protect the Colombian Amazon. Among these orders, there are two main ones: to build a short, medium and long-term Action Plan to stop deforestation (within four months), and to create an Intergenerational Pact for the Life of the Colombian Amazon (within a five-month period).

Tuesday’s meeting – where delegates from the Ministries of Environment, Agriculture and Transport, the Amazon Mission, the General Attorney’s Office, the Police, the SINCHI research institute, autonomous corporations, indigenous representatives and Afro-descendants came together – was a space where different stakeholders began building these two plans. “The idea is to build on the government’s efforts and tackle the bottlenecks. The sentence is not intended to reinvent the wheel, but to mold and refine, as with a precision scalpel, those strategies. We are already late in taking decisive action, “said César Rodríguez, who is also the young petitioners’s lawyer.

Here is the video that Dejusticia created to explain the lawsuit

The crux of the lawsuit is to combat deforestation as the main source of greenhouse gas (GHG) emissions in the country. César Rey, the technical director of Forest Management at the Ministry of Environment, said this himself: 1 out of every 3 tonnes of GHG released into the atmosphere come from deforestation, while 60% of the country’s deforestation is concentrated in the Amazon. Additionally, 90% of national deforestation takes place in post-conflict municipalities.

In the construction of the plan of action against deforestation, several bottlenecks and challenges surfaced: to create environmental (and climate change) education programs with ethnic and gender-specific approaches, to generate greater diffusion and access to information that already exists on this problem,  to strengthen the presence of authorities such as the Police and the General Attorney’s Office in the territories, to promote greater inter-institutional coordination, to allocate a greater budget for this specific purpose, among others.

We invite you to read:

Here is how litigation for the planet won in Colombia

The second goal of the day was to begin building a pact between generations to protect the life of the Amazon, which the Supreme Court recognized as a subject of rights. The pact has a two-fold purpose: to reduce deforestation to zero and reduce greenhouse gas emissions. The idea is that this document consists of what different sectors in society commit to – businesses, schools, universities, social organizations, consumers – to achieve that goal. These actions could be preventive, corrective, mandatory and/or pedagogical.

The speakers agreed on the need to “accelerate” the construction of these plans, “so that the next government understands that it is something that cannot be undone” as Wendy Arenas, environmental adviser for the High Commissioner for Postconflict, said.

The pact to protect the life of the Amazon is still under construction. Everyone can participate by sending their ideas to: [email protected]

The Amazon is burning