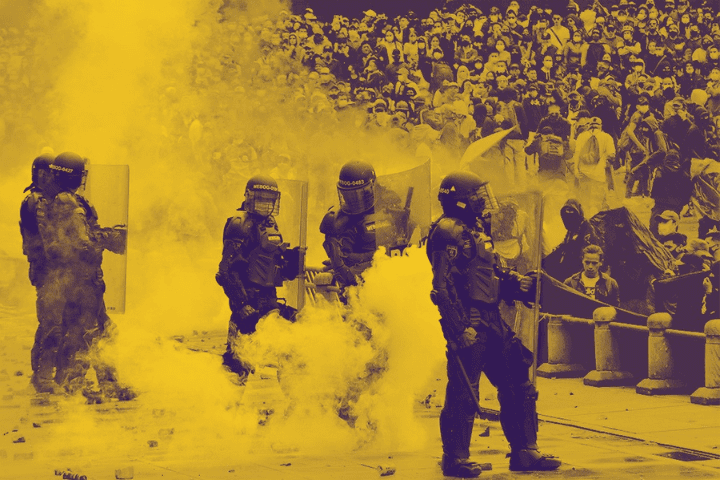 We urge police authorities to reaffirm their role as guarantors of the life, honor and property of citizens; the Ombudsman’s and Inspector General’s Offices to wake up from their slumber and fulfill its role in this crisis, and Iván Duque's government to create mechanisms for dialogue and citizen consultation that allow the voices of all sectors to be heard and heeded. | EFE with own contributions

For the allegations of human rights violations during the current national strike, we call for compliance with the orders issued by the Supreme Court of Justice for these contexts.

Diverse social sectors took to the colombians streets since last Wednesday, April 28, in response to a call for a national strike, mainly due to the filing of a tax reform bill that had little participation and could accentuate the socioeconomic inequalities triggered by the COVID-19 pandemic. Despite the decision of the President of the Republic of Colombia, Iván Duque Márquez, to withdraw the bill, protests continue amid serious human rights violations reported by social organizations: Disproportionate use of force by the police, killings and disappearances of demonstrators, cases of sexual violence and abuse, eye injuries, arbitrary arrests, use of firearms, and violence against law enforcement officers, as reported by the media and citizens on social media.

Dejusticia is concerned about these events, which violate the Political Constitution and international standards that protect the right to protest. Furthermore, the action of law enforcement officers during these days constitutes a clear violation of the orders given by the Supreme Court of Justice in September 2020, which protected the rights of the people who protested during the day known as #21N.

Although the Supreme Court ordered the Government and the National Police not to repeat the violent events reported last year, such as the arbitrary suppression of peaceful protests, the anti-regulatory use of potentially lethal weapons, the arbitrary detention of people during the protests, and attacks on journalists, it is alarming that these patterns of violence against demonstrators persist, while attacks on members of the public force are recorded.

At the same time, the deficient role of the Ombudsman’s and Inspector General’s Office is worrisome. The Office of the Ombudsman and the Office of the Inspector General have the duty to accompany the demonstrators and support the systematization and reporting of information on human rights violations during the protest. For its part, the Office of the Attorney General of Colombia should be active in the impartial and independent investigation of alleged offenses and crimes and promoting the prosecution of those responsible. But all these bodies are absent. In the meantime, the central government makes dangerous announcements, such as the use of military assistance in major cities, and local officials publicly refer to “riots” and “vandalism” being caused by Venezuelan migrants, even expelling some of them, as happened in Cali.

Therefore, Dejusticia emphatically rejects all abuses and the violent response to peaceful protest, as well the attacks to public force members. We also condemn the xenophobic expressions of rulers and the silence of the control bodies in the face of the clear human rights violations of recent days, and the stigmatization of those who invite and participate in the protests.

We urge police authorities to reaffirm their role as guarantors of the life, honor and property of citizens; the Ombudsman’s and Inspector General’s Offices to wake up from their slumber and fulfill its role in this crisis, and Iván Duque’s government to create mechanisms for dialogue and citizen consultation that allow the voices of all sectors to be heard and heeded. The withdrawal of a tax reform bill is not enough for a country with exacerbated sentiments about growing violence and inequities accentuated by the pandemic.

Finally, we ask international organizations, especially the Inter-American Commission on Human Rights and the Office of the United Nations High Commissioner for Human Rights, to urgently verify the events of the last few days in Colombia and produce reports to determine the magnitude of the human rights violations and those responsible for them.

If you are a journalist and require additional information, please contact Mariana Escobar Roldán at [email protected]