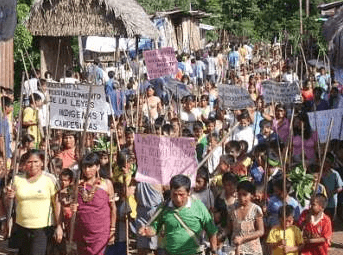 In the coming days, it is expected that a judgment will be rendered in the so-called “Devil’s Curve” trial against 53 people.

In the coming days, it is expected that a judgment will be rendered in the so-called “Devil’s Curve” trial against 53 people, including members and leaders of indigenous communities accused of killing 12 police officers and wounding 18 others in 2009, in Bagua, Amazonas Region.

Six years after the tragic events in Bagua, which resulted in the deaths of 33 people, including 23 police officers, and serious human rights violations, this trial offers Peru an opportunity to start to fulfil its obligation to guarantee the right to the truth, justice and reparation for the victims and their families.

The undersigned organizations have been following this case since 2009 – including the investigations and judicial proceedings undertaken to ascertain who was responsible for these deeply regrettable incidents – and we urge the authorities to ensure scrupulous respect for the defendants’ right to due process in this search for justice. This will be the only way to guarantee the right to truth, justice and adequate reparation for the victims and their families.

It is the right of the victims’ relatives, the defendants and the general population to demand that justice be served independently and impartially; for that, it is essential that the sentences against the 53 defendants be based solely on facts that have been proven by solid and irrefutable evidence. If the state is unable to prove the defendants’ individual responsibility for the suspected crimes, they must be released immediately and unconditionally.

Guaranteeing a fair trial is a fundamental requirement in any legal proceeding, but is even more vital in this case, where those standing trial include members of indigenous peoples that have been marginalized and had their human rights violated for decades. It should be recalled that when the indigenous demonstrators blocked the public highway in Bagua, they did so in defence of their rights and as a last resort given the complete unwillingness of the authorities to listen to and address their concerns.

In this context, the undersigned organizations remind the authorities that in order to guarantee a fair trial for the defendants, they must be afforded equal treatment before the law. For the members of indigenous peoples, this means taking into account their customs, normative systems and world views.

As this trial only concerns part of a tragedy that cost the lives of 33 people, it is also essential for the state to guarantee the right to the truth, justice and reparation for all the victims who suffered abuses and violations as a result of that police operation and the clashes and violent acts that ensued. The “Devil’s Curve” trial should be the first step towards clarifying full responsibility for all the events that occurred in Bagua Province on 5 June, in accordance with the law. For that, it is crucial for the other proceedings to move forwards so that responsibility can be established at all levels, including among members of the law enforcement agencies and government authorities.

The state also has the duty to ensure that such abuses are not repeated. Therefore, it is essential that measures continue to be taken to safeguard the rights of indigenous peoples, including their right to free, prior and informed consent, and their right to ancestral lands and livelihoods, finally putting an end to the discrimination to which they have been subjected for generations.

In 2009, thousands of indigenous protesters blocked a road for more than 50 days in Peru’s Amazonas Region to protest against a series of decrees that, in their opinion, affected their fundamental right to land and natural resources and, therefore, their means of subsistence.

On 5 June, 33 people, including 23 police officers, lost their lives and at least 200 protesters were wounded when police intervened to clear the road. The police used excessive force to disperse the demonstrators and, in the process, allegedly wounded and killed people unrelated to the protest. Dozens of people who were arrested that day later filed complaints of ill-treatment by police officers.

These events gave rise to six criminal proceedings, including the so-called “Devil’s Curve” and “Station 6” cases against indigenous defendants for the deaths of the 23 police officers. A further two proceedings, in Bagua Chica and Bagua Grande, were brought for the deaths of civilians, including political figures from that time; these two cases have not progressed and one of them has been shelved.